Public payphones have fallen on hard times. Once a crucial aspect of public services and city living, time and technological change have turned payphones into an urban feature whose utility and value has been called into question. But in truth, public phones still play a crucial role in the lives of our cities. Hence why Public Utility - a consortium of entrepreneur's, urban designers, policy makers & students - has launched the Public Utility Challenge - Innovate Payphones.

With a prize of $25,000, Public Utility is looking for proposals that leverage smart city technologies and design features to revitalize cities aging payphone. These proposals can come from students, design professionals and technologists who are committed to making payphones a part of our future, as well as our past. And not surprisingly, Public Utility is not alone in wanting to make this kind of revitalization happen.

New York City, one of the largest cities in the world (and arguably the hub of the global economy) is mounting a similar revitalization effort. In recent years, the city committed to upgrading 10,000 of its public phones by converting them into public Wi-Fi hotspots. These kiosks (known as "links") will not only provide free internet access, but also free domestic calls using cellphones (or a built-in keypad), access to city services and directions, and a charging station for mobile devices.

Back in 2013, Mayor de Blasio's office put out the call for proposals on how New York's payphones could be updated. Known as the Reinvent Payphones Design Challenge, this competition elicited more than 125 submissions from urban designers, planners, and technologists from across the county. In the end, the contract for the upgrade was awarded to CityBridge, a consortium of companies including wireless giants Qualcomm and Titan. 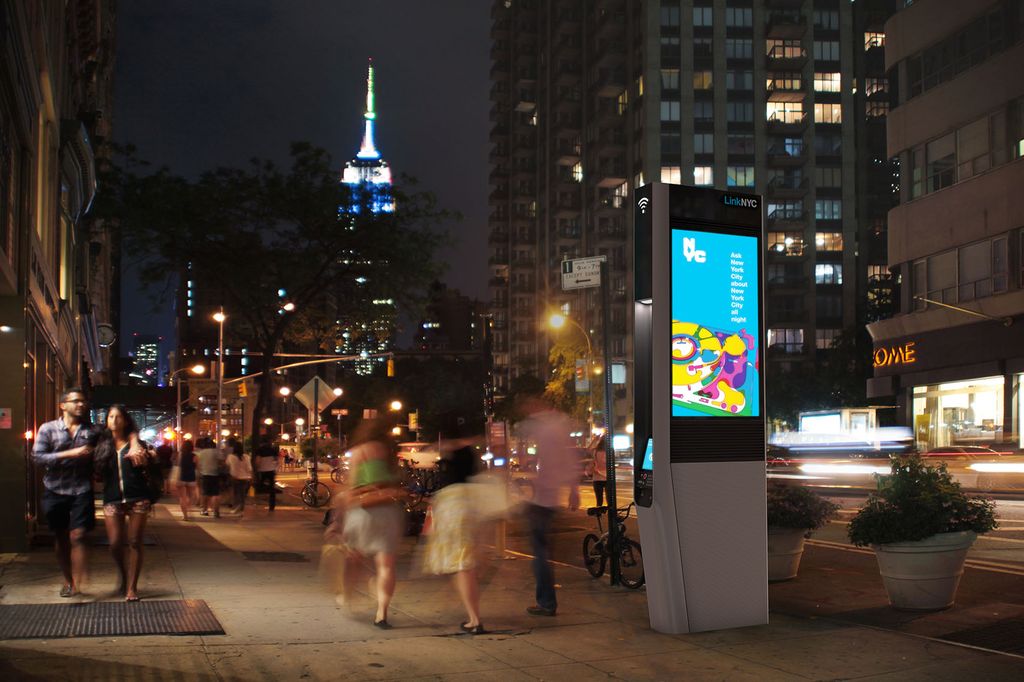 The initiative has since come to be called LinkNYC which, according to the administration, is in keeping with the Mayor's focus on inequality in New York City. As Maya Wiley, counsel to the Mayor, explained, certain demographics (notably African-American and Latino populations) rely disproportionately on payphones. As she summarized, LinkNYC is "going to help us close the digital divide."

The initiative will cost an estimated $200 million and will be paid for by advertising revenues from the kiosks’ digital displays. This past January, the first kiosks began to be installed on the city streets, and are reportedly able to provide a connectivity range of about 45 meters (150 feet) and speeds up to 20 times faster than a typical home connection.

This move highlights one of the enduring uses of payphones, which is in how they provide unlimited communications to people who might not otherwise be able to afford a mobile device. In short, they are a great leveler. In addition, during times of crisis, when cellural providers and internet services become compromised, they are the primary means of communication between citizens and emergency services.

It is little wonder then why there is a move on to prevent this public utility from becoming obsolete. In the end, all it seems to need is a little tender-loving care - a bit of a makeover for the digital age.

Do you have ideas on how payphones can be revitalized? Then head on over to the Public Utility Challenge - Innovate Payphones for more information and a chance to win the $25,000 prize!

more like this
GOVERNMENT TECHNOLOGY
comments
most popular
Healthcare
How to Poop In Outer Space
Non-Profit & Social Impact
All Charities Should (Ultimately) Self-Destruct
Healthcare
NASA Launches the Space Poop Challenge
Government
Embrace the Chaos: Designing for an Antifragile Future
New Partnership Boosts Crowd-Powered Fact Checking Challenge
Hear about new challenges first by signing up to our newsletter
Government
Safety Standards for Personal Protective Equipment
PPE is critical for the safety of workers in many fields and industries, but what are the standards for adequate protective clothing, how are they developed, and how they are used?
3 min read
Energy, Environment & Resources
How other industries are utilizing the Circular Economy and questions we should ask about the agricultural industry
The issues of waste and resource depletion are apparent across industries. This is why we’re seeing more and more companies adopt a Circular Economy. What value is the model bringing to the companies that have adopted it? Can any lessons be transferred to the agricultural industry?
2 min read
Energy, Environment & Resources
Current trends in modern agricultural practice
To bring about sustainable change, we need to adopt circular methods. This is why we’re seeing many circular trends emerging in the agriculture sector from vertical farming to lab-grown meat! Let’s dive further into the revolutionary technology that’s paving the way for new possibilities.
2 min read