Lady Liberty: a Gift for the People, By the People

This article was selected as a winner of the Crowd Content - Feed the HeroX Blog! Challenge. Lance McNeil is also an active innovator AND challenge sponsor on the platform. You can learn more about Lance on his profile. Interested in contributing something yourself? Crowd Content is still open for entry!

Crowdsourcing may have become a household name over the past 10 years, but it is certainly not a new concept. In fact, one of the earliest and most inspiring examples of crowdsourcing stands proudly on Liberty Island in New York, as a beacon of freedom and democracy for the entire world to admire.

The Statue of Liberty cost approximately $250,000 to build (in 1880 dollars) and was paid for by the French people - not the French government - through a creative fundraising effort that we recognize today as crowdfunding[1]. As a comparative value, $250,000 in 1880 would be the approximate equivalent of over $5 million in 2017 dollars.[2]

As America’s Civil War came to an end in 1865, French scholar, Edouard de Laboulaye, began brainstorming about how France might demonstrate their solidarity with the war-torn re-United States.[3] He saw the abolishment of slavery in America as a milestone for freedom and democracy, and he sought a monument that would reflect those ideals. One of the biggest obstacles for Laboulaye and his team was how to fund such a monument.

To help raise money, the Statue of Liberty’s sculptor, Auguste Bartholdi, created some of the first known crowdfunding perks/rewards when he produced 6” and 12” Lady Liberty statuettes and engraved contributors’ names on the bottom[4]. The 6” statuette sold for $1 and the 12” statuette sold for $5.

The figure to the right is one of the original statuettes available for viewing at the Statue of Liberty National Monument Park.

Through their grassroots effort, the French people raised enough funds to build the actual statue, but left the United States responsible for funding the platform that Lady Liberty stands on today. The 1880s were still a difficult time for our country and after a prolonged Civil War and Reconstruction, and Uncle Sam’s purse strings were still pulled tightly. A little more than halfway through the construction of the platform, funding dried up and the entire project stood on the brink of failure. The picture below shows the pedestal under construction[5].

A federal bill to fund the $100,000 needed to complete the construction of the pedestal failed to pass appropriations. A separate initiative put forth by New York’s state government to fund the project up to $50,000 passed the legislative branch, but was vetoed by then Governor, Grover Cleveland. Just when it looked like Lady Liberty would be spending the rest of her days in France, Joseph Pulitzer stepped up with a solution – crowdsource the funds needed to pay for the construction of the pedestal. 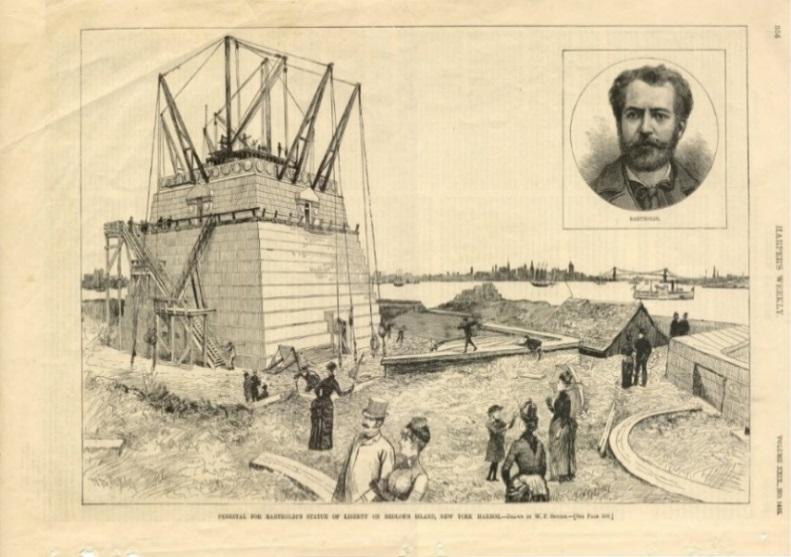 Joseph Pulitzer[6], best known today as the namesake for the Pulitzer Prize, decided to appeal directly to U.S citizens to fund the remaining project costs[7]. He used his newspaper, The World, to reach citizens in mass: 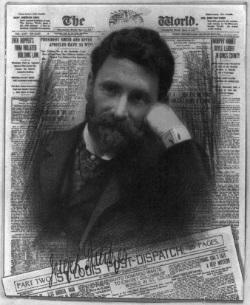 “We must raise the money! The World is the people's paper, and now it appeals to the people to come forward and raise the money. The $250,000 that the making of the Statue cost was paid in by the masses of the French people- by the working men, the tradesmen, the shop girls, the artisans- by all, irrespective of class or condition. Let us respond in like manner. Let us not wait for the millionaires to give us this money. It is not a gift from the millionaires of France to the millionaires of America, but a gift of the whole people of France to the whole people of America.[8]”

This direct appeal led to a sixth month fundraising effort with 125,000 Americans contributing a combined $100,000. The value of that $100,000 in 2017 dollars is just over $2.3 million. Between 2008 and 2015, the Statue of Liberty received over 28 million visitors, and at an average ticket price of approximately $10 per person, the revenue generated by those visitors over that seven year period exceeded $280 million – not a bad return on investment.[9]

The funds raised were enough to complete the construction of the platform. Mr. Pulitzer led by example, contributing $250 of his own funds[10]. The average contribution was only 80 cents per contributor, making it a truly a grassroots effort.
In recognition of citizens’ generous contributions, Pulitzer published the names of the 125,000 Statue of Liberty “backers” in his newspaper[11]. This kind of recognition as a perk/reward is still popular in many successful crowdfunding campaigns today on platforms like Kickstarter and Indiegogo.

I share this story to highlight the democratizing power and potential of crowdfunding and crowdsourcing innovations. Online crowdfunding has become a groundbreaking new financial frontier that creates opportunities for entrepreneurs, artists, do-gooders, and anyone looking to access capital for their projects. Almost anything imaginable is possible without the barriers of traditional capital loans or investment.  Through social media, online payment processing and the transparency of crowdfunding platforms, we are able to achieve the fundraising success realized by Pulitzer over a 5 ½ month period, in just 4-6 weeks. Crowdfunding is giving people the freedom to fund what they believe in and for that reason, it is not only here to stay, but over time, it is something that will truly strengthen our democracy.

more like this
ARTS & DESIGN GOVERNMENT NON-PROFIT & SOCIAL IMPACT
comments
most popular
Healthcare
How to Poop In Outer Space
Non-Profit & Social Impact
All Charities Should (Ultimately) Self-Destruct
Healthcare
NASA Launches the Space Poop Challenge
Government
Embrace the Chaos: Designing for an Antifragile Future
New Partnership Boosts Crowd-Powered Fact Checking Challenge
Hear about new challenges first by signing up to our newsletter
The Fundamentals of Innovation: How new invention ideas become reality
Why is understanding innovation important? Although companies are implementing many new invention ideas, most organizations are having trouble keepin…
9 min read
Non-Profit & Social Impact
A Prize Competition Building the Future of Work: How Do You Rapidly Upskill US workers?
New Profit Unveils Top 15 Ideas For an Equitable Economy. The $6 million Future of Work Grand Challenge is powered by New Profit, JFF, XPRIZE, and MIT Solve
1 min read
5 Examples of Companies That Got Open Innovation Challenges Right
While a company might think it already has the best talent available, much innovation occurs outside the usual venues. In campuses, garages, and small offices worldwide, independent innovators find ways to apply modern technologies to age-old problems.
6 min read