Hydroelectric power has been looked to as a viable form of alternative energy for many decades. In addition to being a renewable way of generating electricity, it is also competitive when it comes to costs. Unfortunately, it also comes with its share of drawbacks. For one, the construction of large dams on major waterways can have a significant impact on marine life and their habitats; and the operation of such dams can even result in generating large amounts of greenhouse gases.

Looking to address this, an Oregon-based energy company known as Lucid Energy has come up with a new idea that could turn any city's plumbing into a working source of energy. Having launched in 2007, the company has spent many years designing water pipes that use drinking water to create electricity. With the help of the Department of Energy, the company debuted their LucidPipe with a pilot project in Riverside, California, and is now moving ahead with a full-scale project in the city of Portland, Oregon.

The process of the LucidPipe is quite simple. By replacing conventional pipes with a series of pipes that have electricity-producing turbines in them, the energy that is used to regularly pushed water through a city's plumbing can be tapped and put to good use. Much like conventional hydroelectric power, moving water is the key, but the application does not involve damming waterways, or turbines that can end up killing fish and marine mammals.

Gregg Semler, the president and CEO of LucidEnergy, and his collagues began the company with the hope of capturing energy from streams. But they soon found that their efforts were hampered by the difficulty in predicting the flow of streams, not to mention the environmental impact such operations can have. Human infrastructure, on the other hand, offered a solution to both problems.

For starters, using existing plumbing to create hydroelectric operations would have no additional impact on the environment. And when it comes to plumbing, water is pumped at a fairly constant rate, which means that pipes that can produce electricity would be able to provide a steady and reliable flow of power. But according to Semler, the best thing about this new technology is just how novel it is.

"What’s really interesting about Lucid is this is a new source of energy that’s never really been tapped into before," he said, in a recent interview with ThinkProgress. "You take the best of hydroelectricity and put it in the pipe.”

Another potential benefit is that the technology is drought-resistant. As the ongoing drought in California demonstrates, declining water supplies can have an impact on hydroelectric production. With the drought now in its fourth year, the state has been forced to shift much of its electrical production over to natural gas, which in turn has driven up prices. But drinking water is something that has not been effected, as cities make sure that it is prioritized, even in the event of a drought. 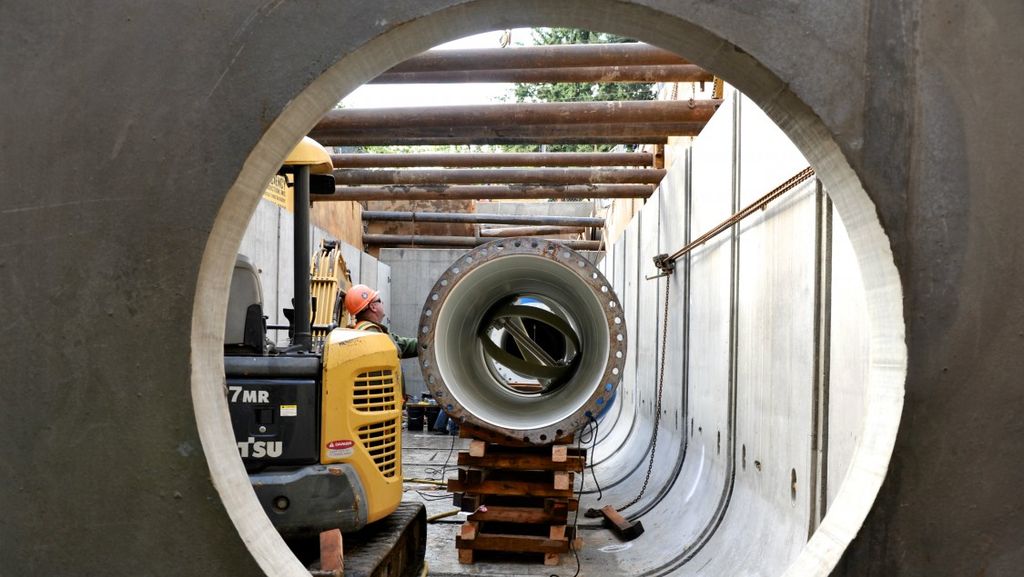 The LucidPipe comes in four sections that can be installed in a standard 12 meter (40 foot) section of water pipe. Credit: lucidenergy.com

The company's collaborative effort in Riverside, California, used the energy produced by their LucidPipes to power street lights. Their Portland project, however, is a bit more ambitious. With their system installed in just over 15 meters (50 feet) of Portland's water pipes, they are reportedly able to generate an average of 1,100 megawatt-hours of electricity a year, which is enough to power about 150 homes in the area.

Each LucidPipe consists of four sections, each one with its own 1 meter (42-inch) turbine that spins as the water flows inside. A single LucidPipe can be used to replace a standard section of city pipe, and each one has the potential to generate more than 3 megawatts of electricity. Doing the math, Portland has around 3220 km (2000 miles) of water pipes in the city. And according to estimates from 2006-7, the average annual electrical consumption by residential customers was 11,395 kilowatt hours.

This means that if the city were to replace its entire drinking water infrastructure with hydroelectric pipes like the LucidPipe, they would be able to generate 232 gigawatt-hours of electricity annually, which would be enough to power over 20 million homes a year! And while an upgrade of this size is certainly a bit of a pipe dream (no pun intended), it does show what is possible when the right kind of technology is leveraged to address an issue.

The project cost about $1.7 million, which was paid for by private investors. Over the next 20 years, the company expects that it will produce $2 million worth of energy, which will be divided between the company, the city of Portland, and a third-party investor. Looking ahead, the company plans to add their pipes to various cities around the world that are facing an energy crunch and are looking to upgrade their infrastructure.

These include Johannesburg, South Africa, which announced earlier this year that it would be using LucidEnergy's system to upgrade its water system. And according to Semler, the company has also been contacted by cities in China, Brazil, Canada, and Mexico that have expressed interest in the system.

Finding ways to adapt clean, renewable sources of energy to existing infrastructure is one of the big challenges of alternative energy. And with each passing year, more and more creative and innovative applications are becoming available for consumers.

Do you have ideas on how renewable energy could be made more effective and accessible? Then head on over to the Launch A Challenge page and be ready to make a difference!

more like this
ENERGY, ENVIRONMENT & RESOURCES TECHNOLOGY
comments
most popular
Healthcare
How to Poop In Outer Space
Non-Profit & Social Impact
All Charities Should (Ultimately) Self-Destruct
Healthcare
NASA Launches the Space Poop Challenge
Government
Embrace the Chaos: Designing for an Antifragile Future
New Partnership Boosts Crowd-Powered Fact Checking Challenge
join 87909 innovators
Get exclusive access to the latest crowdsourcing insights, inspiration and challenges from HeroX
Non-Profit & Social Impact
Why Crowds and Prize Challenges are the Solution to Sustainability
Forward looking corporations are already embracing crowdsourcing and prize challenges. Boeing, Unilever, Samsung, Starbucks and NASA are just a few examples. If several million people can be nudged to make a small positive change, the outcomes can be world changing.
4 min read
The Definitive Definition of Crowdsourcing
Things are changing so rapidly between innovation, social changes, and economic pressure. But while crowdsourcing is evolving there can be only one definitive definition for what exactly is the world of crowdsourcing. And how can this open-source approach to ideas help your business.
3 min read
How to Make Open Innovation Work for You
Open innovation isn’t as simple as posting a question on your company’s Facebook page and hoping for the best. Instead, it takes careful consideration to devise an open innovation approach that works for your company. This guide will help you strategize so you can get the results you’re looking for.
4 min read
newsletter
Get exclusive access to the latest crowdsourcing insights, inspiration and challenges from HeroX
Do you have an idea for an article or story?
Contact Us
HeroX was a fantastic partner, providing not only a user-friendly online platform but also outstanding expertise and guidance in designing and executing our inaugural Echovation Challenge.

- Robin Wiegerink, CEO of the American Society of Echocardiography.
about herox
community
support
HeroX © 2021
Thank You!
Your feedback is always welcome!