When it comes to renewable energy, wind power is considered one of the most promising contenders. But as with all technologies that offer clean energy and a reduced environmental impact, there are a few stumbling blocks that have stood in the way of full-scale adoption. In the case of wind power, one of the chief concerns is that wind turbines generate too much noise, which can be disruptive to local wildlife and communities.

Luckily, stumbling blocks have a way of leading to creative and innovative solutions. And this is certainly true when it comes to the Liam F1 Urban Wind Turbine, a shell-shaped miniature turbine. Recently unveiled by The Archimedes, a Dutch company specializing in wind energy, the F1 is also compact enough that it can be mounted in any urban environment, providing noise-free and carbon-neutral electricity for homes and small buildings.

In addition, the F1 UWT is much more efficient than conventional wind turbines of comparable size. This has been another problem with wind farms, which have historically been inefficient due to positioning or the intermittent nature of wind speed and direction. To address this, the F1's shell was modelled after the spiral of a Nautilus shell, which allows the turbine to position itself automatically at the best angle to receive the power of the wind. 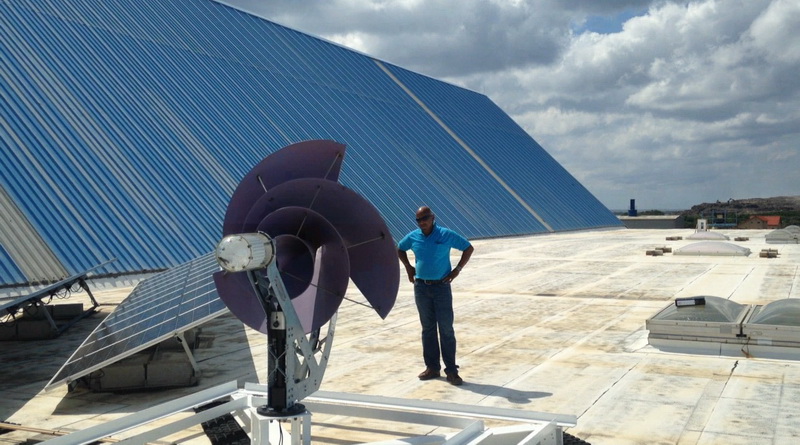 The F1 UTW offers wind power that is noise-free and compact enough to be fitting into any urban environment. Credit: dearchimedes.com

With a wind speed of about 5m/s, the turbine is reportedly capable of generating 1,500 kilowatt-hours of energy, which accounts for roughly half of what a regular household usually consumes. As Richard Ruijtenbeek - an engineer from The Archimedes - explained, the company envisions a future where these turbines, combined with solar panels, can allow homes and business to be self-sufficient in terms of energy.

"When there is wind you use the energy produced by the wind turbine, when the sun is shining you use the solar cells to produce the energy," he said. For people wanting to reduce their carbon footprint, and for homes and communities living "off-the-grid", such an invention is certainly a blessing. Rather than running diesel generators, which are noisy and cause pollution, multiple turbines can be paired with solar panels to ensure that power is provided locally, cleanly, and reliably.

The company recently launched a miniature version of the F1 UWT as well, known as the Liam F1 Mini. Measuring 0.75 meters (2.46 feet) across and weighing 32 kg (70 pounds), the mini generates approximately 1/4 of the yield of a Liam F1 (approx. 375 kWh). In addition, the company recently unveiled their "Butterly Pole" concept in the municipality of Westvoorne in southern Holland.

Consisting of a mast pole that stands 8 meters (26.25 feet) above the ground, the butterfly sports 20 solar panels on its sides and a central turbine. One of these poles is capable of generating 575 KW of power, and with two of them now standing in the local town square, it now has enough power to remain off-the-grid indefinitely. Given time, one can see how such a device could be a boon for remote or off-the-grid communities all over the world.

Even more encouraging is that this is merely one of several examples of design firms offering alternative energy solutions for urban environments in recent years. For instance, last year, the French company New Wind introduced their L'Arbre a Vent ("Wind Tree") for commercial use. This small "urban wind tree" uses a series of 72 vertical-axis micro-turbines (known as Aeroleafs) to generate power from gentler winds, thus being very useful in urban environments.

And then there is the Vortex Bladeless turbine, a vertical wind tube that does not rely on blades to generate electricity. Designed by the Spanich compan Vortex, these funnel-shaped turbines are small enough to be mounted anywhere and can generate up to 100 watts of power per unit. What's more, they address another major concern regard wind power, which is the danger large blades can pose to birds and other wildlife.

With every passing year, the list of possible applications and improvements for wind farms grows. Little wonder then why the Department of Energy - in their 2015 Report titled "Wind Vision: A New Era for Wind Power in the United States" - predicted that by 2050, the industry could support over 600,000 jobs and account for as much as 35% of electrical production in the United States. The future, it seems, will be powered by renewables!

Would you like to see a novel idea that could make alternative energy cheaper and more accessible? Then head on over to the Launch A Challenge page and be prepared to make it happen!

more like this
ENERGY, ENVIRONMENT & RESOURCES TECHNOLOGY
comments
most popular
Healthcare
How to Poop In Outer Space
Non-Profit & Social Impact
All Charities Should (Ultimately) Self-Destruct
Healthcare
NASA Launches the Space Poop Challenge
Government
Embrace the Chaos: Designing for an Antifragile Future
New Partnership Boosts Crowd-Powered Fact Checking Challenge
Hear about new challenges first by signing up to our newsletter
The Fundamentals of Innovation: How new invention ideas become reality
Why is understanding innovation important? Although companies are implementing many new invention ideas, most organizations are having trouble keepin…
9 min read
Non-Profit & Social Impact
A Prize Competition Building the Future of Work: How Do You Rapidly Upskill US workers?
New Profit Unveils Top 15 Ideas For an Equitable Economy. The $6 million Future of Work Grand Challenge is powered by New Profit, JFF, XPRIZE, and MIT Solve
1 min read
5 Examples of Companies That Got Open Innovation Challenges Right
While a company might think it already has the best talent available, much innovation occurs outside the usual venues. In campuses, garages, and small offices worldwide, independent innovators find ways to apply modern technologies to age-old problems.
6 min read