An End to HIV?: A Nanoparticle Cream that Blocks Infection

HIV/AIDS is one of the most infectious and lethal diseases in modern history, second only to cancer in terms the annual number of deaths worldwide that are attributed to it. Since its discovery, almost 78 million people have been infected with the disease and about 39 million people have died of it. Most of the infected live in the developing world, where a lack of infrastructure and social mores limit access to treatment.

Nevertheless, there is reason to hope that this disease will someday join polio, tetanus, TB, smallpox bubonic plague, and other terrible diseases that were once thought to be incurable. According to UNAIDS – the Joint United Nations Programme on HIV/AIDS which is dedicated to destroying the disease by 2030 – the medical community has learned much in the past few years and stands a good chance of accomplishing this goal.

Much of this newfound optimism is due to discoveries have been made in recent years that have been shown to block the transmission of the disease - and in some cases, eliminate it. For example, in January of 2014, a group of researchers from the University of Texas - in collaboration with Humberto Lara Villegas, a specialist in nanoparticles and virology from the University of Monterrey, Mexico (UDEM) - created a vaginal cream that prevents HIV infections. 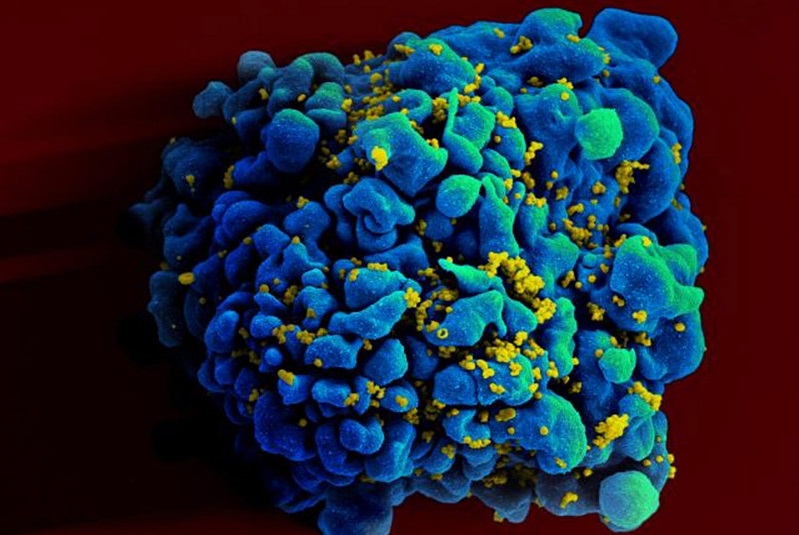 In clinical trials, silver nanoparticles have been shown to block the transmission of HIV. Credit: Investigación y Desarrollo

The key to this miracle cream is silver nanoparticles, which the researchers discovered are capable of blocking the entry of HIV into uninfected cells. According to Lara Villegas, HIV makes its entry to immune cells (CD4) with the aid of a protein known as GP120 that allows it to adhere to cell walls. Silver nanoparticles function in much the same way, attaching themselves to these proteins cells, thus making the virus inactive.

And while the research is still in progress, no toxicity or side effects have been reported where silver nanoparticles come into play. Villegas also indicated that once applied, the cream starts to work in less than a minute and offers effective protection for up to 72 hours. Even better, the fact that they cause the virus to become inactive also means that a vaginal cream employing them will also protect the user's sexual partner.

"Normally, the medication used against the virus act within the cell to avoid its replication," said Villegas. "This is a very different case, given that the nanoparticle goes directly against the HIV and no longer allows its entry to the cell."

Villegas added that this cream could prevent the the transmission of other sexually acquired viruses like the Human Papilloma Virus (HPV) and bacteria that are transmitted in the same way. Currently, the researchers are conducting tests in mice that accept human cells, with the intent of performing clinical trials on humans before long. However, initial tests on human tissue samples showed positive returns.

In addition, a multidisciplinary team of scientists from UCLA and Stanford University announced in July of 2014 that they had used a naturally occurring nanoparticle (called a vault) to create a novel drug delivery system that could lead to new treatments for cancer and HIV. The research team was led by Dr. Leonard Rome, the associate director of UCLA’s California NanoSystems Institute, and Dr. Jerome Zack, the co-director of the UCLA AIDS Institute - both of whom are also members of UCLA’s Jonsson Comprehensive Cancer Center.

Originally discovered by Rome and then-postdoctoral student Nancy Kedersha in 1980, vaults are a naturally occurring nanoparticle made up of proteins that number in the thousands inside each of our cells.Over the years, Rome and his colleagues discovered how to create vaults in the laboratory that were empty at their core, so to pursue the idea of loading them up with drug molecules that they could inject directly into specific cells.

In the case of cancer, this would allow for treatments that could side-step all of the well known side-effects of chemo drugs. In the case of HIV/AIDS, it means that drugs like bryostatin 1 - which activates latent HIV and makes it vulernable to conventional antri-retroviral drugs, but also has toxic side-effects - could be safely delivered spefically to HIV cells.

In the case of HIV, this is a major boon for researchers. As it stands, current anti-retroviral therapies are limited in that they only target the active HIV virus, leaving a reservoir of inactive HIV behind. Once a patient discontinues drug therapy, this inactive HIV can become active and cause them to regress. Rather than simply keeping HIV at manageable levels, which is what current therapies do, a treatment involving vaults could eliminate it completely.

And then there was the announcement that was made by the Washington University School of Medicine in St. Louis in 2013. Here, a team of researchers were able to successfully block the transmission of HIV using gold nanoparticles that contained melittin. This discovery, they believe, could lead to a vaginal gel that would be entirely safe and, when combined with a spermicide gel, could lead to the first all-in-one safe-sex cream.

The key to this discovery, which was made by Samuel A. Wickline and his team at the Washington University, involves what is known as cytolyic melittin peptides. Melittin is found naturally in bee venom, and it has the fortuitous trait of being able to degrade the protective envelope that surrounds HIV. When delivered in both large and free concentrations, they observed that HIV was unable to withstand the assault and died.

Moreover, these melittin-loaded nanoparticles left the surrounding cells unharmed, which incidentally was no accident. The nanoparticles Wickline and his team developed were endowed with a kind of filter that prevents healthy cells from coming into contact with the toxin. But HIV, since its a viral strain, is small enough to slip right through these filters, thus exposing it to the toxin. 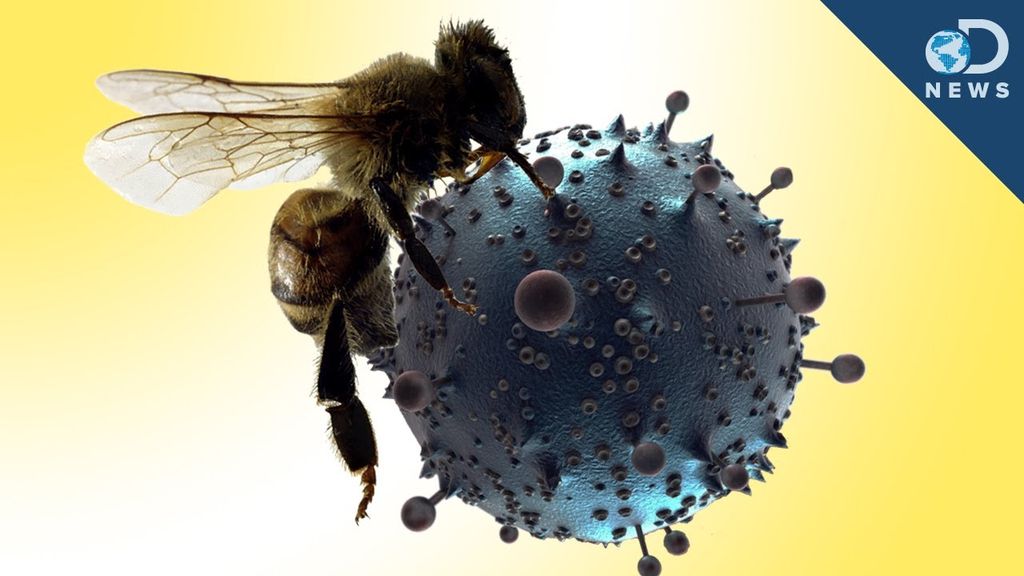 Contained in a gold nanoparticle matrix, melittin was able to block the transmission of HIV. Credit: DNews

"The basic particle that we are using in these experiments was developed many years ago as an artificial blood product," Joshua L. Hood, MD, PhD, said in a university press statement, "It didn’t work very well for delivering oxygen, but it circulates safely in the body and gives us a nice platform that we can adapt to fight different kinds of infections."

Currently, all known forms of HIV treatment involve preventing the virus from replicating to the point that it will morph into AIDS. By contrast, this melittin-gold nanoparticle treatment targets the virus where it lives, focusing on killing it rather than limiting its ability to reproduce. Adding to the general sense of excitement the announcement caused was speculation that this same treatment could be used to combat other infectious STDs, including hepatitis B and C.

At the closing ceremony of the AIDS 2014 conference last year in Melbourne, Australia, many of the speakers told of how utterly terrifying the disease seemed 30 years ago. And while that fear is not gone, it has since diminished, replaced by and large with a sense of hope for the future. Thanks to ongoing research that is producing improvements in diagnostic medicine and targeted therapies using nanoparticles, HIV may very well be eradicated in the coming decades.

Yet another terrible disease that will be piled on the assheap of history! For more information on how you can help make a difference in medical research, check out the Clinical Trial Innovation Prize, which is still open to submissions and will remain so until May 6th.

New Partnership Boosts Crowd-Powered Fact Checking Challenge
join 82678 innovators
Get exclusive access to the latest crowdsourcing insights, inspiration and challenges from HeroX
Non-Profit & Social Impact
lululemon announces the Healthier Community Challenge on HeroX
What if you could experience an environment that improved your well-being just by spending time in it? What would this look like to you? lululemon is…
1 min read
HeroX Tips: Your Crowdsourcing Timeline
Why is the challenge timeline important in crowdsourcing, when is it best to launch a challenge, what are the milestones that determine how long the project should run. All that and more tips and tricks that will help you launch a great crowdsourcing project or challenge, read inside.
1 min read
Government
Crowdsourcing for Smart Cities
Innovation challenges are finding their place in healthcare, data science, renewable energy and more! You’ve likely heard of smart homes and other ‘s…
1 min read
newsletter
Get exclusive access to the latest crowdsourcing insights, inspiration and challenges from HeroX
Do you have an idea for an article or story?
Contact Us
We've successfully collaborated winning and fulfilling on NASA contracts through their Center of Excellence for Collaborative Innovation. HeroX is positioned as the social network for innovation and therefore has a broader and more uncredentialed crowd, which pairs well with our Topcoder crowd of experts in development and design. Their team is great to work with, we've had the pleasure of hosting webinars and other joint initiatives.