explore
launch challenge
how it works
COVID-19
search
sign in
Be the first to know
when new crowdsourcing projects are posted
Energy, Environment & Resources

In 2013, the NOAA reported that CO2 concentrations in the upper atmosphere had reached 400 ppm. What's worse, NASA reports that they could get as high as 800 ppm by 2100, which would result in an average temperature increase of 4.5 °C (8 °F). This change would make like intenable for many regions of the planet, triggering a series of draughts, floods, shortages and humanitarian crises the likes of which the world has never seen.

As a result, there are many who think that lessening our dependence on fossil fuels and coal - mainly by switching over to sustainable, renewable sources of energy - is simply not enough to avoid this worst-case scenario. In addition to producing less in the way of carbon emissions, we also need to start actively removing the carbon we are currently producing from the atmosphere.

One such person is Professor Klaus Lackner, the Ewing and J. Lamar Worzel Professor of Geophysics in the Department of Earth and Environmental Engineering and the director of the Lenfest Center for Sustainable Energy at the Earth Institute of Columbia University. For the past few years, he and Alan Wright - the senior staff associate at the Lenfest Center - have been working on the development of a carbon capture technology that operates much the same as trees do, only better!

Whereas trees rely on photosynthesis to remove CO2 from the air and produce oxygen, their invention pulls carbon dioxide from the air using bits of whitish-beige plastic that look like artificial leaves. These leaves consists of a resin that is similar to the kind that is used to pull calcium out of water in water softener. This resin is then coated with sodium carbonate, a compound that reacts with carbon to create sodium bicarbonate (aka. baking soda).

The technology is not unlike that employed by submarines and space shuttles, where "CO2 scrubbers" turn human exhalations into recycled, breathable air. However, such devices do not come cheap, mainly because it takes quite a bit of energy to seperate the CO2 from the scrubbers once they have pulled it from the air.

That is where the real genius of Lackney's invention comes into play. In addition to being able to soak up CO2 very quickly, all that is needed to seperate it from the resinous material is water. In a series of demonstrations, Lackner and Wright have used a vacuum chamber (shown below) to show how their leaves can absorb CO2 and then release some or all of it, simply by being washed clean. This, they claim, is there cost-effective answer to the problems of air pollution and climate change. 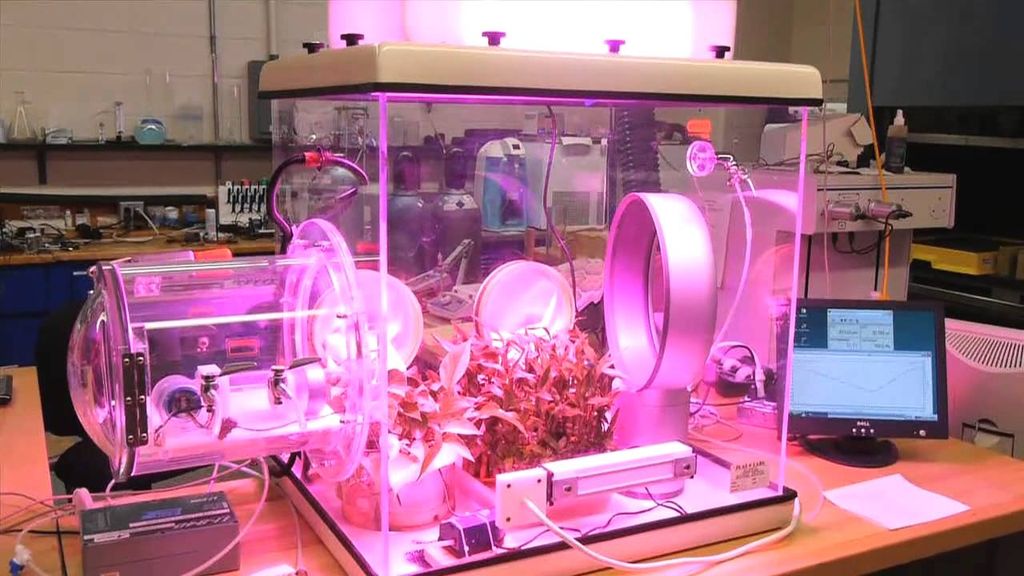 Contained within a vacuum chamber, the captured carbon is removed using only water. Credit: Youtube/Columbia News

“We need ways of getting the carbon dioxide, which is emitted by the combustion of fossil fuels, back,” he said. “In the long term, we need to collect so much carbon dioxide to solve the climate change problem, and the greenhouses are a step on the way. Our goal is to use this to demonstrate you can really capture carbon dioxide and that you can do it at an affordable level.”

According to Lackner. a single tree outfitted with an array of artificial leaves would be roughly the same size and production cost of a car. More importantly, it would be able to collect about 900 kg (2000 lbs, or one Ton) of carbon from the air a day - the equivalent of the greenhouse gases produced by 36 motor vehicles in a day. Ten million of these artificial trees, he estimates, would sop up 12 percent of the CO2 that humans add to the atmosphere each year.

The question then is, what to do with all that carbon once it is retrieved? One option is to compress it down and pump it underground - a process similar to what coal-fired power plants are considering using their own form carbon capture technology. In this process, carbon is removed from coal plant emissions by scrubbers located in the smoke stacks, which is then condensed and stored for later use. 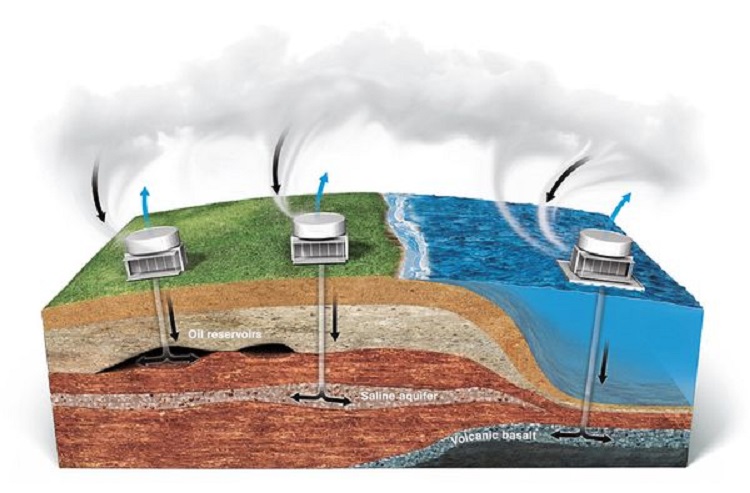 Another would be to use this CO2 for a process known as enhanced oil recovery (EOR), where it is pumped into old oil wells as a solvent to scour lingering hard-to-get oil from the ground. EOR currently boosts US oil output by 10 percent a year, and the US government estimates that state-of-the-art EOR with carbon dioxide could add 89 billion barrels of oil to the nation’s recoverable oil resources - which is more than four times the country’s existing reserves.

Another option is to add hydrogen to the CO2 and convert it into liquid hydrocarbons, essentially turning air pollution into a source of biofuel for vehicles that would burn clean. This latter option is especially attractive because it offers the possibility of a smoother transition between our current state of fossil fuel dependence and our eventual adoption of cleaner methods.

Instead of eliminating cars, airplanes, tankers, gas stations, and an entire energy infrastructure that is dependent on oil and gas, we could simply convert it all to run on hydrocarbon fuels. This has the added bonus of give humanity many more years with which to make the switch over to electric cars, planes, and renewable energy sources. In short, we could save the environment without making any huge changes to our lifestyles.

As always, necessity is the mother of invention, and there are few things more necessary than survival. There is no indication when Lackney and Wrights work might yield a working tree-prototype or when large-scale production might be possible. But given the potential and ease with which it functions, and the benefits it entails, it would be most surprising if artificial trees didn't start popping up very soon in major cities all over the world.

And be sure to check out this video from the Lenfest Center showing Lackner's concept in action:

more like this
ENERGY, ENVIRONMENT & RESOURCES TECHNOLOGY
comments
most popular
Healthcare
How to Poop In Outer Space
Non-Profit & Social Impact
All Charities Should (Ultimately) Self-Destruct
Healthcare
NASA Launches the Space Poop Challenge
Government
Embrace the Chaos: Designing for an Antifragile Future
New Partnership Boosts Crowd-Powered Fact Checking Challenge
Hear about new challenges first by signing up to our newsletter
The HeroX Spotlight Series: Introducing Alex Allakhverdiyev
HeroX is an amazing group of humans who believe in making the world a better place through innovation and crowdsourcing. Our culture and core values are top priority and each and every HeroXer embodies them. This blog series aims to introduce the world to these amazing humans!
1 min read
5 Key Insights from COP26
The 2021 United Nations Climate Change Conference, or COP26, took place between 31 October and 12 November 2021. The purpose of this highly anticipated, and also highly debated, conference was to facilitate the world’s leaders in creating a shared strategy for protecting our planet’s environment.
2 min read
Energy, Environment & Resources
Monitoring Electrical Cable Challenge: The Future of Underground Inspection by Duquesne Light Company
DLC is excited to announce that their crowdsourcing competition, Monitoring Electrical Cable Challenge is officially open and accepting submissions! Innovative minds from across the world are invited to participate in this new and challenging project.
1 min read