There are many concepts for using wind as a source of clean, renewable energy. But on a merchant vessel? That's definitely a novel idea! And yet, this is very the principle behind the Vindskip (Windship), a hybrid vessel unveiled in 2012 by Lade AS - an Ålesund, Norway-based design firm - that uses a specially-designed hull to harness the power of wind and dramatically cut fuel costs and emissions.

Basically, the entire ship acts as a single sail that harnesses wind energy to generate propulsion, and idea that was apparently inspired by the Aerospace industry. Looking to create something that could harness a force akin to aerodynamic lift, the company came up with a symmetrical airfoil that would generate momentum by pulling a ship along, and therefore reduce the amount of force needed to propel it forward.

According to company manager Terje Lade, the symmetrical airfoil ensures that "lift" is generated when the wind comes from both port and starboard sides. "You can compare a symmetrical airfoil with a 'normal' sail," he said in a recent interview with Gizmag. However, compared to normal sailing ships, the Vindskip has an estimated cargo capacity of 6500 ceu (car-equivalent units) and would allow ships to achieve speeds of up to 17 knots for a period of 70 days.

This capacity and performance is not only comparable to existing merchant vessels, but comes with a fuel savings of about 60 percent. But just as important is the drop in carbon emissions, which Lade AS claims would be reduced by as much as 80 percent. Similarly, they claim that system would reduce harmful nitrogen oxide emissions by 90 percent and eliminate sulphur oxide emissions entirely.

Such reductions are an important part of international efforts to curb emissions in the hopes of stabilizing climate change. According to a 2008 report from the International Maritime Organization (IMO), the annual carbon dioxide emissions generated by the world’s merchant fleets have already reached 1.12 billion tonnes of CO².

This accounts for nearly 4.5% of all global emissions of carbon dioxide, and is about three times higher than previously believed. This increase has been attributed to the growth in world trade in recent decades, which is only expected to continue into the future. An updated IMO report, which was filed in 2013, indicates that if emissions from shipping continue to grow as projected, then they would constitute between 12% and 18% of the total CO2 emissions in 2050.

In short, significant changes need to be implemented if we wish to avoid the worst prospects of climate change. These include keeping them at a point where temperatures will only increase by an average of 2°C by 2100 while simultaneously returning carbon emissions to their pre-industrial levels. 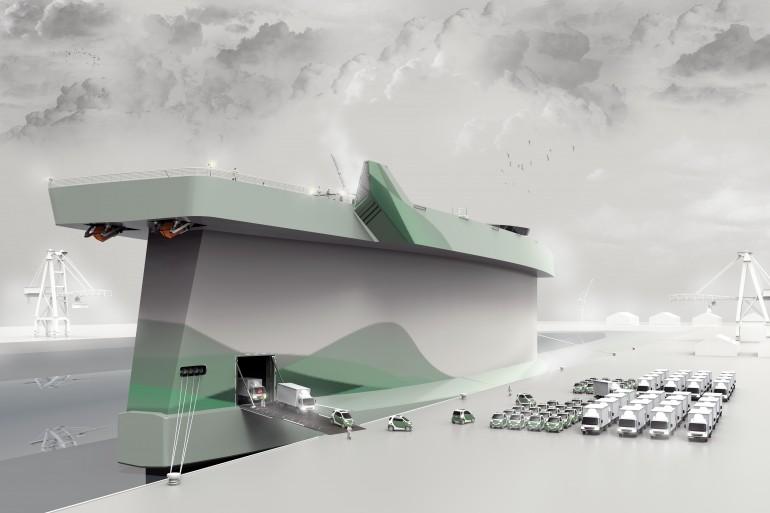 Artist's concept of the Vindskip unloading vehicles to give a sense of scale. Credit: Lade AS

However, as already noted, wind-power only accounts for part of the Vindskip's propulsion. The ship would also use a liquefied natural gas (LNG) system to power the ship up from a resting position until it gathered enough speed for it to exploit the aerodynamic lift its hull would generate.

Designed by Rolls-Royce, the LNG-powered system is apparently very efficient, produces far less greenhouse gases, and little to no harmful emissions that are problematic with today's conventional marine engines - such as nitrogen and sulphur oxide.

While the concept is still in the design phase, it is certainly considered viable by the international community. Already, the design has received several international patents, and the company suggests that the computerized navigation system they have in mind will be capable of running a number of complex algorithms from GPS and weather satellites, thus allowing Vindskip captains to plot the most fuel-efficient shipping courses.

Interestingly enough, the Vindskip represents only one of several ideas that have emerged in recent years from the field of Wind-Assisted Ship Propulsion (WASP). In 2013, the EU's Scalable and Adaptive Internet Solutions (SAIL) created a 3.4-million euro fund to bankroll a project that sought to bring together transport specialists, port officials, academics, consultants and sailors to get the ball rolling a new series of large-scale, technologically sophisticated, wind-powered ships - otherwise known as "ecoliners".

And not surprisingly, wind is not the only source of alternative and renewable energy to be making its way into the world of merchant shipping. In the past few years, there have also been numerous design concepts brought forward that seek to adapt solar energy as well.

These include Nissan’s solar-diesel hybrid car-hauler, the first Japanese vessel to employ 281 deck-mounted solar panels alongside an electrically-controlled diesel engine to curb emissions. According to Nissan’s calculations, the prototype hybrid vessel - named the Nichioh Maru - will use 1400 tons less fuel and put out 4200 fewer tons of carbon dioxide per year compared to the same class of ships.

And then there's the Auriga Leader, a hybrid-solar vessel that Toyota unveiled back in 2009. Outfitted with 328 solar panels, the ship has been able to draw up to 40 kW of renewable power from the Sun, rather than its on-board diesel generator. While this is only a small amount compared of the ship’s total energy needs, Toyota has seen the potential and has gone ahead with the developed a solar panel that is three-times as efficient.

Taken together, these developments can be seen as merely one part of a larger trend where all modes of transport - be they automobiles, trains, planes, or maritime vessels - increasingly rely on renewable energy sources to curb their emissions and lessen our dependence on fossil fuels.

Want to help make a difference in the fight against pollution? Then check out the Fuel Freedom Fuelx Challenge, or the TEN9 Challenge for a chance at a major cash prize!

more like this
ENERGY, ENVIRONMENT & RESOURCES TECHNOLOGY
comments
most popular

New Partnership Boosts Crowd-Powered Fact Checking Challenge
join 79069 innovators
Get exclusive access to the latest crowdsourcing insights, inspiration and challenges from HeroX
Non-Profit & Social Impact
lululemon announces the Healthier Community Challenge on HeroX
What if you could experience an environment that improved your well-being just by spending time in it? What would this look like to you? lululemon is…
1 min read
HeroX Tips: Your Crowdsourcing Timeline
Why is the challenge timeline important in crowdsourcing, when is it best to launch a challenge, what are the milestones that determine how long the project should run. All that and more tips and tricks that will help you launch a great crowdsourcing project or challenge, read inside.
1 min read
Government
Crowdsourcing for Smart Cities
Innovation challenges are finding their place in healthcare, data science, renewable energy and more! You’ve likely heard of smart homes and other ‘s…
1 min read
newsletter
Get exclusive access to the latest crowdsourcing insights, inspiration and challenges from HeroX
Do you have an idea for an article or story?
Contact Us
HeroX was a fantastic partner, providing not only a user-friendly online platform but also outstanding expertise and guidance in designing and executing our inaugural Echovation Challenge.