The Fifth Mode of Transportation: The Hyperloop High-Speed Train

Back in 2012, Tesla Motors and SpaceX founder Elon Musk made news when he announced his idea for a "fifth form of transportation", one that would supplement the existing methods of travel by boat, rail, plane and automobile. Known as the Hyperloop, the concept called for the creation of a high-speed train that would use a low-pressure steel tube and a series of aluminum pod cars to whisk passengers back and forth between San Francisco and LA.

A year later, he released an alpha paper describing the concept in detail. In it, Musk claimed that the pods would be supported by a soft air cushion and propelled forward via magnetic induction and electromagnetic pulses, thus avoiding the issues of air resistance and friction. As a result, this transit system would theoretically be able to achieve supersonic speeds of up to 1280 km/h (800 mph), and make the trip from San Fransisco to LA in just 35 minutes.

Musk explained that he had conceived of the idea after hearing about the sad state of California's $70 billion high-speed rail initiative. In Musk's view, what was needed in Silicon Valley, and anywhere else in the world for that matter, was a mass-transit system that could not only outperform other means of transportation, but also cost less per mile without major subsidies. 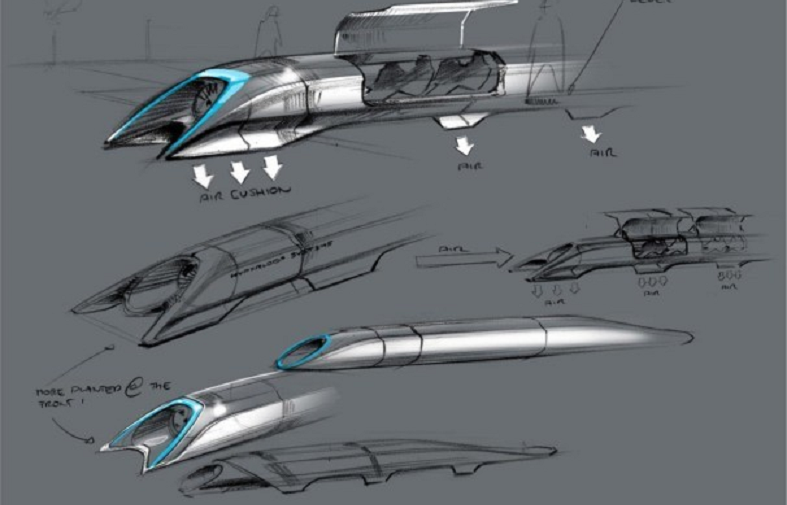 However, Musk also indicated at the time that he was too busy to build such a system, but that others were free to take a crack at it. And it seems that a small startup from El Segundo, California is prepared to do just that. That company is JumpStartFund, a startup that combines elements of crowdfunding and crowd-sourcing to make innovation happen.

Dirk Ahlborn, the CEO of JumpStartFund, believes they can build Musk’s vision of a solar-powered transit system that could transporting up to 7.4 million people from LA and San Francisco on a regular basis. Together with SpaceX, JumpStartFund has created a subsidiary called Hyperloop Transportation Technologies (HTT) to oversee all the necessary requirements for creating the system (interesting fact: HeroX Co-Founder Peter Diamandis just happens to be on their Board of Directors).

This included bringing together 100 engineers from all over the country who work for such giants of industry as Boeing, NASA, Yahoo!, Airbus, SpaceX, and Salesforce. Last December, these engineers came together for the first time to get the ball rolling, and what they came up with a 76-page report (entitled “Crowdstorm”) that spelled out exactly how they planned to proceed. By their own estimates, they believe they can complete the Hyperloop in just 10 years, and at a cost of $16 billion. 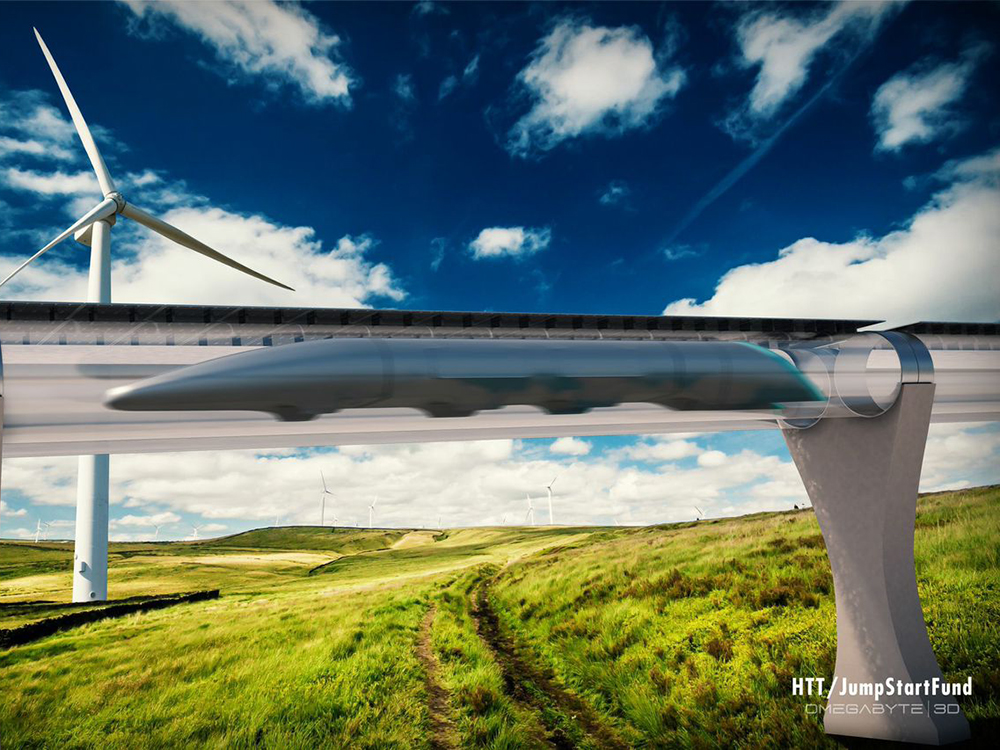 Concept art of what a completed Hyperloop would look like amidst the countryside. Credit: HTT/JumpStartFund

That price tag is higher than what Musk quoted - which he estimated to be between 6 and 10, depending on whether it transported only people or people and cars. In addition, the completion time of a decade is at the outer edge of Musk's original estimate, which was that a demo could be built within 3 to 4 years, and that it would take 7 to 10 years for someone to build a full system running from Los Angeles to San Francisco.

However, Ahlborn is undeterred and believes that all obstacles, financial or otherwise, can be overcome. As he professed in an interview with Wired in December of last year: “I have almost no doubt that once we are finished, once we know how we are going to build and it makes economical sense, that we will get the funds.”

The HTT report also covered the basic design and engineering principles that would go into the building of the train, as Musk originally proposed it. Basically, this consists of pods cars that provide their own electricity through solar power, and which are accelerated through a combination of linear induction motors and low air pressure. 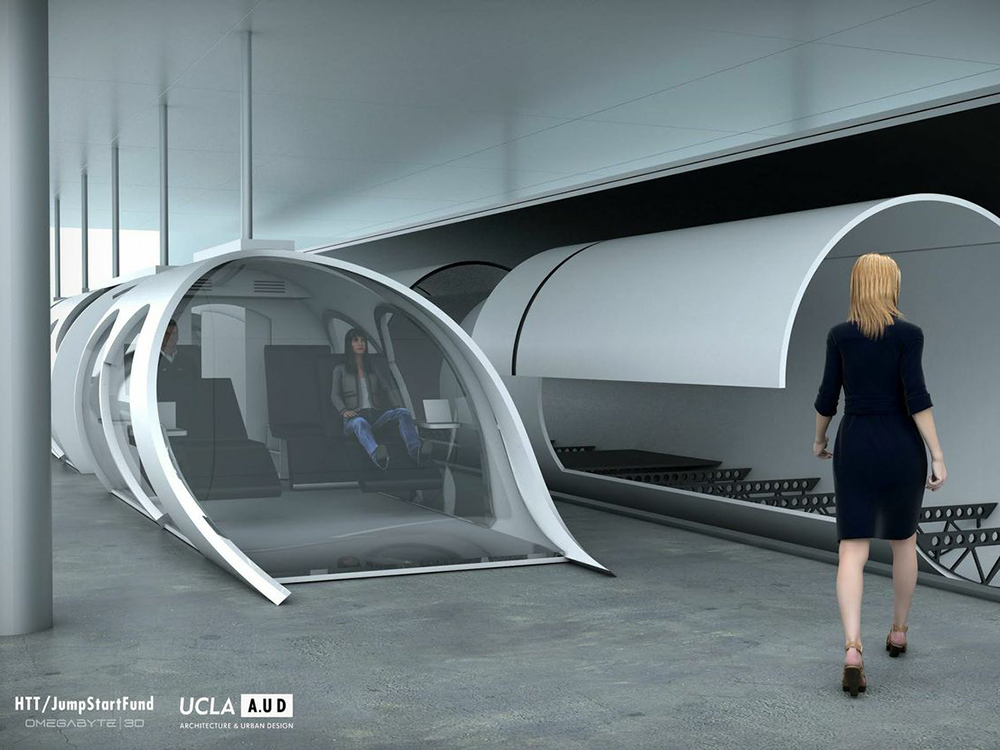 Concept art showing different “classes” for travel, which would include business class for those who can afford it. Credit: HTT/JumpStartFund

Linear electric motors would also be placed at each destination to slow the pods down by absorbing their kinetic energy, which would then be put back into battery packs and used to accelerate the next pods, or stored for future use. Solar panels on top of the tubes would also provide energy. Much has been made of the tube-aspect of the idea, and has often led to comparisons being made to the kinds of pneumatic tubes that were used to send messages around office buildings in the mid-20th century. But of course, what is called for with the Hyperloop is bit more sophisticated.

However, the HTT engineers indicated that such a system need not be limited to California. As it says in the report: “While it would of course be fantastic to have a Hyperloop between LA and SF as originally proposed, those aren’t the only two cities in the US and all over the world that would seriously benefit from the Hyperloop. Beyond the dramatic increase in speed and decrease in pollution, one of the key advantages the Hyperloop offers over existing designs for high-speed rail is the cost of construction and operations.”

The report also indicated the kind of price bracket they would be hoping to achieve. As it stands, HTT’s goal is “to keep the ticket price between LA and SF in the $20-$30 range,” with double that amount for return tickets. But with an overall price tag of $16 billion, the report also makes allowances for going higher: “[Our] current projected cost is closer to $16 billion,” they claim, “implying a need for a higher ticket price, unless the loop transports significantly more than 7.4 million annually, or the timeline for repayment is extended.” 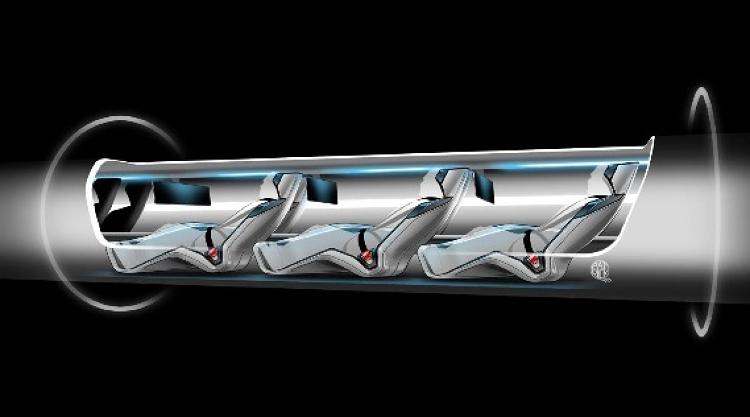 Artist's concept of the transport pods used in the Hyperloop. Credit: Tesla Motors

The report also indicated that they are still relying heavily on Musk’s alpha document for much of their cost assessments. As a result, they can’t be specific on pricing or what kinds of revenues the Hyperloop can be expected to generate once its up and running.

And of course, there’s still plenty of logistical issues that need to be worked out, not to mention the hurdles of zoning, local politics and environmental assessments. Basically, HTT can look forward to countless challenges before they even begin to break ground. And since they are depending on crowdfunding to raise the necessary funds, it is not even certain whether or not they will be able to meet the burden of paying for it.

However, both Ahlborn and the HTT engineering team remain optimistic. Ahlborn believes the financial hurdles will be overcome, and if there was one thing that came through in the team’s report, it was the belief that something like the Hyperloop needs to happen in the near future. As the  team wrote in the opening section of “Crowdstorm”: 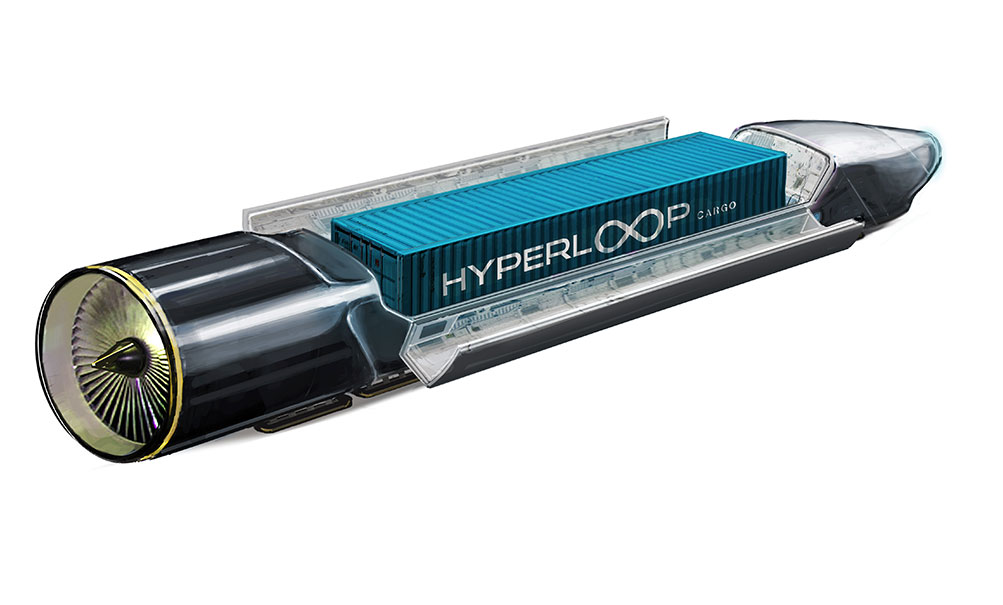 Artist concept of what the cargo pod cars will look like. Credit: Hyperloop

“It quickly becomes apparent just how dramatically the Hyperloop could change transportation, road congestion and minimize the carbon footprint globally. Even without naming any specific cities, it’s apparent that the Hyperloop would greatly increase the range of options available to those who want to continue working where they do, but don’t wish to live in the same city, or who want to live further away without an unrealistic commute time; solving some of the major housing issues some metropolitan areas are struggling with.”

And it seems that the US government may be getting on-board. Back in September, the team behind Hyperloop Technologies managed to secure $8.5 million worth of seed funding from Congres, with plans for a $80 million round of funding to come later this year. The credit for this goes to former SpaceX engineer Brogan BamBrogan - along with venture capitalist Shervin Pishevar and former White House deputy chief of staff Jim Messina - who presented the concept to then-Senate Majority Leader Harry Reid.

But of course, the Hyperloop is still very much in its planning and development phase, and nothing is certain about its future. However, when it was first proposed by Musk, it was clear that what it really needed was someone who believed in it, the necessary expertise, and enough money to get it off the ground. As of now, it has the first two, and is working its way towards accumulating the third.

Sources:
more like this
TECHNOLOGY
comments
most popular
Healthcare
How to Poop In Outer Space
Non-Profit & Social Impact
All Charities Should (Ultimately) Self-Destruct
Healthcare
NASA Launches the Space Poop Challenge
Government
Embrace the Chaos: Designing for an Antifragile Future
New Partnership Boosts Crowd-Powered Fact Checking Challenge
Hear about new challenges first by signing up to our newsletter
The HeroX Spotlight Series: Introducing Alex Allakhverdiyev
HeroX is an amazing group of humans who believe in making the world a better place through innovation and crowdsourcing. Our culture and core values are top priority and each and every HeroXer embodies them. This blog series aims to introduce the world to these amazing humans!
1 min read
5 Key Insights from COP26
The 2021 United Nations Climate Change Conference, or COP26, took place between 31 October and 12 November 2021. The purpose of this highly anticipated, and also highly debated, conference was to facilitate the world’s leaders in creating a shared strategy for protecting our planet’s environment.
2 min read
Energy, Environment & Resources
Monitoring Electrical Cable Challenge: The Future of Underground Inspection by Duquesne Light Company
DLC is excited to announce that their crowdsourcing competition, Monitoring Electrical Cable Challenge is officially open and accepting submissions! Innovative minds from across the world are invited to participate in this new and challenging project.
1 min read