Robots in the Kitchen: Cooki the Robot Chef

Between Roombots that do our vacuuming, robotic personal assistants, and telepresence robots, there seems to be no limit to the applications robots can have in our houses and offices. As a proposed feature of "smart homes", robotic helpers that can do everything from cleaning and acting as personal assistants appear to be the way of the future.

But what about cooking? While appliances like the Nest thermostat and smart fridges are certainly taking the guess work out of climate control and keeping food fresh, making meals for yourself and family members remains a human-centered task. And for people who don't have the time to cook, precooked, frozen meals and ordering out appear to be the only alternatives.

Luckily, there are those who are looking to bring automation and robot helpers to the kitchen. One such company is Sereneti Kitchen, the start-up responsible for the creation of Cooki, the automated cooking robot. After launching their product at Tech Crunch, the company presented the Cooki prototype at this year's Consumer Electronics Show, where they gained quite a bit of buzz. 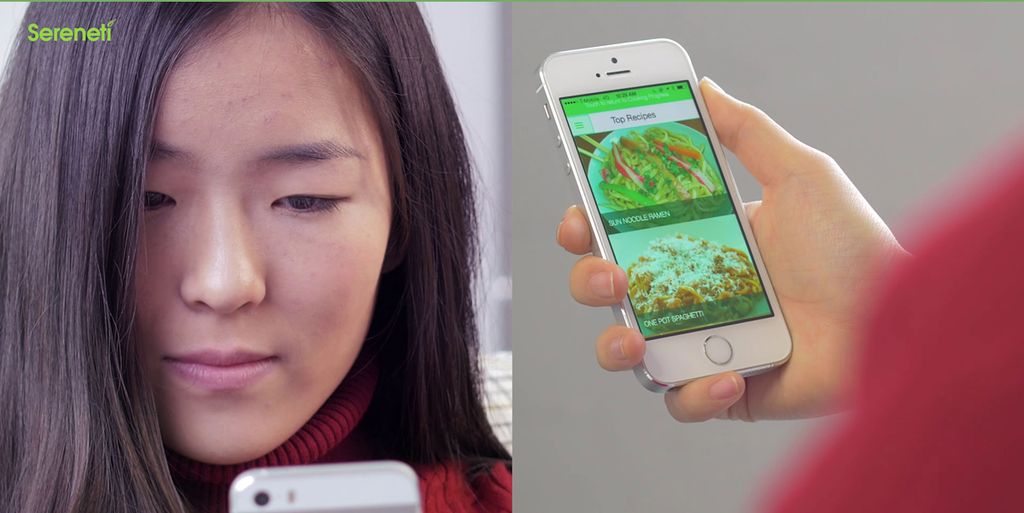 Using prepared ingredients, a proprietary app, and a programmable robot, the process is quite straightforward. It begins with Sereneti delivering plastic trays of fresh, precut, premeasured ingredients, based on “chef-inspired” recipes the owner selects from the company’s app. The owner then tells Cooki what recipe they want it to make and when they want to eat, load the trays, and lets Cooki do the rest.

At the moment, the robot's culinary skills are apparently limited to things like stir fries and pastas, owing to the fact that it basically dumps ingredients into a heated pot and stirs them. At the same time, the advertised price tag of $600 seems a bit prohibitive for today's regular consumer. However, as Haidee Chen - one of Sereneti's cofounders - told a panel at CES, the purpose behind Cooki goes far beyond saving time in the kitchen.

“By preportioning just the right amount of healthy, fresh ingredients and reducing the amount of work required to prepare these meals, we not only help people save time—we also help conserve food and encourage healthier eating habits." But beyond making adjustments to the way we live, Chen and her twin sister Helen invented the concept as a way of bringing the all-too-common feature of automation into the one place it seemed to be lacking. 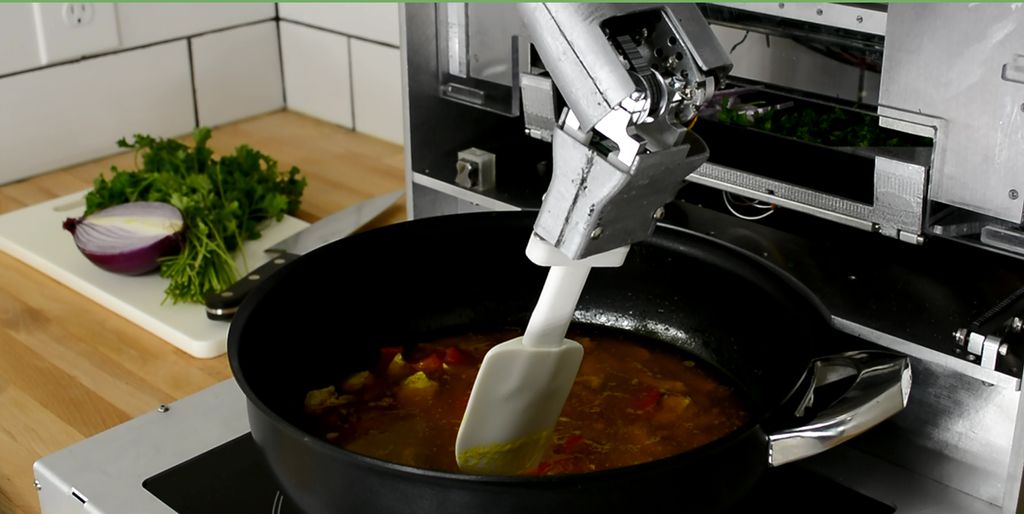 As part of the "Millenial" generation, Chen is accustomed to a world where everything is just a push of a button away. As she expained to the Tech Crunch panel while she and her team made their demonstration: "Do you remember life without the ease of pushing buttons? I don't. I'm only eighteen, and almost everything in my life revolves around pushing buttons... So why can't we cook by pushing a button? The closest thing we have are microwave meals, and those don't taste so good."

In short, Chen sees the robot that she and her colleagues are working towards as a sort of "Keurig for cooking" - a means of preparing meals using the modern, convenience-based approach that can create something that is both more appetizing and healthier than your standard microwave entree or take-out food. And Cooki was by no means the only robotic kitchen helper turning heads at Tech Crunch of this year's CES.

In addition, there was the PicoBrew Zymatic, which is claimed to be the world's first fully automatic "all-grain beer brewing appliance." About the size of microwave oven, this devices brews dozens of different kinds of fresh beer at the touch of a button. There was also the Rotimatic machine which, as the name suggest, take fresh ingredients and turns them into hot roti flatbreads.

Also, there was the Home To Nature automated seed sprouter, a device which automatically controls humidity and temperature for optimal sprouting so that people can have their own fresh-sprouted grains and veggies in the kitchen. The device also offers the option for mixing seeds to create foods of different tastes and nutritional balances.

And last, but certainly not least, was the Bonaverde - the world's first roast-grind-brew machine. An all-in-one appliance that was clearly designed to make standard coffee machines obsolete, this devices not only roasts raw coffee beans, but also grinds and brews them to create the freshest cup of coffee anyone couild enjoy outside of a plantation.

Naturally, there are those who would decry such efforts by saying that introducing automation into the kitchen is the wrong way to bring about healthier living and eating. Making smarter choices about the food we eat, in essence, requires us to take an active role in the preparation of our own food, rather than simply trusting in someone other than a restaurant or frozen meal maker to do it for us.

However, to this, one can argue that automation in the home is also about rethinking the way we eat and feed ourselves based on shifting realities in the world's food supply. With populations growing at an alarming rate and expected to reach between 9 and 10 billion by mid-century - coupled with increased drough, crop failure and ecological impact brought on by climate change - there are many who think that adjusting our expectations of food is the only solution. 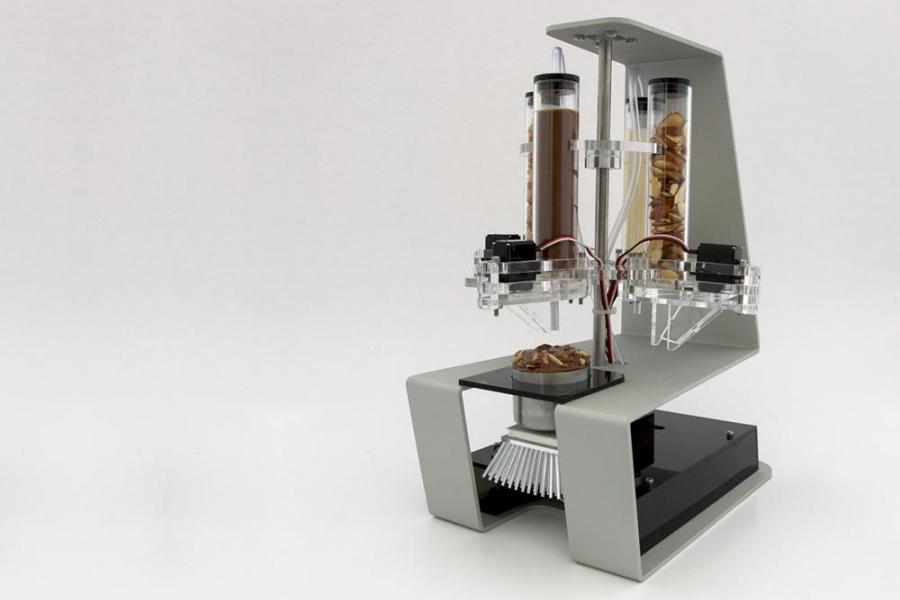 For example, the ingredients that are delivered by companies like Serenti in the future need not be the same vegetables, starches or proteins that can be easily bought at a supermarket. Instead, they could rely on alternative sources, such as sustainable sea algae, chick peas, tofu beans, or processed insect proteins to deliver all the nutrition we need.

The robot's skill could then come through in the presentation factor: preparing these perfectly safe - if somewhat unappetizing - ingredients into healthy and attractive-looking entrees. It might all sound a bit farfetched and a tad like science-fiction, but between smart homes and the 3D food printers that are also making headway, there is a growing market for this kind of technology.

To raise the necessary $100,000 they need to bring the Cooki to market, Sereneti also launched an crowdfunding campaign this past January. However, due to suggestions and feedback they recieved at this year's CES, they have temporarily suspended the campaign in order to adapt proposed improvements into a new design. The campaign is expected to relaunch in a few months. For those interested in their progress, or looking to make a donation, consult Sereneti's Indiegogo page for further updates.

And while we're waiting for robots to handle all our daily chores, be sure to check out Sereneti Kitchens' campaign video:

And this video of Sereneti making their Tech Crunch demonstration:

more like this
FINANCES TECHNOLOGY
comments
most popular
Healthcare
How to Poop In Outer Space
Non-Profit & Social Impact
All Charities Should (Ultimately) Self-Destruct
Healthcare
NASA Launches the Space Poop Challenge
Government
Embrace the Chaos: Designing for an Antifragile Future
New Partnership Boosts Crowd-Powered Fact Checking Challenge
Hear about new challenges first by signing up to our newsletter
Government
Safety Standards for Personal Protective Equipment
PPE is critical for the safety of workers in many fields and industries, but what are the standards for adequate protective clothing, how are they developed, and how they are used?
3 min read
Energy, Environment & Resources
How other industries are utilizing the Circular Economy and questions we should ask about the agricultural industry
The issues of waste and resource depletion are apparent across industries. This is why we’re seeing more and more companies adopt a Circular Economy. What value is the model bringing to the companies that have adopted it? Can any lessons be transferred to the agricultural industry?
2 min read
Energy, Environment & Resources
Current trends in modern agricultural practice
To bring about sustainable change, we need to adopt circular methods. This is why we’re seeing many circular trends emerging in the agriculture sector from vertical farming to lab-grown meat! Let’s dive further into the revolutionary technology that’s paving the way for new possibilities.
2 min read