Upcoming webinar: Innovate More Effectively by Crowdsourcing Ideas Inside & Outside of Your Organization - Jan. 26, 2021, 1 p.m. PST

When it comes to the future of manufacturing, self-assembly is the order of the day. Even with the advent of 3-D printing, fashioning objects, buildings and tools can be a time-consuming and tedious process. But if it were one-day possible to create components and materials that could assemble themselves and adjust their configurations based on external conditions, it would not only save us all a ton of time and money, it would also revolutionize the way we live.

In recent years, developments have been made that seeks to generate SA materials using 3-D printing. In this context, they are what is known as 4-D materials – a process where customizable materials are created using a 3-D printer, but which are capable of folding and adjusting their shape at a certain point in time.

The latest in this trend comes from MIT, where researchers at the Self-Assembly Lab have collaborated with Autodesk and Stratasys - two leading companies in the field of 3-D printing hardware and software - to create materials that are not only capable of folding themselves, but also stretching and bending in response to external stimuli. 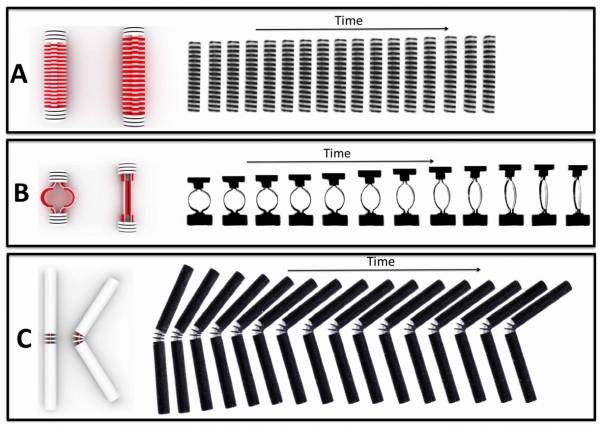 In a paper which was recently published in Scientific Reports, they describe how such a material could be used to create self-evolving structures that vary over time due to interaction with their environment. Dan Raviv, a postdoc at the MIT Media Laboratory and the lead author on the paper, said the following:

“If a structure is going to change, and curvature appears — like going from a flat domain to something that has effective curvature, such as a mountain — the area is going to change. There’s going to be stretching. Until now, people just considered bending, which leaves the area and lengths the same. Or they did some stretching, but without the ability to control or pre-program it. Now we need to develop new sets of tools to do both.”

Development of the process began last year when Skylar Tibbits - a research scientist in MIT's Department of Architecture who heads the MIT Self-Assembly Lab - invited Raviv and other members of the Media Lab’s Camera Culture group to collaborate on the problem of self-assembly. Their experience interpreting visual data through geometric analysis was seen as essential, since mapping out 3-D models is very similar to mapping out points of color in an image.

The Camera Culture researchers were responsible for developing algorithms to determine how much components of a 3-D object would need to stretch in order to successfully change into another shape. Meanwhile, Tibbit’s group was tasked with figuring out how to make materials that could accomplish this physically. 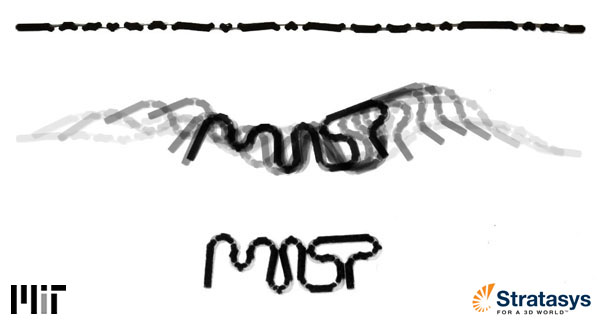 Along with his team, Tibbits came up with a simple but elegant design for a “linear actuator” - a component that enables segments of printed materials to stretch. In the component, two polymer disks are connected to each other by two bowed strips of a composite polymer. The inner edges of the bowed strips are made from the expanding polymer, and when they absorb water, the strips straighten out.

After much experimentation to get the parameters just right, they created a self-folding strand that was capable of going from a rigid position to spelling the initials MIT (see image at top and above). This is not the first time that such materials have been created, as the self-folding cube (see video below) will attest. Tibbits was also the one responsible for coining the term 4-D printing, where the fourth dimension is the time it takes the object to assemble.

Similarly, experiments conducted by the University of Colorado, Bolder last year have garnered the attention of SA enthusiasts. Here, Prof. H. Jerry Qi and Martin L. Dunn - of the Singapore University of Technology and Design - created a series of shape-memory polymer fibers that were combined with composite materials as they were being printed. 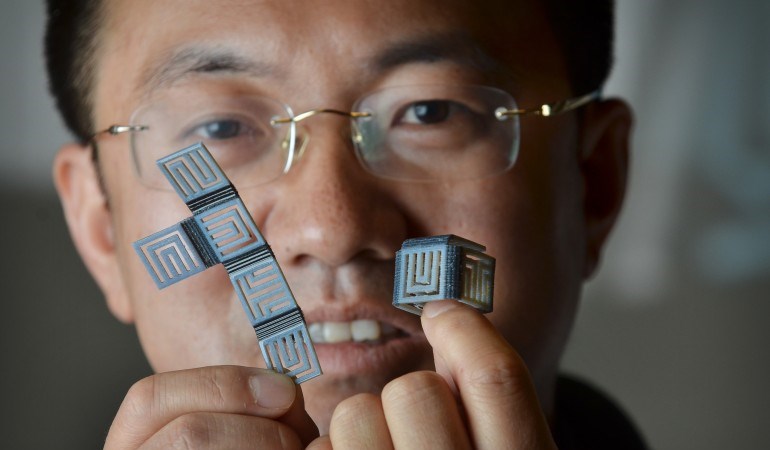 By carefully controlling the location and orientation of the fibers, they were able to print off items (like the folding blocks pictured with Prof. Qi below) that can fold, stretch, curl or twist in a predictable fashion when exposed to a stimulus such as water, heat or mechanical pressure.

A fascinating field of research, especially when you consider that the inspiration behind it is biological in nature. As the fundamental component of all life, protein molecules are composed of poylpeptide strands of nucleic acids that fold into specific configurations to form the building blocks of different tissues, which in turn perform different functions.

By combining that concept with the world of robotics and manufactured products, researchers are seeking to create structures and objects that are capable of assembling and reassembling on command. In addition, research into programmable biological structures that can adjust and carry out various functions under different types of stimulation is also proceeding apace. In this respect, the building blocks are organic, but the purpose remains the same.

At this rate, we could be embarking upon a future where buildings are composed entirely of components that assemble themselves to form tenements, skyscrapers or houses, and then reorient themselves when they need to to deal with rain, snow, or high winds. The multi-tool could also live up to its name -  a single object made up of adjustable robotic bits that change configurations to form different tools on command.

And, looking far ahead, organic technology could eventually be pioneered that would turn all buildings and objects in our world into living, breathing tings, capable of responding to the needs and habits of their users/inhabitants. Dare we dream?

And be sure to see the following videos from MIT and TEDx that deal with 4-D Printing and SA materials:

New Partnership Boosts Crowd-Powered Fact Checking Challenge
join 86584 innovators
Get exclusive access to the latest crowdsourcing insights, inspiration and challenges from HeroX
Technology
5 Steps for Creative Crowdsourced Problem Solving
The 5 steps of problem-solving are a great framework to use in tackling challenges on the heroX platform. And although the structure helps teams of innovators get started on a challenge, we must always remember that complex problem solving is not a linear process, it is an iterative process.
4 min read
Technology
A Roundup of Cool 2021 Innovation Conferences
2020 was a year that brought some truly inspiring innovation conferences, especially since the pandemic forced innovation for all the event organizers who had to pivot their events online. We rounded up the best of the best that have been announced so far for 2021.
4 min read
Technology
When The Answer Isn’t Inside | How To Import New Ideas Into Your Team Without Hiring More People
Both Ideawake & HeroX aim to provide an open innovation platform to tap into subject matter experts and other innovative thinkers who think and work outside organizational lines. Ready to jumpstart their partnership, with HeroX providing the public outlet for diverse and innovative perspectives.
2 min read
newsletter
Get exclusive access to the latest crowdsourcing insights, inspiration and challenges from HeroX
Do you have an idea for an article or story?
Contact Us
We've successfully collaborated winning and fulfilling on NASA contracts through their Center of Excellence for Collaborative Innovation. HeroX is positioned as the social network for innovation and therefore has a broader and more uncredentialed crowd, which pairs well with our Topcoder crowd of experts in development and design. Their team is great to work with, we've had the pleasure of hosting webinars and other joint initiatives.