The Promise of Solar Power

Solar Power has come a long way in recent years. Once considered to be the most promising amongst energy alternatives, it has now reached a point where it has become economically viable and even competitive. In fact, a recent report from the International Energy Agency states that photovoltaics and solar thermal systems could generate 27% percent of all electricity by 2050, which would make solar energy the single largest source of power by mid-century.

Much of the motivation behind this has had to do with Climate Change. With temperatures predicted to increase by 2 °C to 6 °C by 2100, switching to renewable energy is not only wise, it's absolutely necessary.

At the other end, however, there is the ongoing process of innovation which is making solar cells cheaper and more effective. In addition to the dropping costs associated with construction and installation - two major stumbling blocks in the past - new ideas are leading to improvements in solar cell efficiency, which has historically been a significant problem.

Known as the Shockley-Queisser efficiency limit, this theory posits that the ultimate conversion efficiency can never exceed 34 percent for a single optimized semiconductor junction. Multijunction cells that use several different materials to capture a larger section of the sun’s spectrum can achieve more, but are typically very expensive, which would defeat the purpose.

However, innovations have been made in the past few years that are boosting solar cell efficiency beyond this limitation, thus speeding the switch to renewable resources and promising a future of plentiful clean energy. 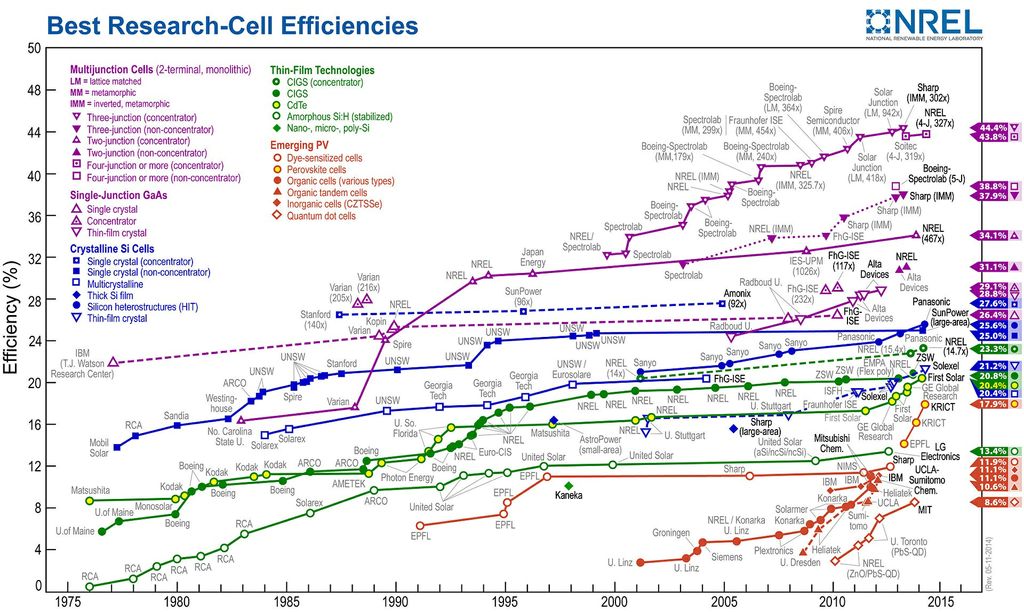 For example, a research team at the University of Cambridge has come up with a revolutionary new technique to create hybrid solar cells made from organic and inorganic semiconductor materials, leading to a significant increase in efficiency. In this case, the organic material is pentacene, a material naturally present in green leaves. Compared to silicon, which releases a single electron for every photon absorbed, pentacene can release two.

However, these electrons are not free and are difficult to pin down, since they are bound up within ‘dark’ triplet exciton states. But by using state-of-the-art femtosecond laser spectroscopy techniques, the team discovered that triplet excitons could be transferred directly into inorganic semiconductors, with a transfer efficiency of more than 95%.

Similarly, last year at MIT, researchers incoporated pentacene into a PV cell and relied on a process known as "singlet exciton fission" to absorb the free electrons. What this works out to is an effective doubling of solar cell efficiency, and the possibility of speedier adoption by energy concerns and consumers.

And then there's the work being done to ensure that solar cells can absorb more in the way of the light spectrum. As it stands, conventional PV cells can only absorb visible light, leaving non-visible wavelengths like Infrared (i.e. heat) as wasted energy.

Hence why researchers are working on incorporating thermal emitters into PV cells to absorb both photons and heat. Unfortunately, these emitters have been plagued by an efficiency problem of their own. This is because the delicate 3D nanostructures of thermal emitters has been unable to hold up to temperatures in excess of 1000 °C (1800 °F), which has limited them to an efficiency increase of about 8% - which simply isn't cost-effective.

Stanford professor Shanhui Fan and Paul Braun at University of Illinois were able to sidestep this problem by creating a new type of thermal emitter out of tungsten coated in a nanolayer of hafnium dioxide - a ceramic which added significant structural durability at high temperatures. In addition to making thermal emitters more heat-resistant - and hence worth the cost of adding them to PV cells - these two materials are themselves cheap and plentiful, which presents solar power companies and developers with a win-win situation.

Not to be outdone, a team working at the University of Utah announced this past summer that they had developed a technique that could allow solar cells to absorb more wavelength of light, thus significantly boosting their total energy output.

Basically, they devised a polychromat layer for use on multijunction cells that separates incoming light and redirects it to strike particular subtrates layers. The test device used two substrates - a indium gallium phosphide layer for visible light and a gallium arsenide layer for infrared light.

Of course, that increase is a percentage of a percentage (rather than percentage points) which means that it can achieve a maximum boost of just over 20% for multijunction cells. However, this is still an impressive feat which could make multijunction cells more cost-effective, and the researchers claim that the polychromat layer can be stamped out as cheaply and easily as DVDs.

In addition, some amazing work is being done with nanowires and nanostructures, both of which have shown great promise in making solar cells more efficient. This past March, researchers at the University of Michigan, Ann Arbor, were able to use a coating of metal nanostructures in order to boost the efficiency of extremely thin silicon cells. 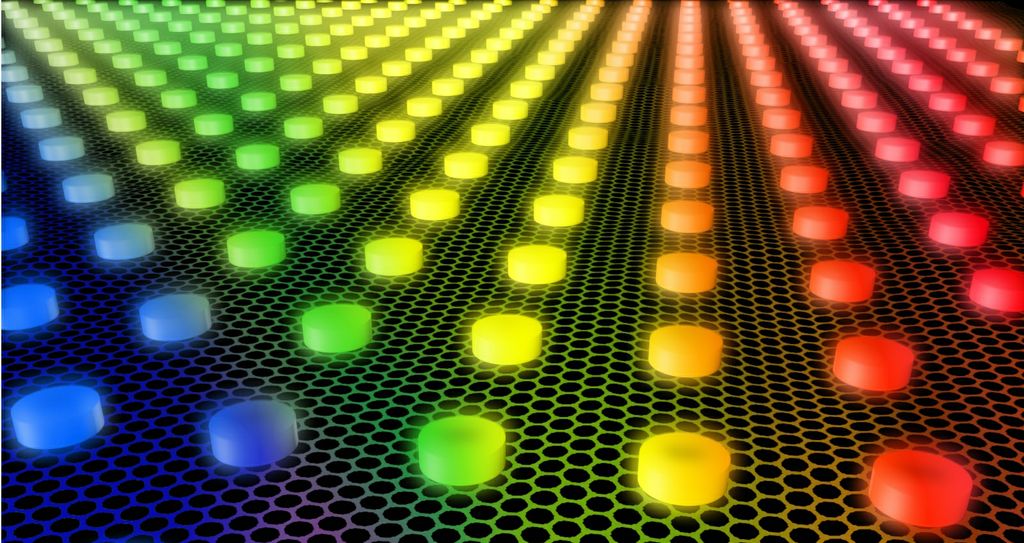 Typically, solar cells need to be thick in order to absorb more light and convert it to electrical energy. But thin cells are more desirable from a cost standpoint, as they are significantly less expensive to produce. By relying on metal nanostructures ability to absorb the light waves known as plasmons, The UofM team were able to demonstrate that thin cells could be made more productive.

They began by building a 12 μm-thick solar cell out of silicon and added four layers of metal nanostructures. These they produced using a process called block copolymer lithography - an inexpensive method of producing large areas of layered uniform metal nanostructures on thin silicon solar cells. They then coasted these with silver and gold layers and heated the entire mix before adding layers of glass.

The finished product was about 100 μm thick and, when exposed to a light source, was able to absorb 98% of the light hitting it. Granted, it was only able to convert 10.7% of this into energy, but that represents a significant increase from thin silicon cells that are uncoated. What's more, it demonstrated that plasmonic nanostructures could help improve the performance of thin-film cells.

Moving back to MIT, last Spring a research team showed how zinc oxide nanowires could boost the efficiency of quantum dot PV cells. Quantum dots are essentially nano-sized crystals of a semiconducting material that both produce and are sensitive to light, and have been considered a cheap alternative for some time.

The one problem with them is that they lack the same efficiency as conventional PV cells. But by incorporated the nanowire structures, the MIT researchers were able to boost the current produced by 50%, and the overall efficiency to 5%. The lead researcher claims they intend to get that as high as 10% - which is considered the barrier for commercial adoption - in short order.

At around the same time, researchers at the Niels Bohr Institute in Denmark and EPFL in Switzerland announced that they had built solar cells entirely out of single nanowires. Using thin gallium-arsenide (GaAs) nanowires, a silicon substrate, and transpent indium tin oxide, they created a solar cell that reportedly has an energy denisty four and a half times that of a conventional PV cell.

Taken together, all of these innovations are likely to add up to a future where solar power will be both economically viable and environmentally smart. According to the same report filed by the IEA, an aggressive move to energy efficiency and renewables could be the difference between a temperature increase of 6 °C by 2100 and 2°.

This latter figure is specifically being targeted by international agreements because it is what scientists say would be a relatively safe outcome. An increase of 6 ° however, will make life untenable for much of the planet. In other words, switching to renewables may very well be the difference between life and death.