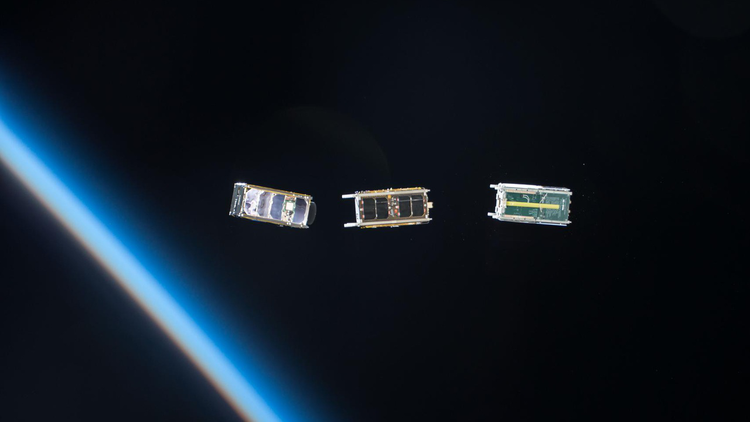 CubeSats are gaining popularity among academia, industry, and government. CubeSats are miniature satellites that are commonly used in low Earth orbit, have been used for educational purposes, and recently for applications such as remote sensing, scientific experimentation, or communications.  As engineers become more familiar with the technology, CubeSats are also being considered for flights outside of Earth orbit — to locations such as the Moon, Mars, or Jupiter.  Read more about Cubesats here.

The CubeSat standard was first proposed in the late 1990s by two professors: Dr. Jordi Puig-Suari of California Polytechnic State University and Dr. Bob Twiggs of Stanford University. They were trying to help students gain engineering experience with satellites, which are traditionally expensive to build, launch, and operate.

These small satellites cost significantly less to build, launch, and operate than traditional satellites.  The lower cost allows for more rapid integration of new technology and experimentation with new concepts. The small size and weight reduce launch cost and allow the CubeSat to share a rocket with a larger satellite.  CubeSats adhere to a set of standards that are based on “Safety of Flight” concepts that will “Do no harm” to primary payloads, which is why they are allowed to fly with the more expensive payloads on a “space available” basis.

To give you an example of the use of such small, yet powerful technologies, the Earth observation company Planet recently launched around 100 3U CubeSats from a single rocket to build a constellation capable of imaging the entire earth every day to support everything from disaster response to climate monitoring.

Why Issue a Challenge?

Here’s where you come into play.

USSOCOM is unique in that it has service-like acquisition capabilities.  USSOCOM relies on private industry to develop SOF-peculiar equipment and technology to meet mission requirements while complying with federal acquisition regulations and federal law.

One of the guiding tenets of SOF is that most special operations require non-SOF assistance.  As such, USSOCOM is seeking global ideas on how to advance CubeSat capabilities. Specifically, USSOCOM is conducting this crowdsourcing challenge to solicit concepts that advance the state of current CubeSat technologies and payloads and demonstrate applications that may benefit any of the USSOCOM missions.  Concepts should be viable for a prototype demonstration within 12-24 months. These concepts will advance how CubeSats can be utilized to support Special Operations Forces (SOF) missions.

What You Can Do Right Now

Entries Resources FAQ
We were able to work with HeroX to draft challenge guidelines, promote the challenge to a targeted audience of interested parties, and ultimately draw a crowd of innovators from across the globe to submit proposals to address our challenge. We were quite satisfied with the number and diversity of both individuals and proposals that the challenge drew.