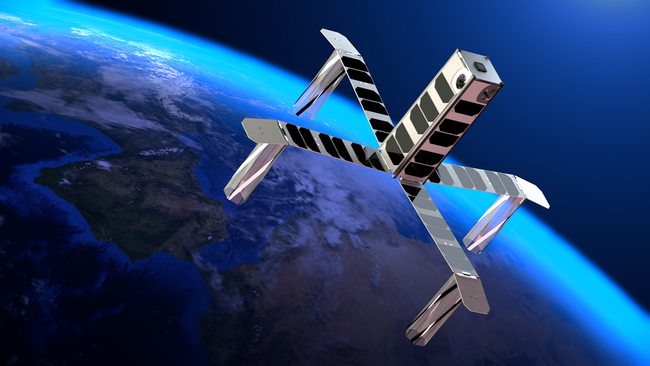 short description
LSAT is a phased array antenna for UHF SATCOM, capable of both direction finding and communication with small, low-power ground terminals.
Bio
Introduce yourself or your team
Hugo Shelley is the founder and lead designer at Iota Technology, an innovation consultancy and hardware development studio in London. He studied Physics and Philosophy at Oxford and completed his postgraduate studies at the University of St Andrews, Scotland. He spends his time helping tech startups make the leap from dreams to reality.

Catalin Edu graduated from Coventry University as an industrial designer and has been designing products for companies all over the world for the past 6 years. His designs include those for the marine (Raymarine), military (FLIR), and scientific equipment industries (Oxford Instruments), in addition to a wide range of consumer electronics. His main interests are IoT and the space industry.

Fereshteh Abbasi is a telecommunications engineer specialising in antenna design. She received her PhD in Electrical and Systems Engineering from the University of Pennsylvania in 2015. Since then she has actively been involved in research and development in the satellite communication industry.

Dani Epstein is a product designer specialising in photorealistic product renders as well as 3D printing and embedded electronics. He has extensive knowledge and practical experience with most commonly used manufacturing processes and has held down more jobs than he cares to recall, giving him an unusually broad work experience and peculiar skill set.
What makes you an ideal candidate for this Challenge?
Our little international team is extremely diverse! We come from a wide variety of backgrounds, both geographically and culturally. We’re united by an enthusiasm for space travel and innovation, and our excitement about the possibilities that cubesats represent for science and technology.

Hugo and Dani have worked on previous competitions together, while Edu and Fereshteh bring new skills to the team that were needed to make this project a reality.

LSAT is a synthesis of RF engineering & mechanical design - with some origami thrown in. Between us we cover all the disciplines necessary to put together this proposal. Given a little more time, we could even build it - we’re just missing a large, liquid-fuelled rocket to put it into orbit. Perhaps you can help …
Solution
Describe your solution.
LSAT is a high-gain, dynamic phased array antenna for UHF SATCOM. It features four hexagonal antennae that fold up into the solar panels as shown in the video demo here: https://youtu.be/UfuUwajlvcU

Each antenna is an open-ended quadrifilar helix, made of copper traces bonded to a single sheet of dielectric film. The sheet is is stiffened with six fibreglass panels and formed into a hexagonal tube. The tubes fold flat into the space at the sides of the satellite and deploy using standard spring hinges.

The antennae feature 20Mhz bandwidth at UHF military uplink frequencies and may be operated at a higher downlink frequency with the use of a duplexer. Our simulation predicts almost 7dB of gain for the array, a fivefold increase in gathering power over a standard UHF tape-spring antenna.

By adjusting the phase of the signal at each antenna, the direction of the main beam may be rapidly changed without physically moving the satellite. This allows us to keep the beam locked on to a mobile or static target as the satellite passes overhead, providing horizon-to-horizon communication to even the smallest ground terminals.

The LSAT system is incredibly versatile. Using standard flex-rigid PCB manufacturing processes it is possible to print and test a new conductive element without modifying either the support structure or the method of deployment. L-band, S-band or higher frequencies are all possible. With only minor modifications it can be mounted on both 3U and 6U cubesats, including the 1.5U payload structure supported by the Prometheus cubesat bus.
What is the size of your proposed solution?
When stowed, each antenna and accompanying solar panel fold up with an overall dimension of 80 x 260 x 4.5mm, within the extra space at the sides of the cubesat allowable by the Cal Poly standard. The antenna itself occupies an estimated volume of only 15 cubic cm in a compressed state, expanding to 30 times this volume when deployed.

The accompanying UHF radio and array driving circuitry should take up no more than 0.5U of payload space and may be positioned anywhere in the body of the cubesat. The central aperture of the satellite remains unobstructed, providing a clear view for other payloads including earth-facing sensors.

The system is not limited to nadir-pointing cubesats (as illustrated) neither is it limited to arrays with only four elements. Solar panels that are hinged along the length of the cubesat provides scope for multiple, shorter hexagonal antennae to be deployed along the length. This is suitable for cubesats with a flight vector parallel to their longest side.
Does your solution help Special Operations Forces missions? How?
There are four main applications of this technology to Special Operations Forces missions:

1. Handheld SATCOM
LSAT’s high-gain antenna can form a stable link with small, handheld radios. The calculations in the attached PDF demonstrate that a robust communication link is possible with a ground terminal EIRP of only 7dBW, well within the capabilities (and safe limits) of a handheld radio.

A small cubesat constellation could operate as a backup in the event that the primary (MUOS) manpack radio fails or for missions that require ultra-lightweight equipment. These radios could also be issued to local (non-military) personnel for support purposes or humanitarian use (disaster recovery etc) providing a channel for communication where there may be no cell service available.

The high gain and beamsteering capability of the LSAT array make it idea for capturing data from unattended ground sensors in remote areas. As the satellite passes overhead, it dynamically changes the direction of the beam to ensure the strongest possible communication link. This minimises the power needed to communicate with the satellite, dramatically improving both the battery life of the sensor and quantity of data that can be collected.

The calculations in the PDF demonstrate that a 25kb/s data link may be achieved even at low satellite elevations. With an average pass time of 180s, it is possible to collect up to 0.5MB of data on a single pass. Under normal use (~30 kilobytes per day), a sensor may last for over 1 year on a single Panasonic 18650 battery. With light usage, many years of continued operation are possible.

The LSAT array may be operated in RDF (radio direction finding) mode. By using a combination of beamforming and Doppler processing techniques it is possible to determine the angle of arrival of UHF transmissions, and therefore their point of origin on the ground. This technique may be used to locate a standard-issue radio or specialised distress beacon.

RDF mode may also be used to locate the source of potential threats including jamming stations, UHF radar, areas of interference, etc. A constellation of cubesats could extend spectrum coverage if needed.
Where known, identify platform accommodation requirements for power.
The radio and driving circuitry will consume an estimated 0.1W in standby and 0.5W in receive. System power during transmission may be anywhere from 4-10W depending on the desired link budget. The average power consumption per orbit will depend on the mode and frequency of use.

LSAT provides scope for solar cells to be positioned on the reverse of the array, compensating for the power required by the radio and increasing the overall power budget for the cubesat.
Where known, identify platform accommodation requirements for thermal control.
LSAT requires no additional thermal control measures beyond those required for a normal UHF radio. To aid with thermal distribution, the satellite may spin slowly around the z-axis without affecting any of the the primary functions.
Where known, identify platform accommodation requirements for data transfer rate.
LSAT can cover its own telemetry requirements with data rates of up to 250kb/s.
Where known, identify platform accommodation requirements for data transfer volume (per orbit).
Data transfer volume per orbit depends on the mode of use. With over 1MB of data transfer possible per pass, the LSAT system should be able to provide general cubesat telemetry in addition to the requirements of most payloads. If additional data transfer is required, an S-band patch antenna may occupy the central (earth-facing) aperture of the satellite.
Where known, identify platform accommodation requirements for bus stability and attitude control.
After launch the cubesat must be successfully detumbled and oriented so that the z-axis points towards the earth. LSAT’s beamsteering abilities allow it to automatically compensate for 5 degrees or more of pointing innaccuracy.
Can you identify any additional platform accommodation requirements for your solution?
To accurately calculate the origin of a UHF signal we must know the orientation of the cubesat and its position relative to the ground. A GPS radio is essential, and star tracker(s) are recommended.
Can your concept can be implemented with current state-of-the-art flight-qualified components, or will it require additional development? Please describe.
It should be possible to adapt an existing flight-qualified radio with the necessary array driving circuitry. The antenna itself may be assembled using standard flex-rigid PCB manufacturing techniques, elevating it to TRL 3 within only a few weeks. All other necessary components including the solar panels, spring hinges and burn wire deployment mechanism may be selected from previously existing components at TRL8+
Intellectual Property: Do you acknowledge that this is only the Concept Phase of the competition, and all ideas are to remain the property and ownership of USSOCOM for future discretionary use, licensing, or inclusion in future challenges?
Yes
Supporting PDF upload
LSAT_presentation.pdf