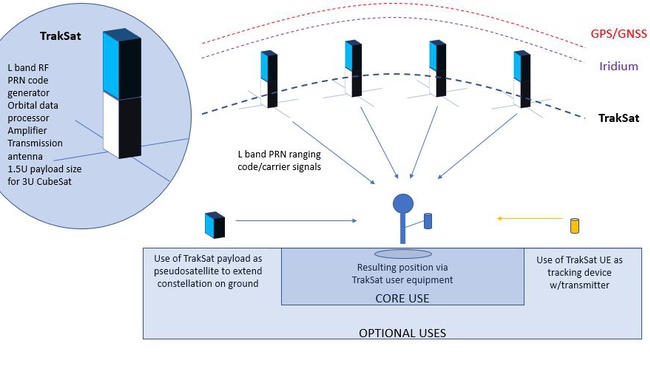 short description
Location-determining service for SOF-controlled independent hyper-local positioning, navigation, and tracking.
Bio
Introduce yourself or your team
J. Kelly
What makes you an ideal candidate for this Challenge?
Principal systems architect/engineer/technology director w/27+ years in military system architecture/development/design including navigation, communications, targeting, and weapon systems.
Solution
Describe your solution.
The TrakSat system utilizes a compact RF transmitter, PRN code generator, timing source, and orbital and signal data frame generator able to fit in a 1.5 CubeSat payload element (for a 1.5U component within a 3U CubeSat). To aid GPS/GNSS or a ground network of PSVs, one TrackSat providing time may be used; however, for minimal positioning, at least 4 TrackSats would be required in orbit regionally. A mission profile could be supported for small operational windows w/ 3-4 TrakSats and (per orbit selection) 6-8 TrakSats for extended windows.

Each TrakSat payload would transmit one signal in available L band (between 1100-1900MHz avoiding existing GPS/GNSS/Iridium bands) w/ a unique PRN code per TrakSat payload or ground PSV. The code & supporting orbital data elements (ephemerides) are encrypted & modulated on the signal to create a low detectibility/high anti-spoof spread spectrum signal at sufficient power for a GPS/GNSS reception-level result via each TrackSat in LEO. The operations can be controlled by SOF for continuous or periodic/event/burst transmit for SOF-only availability & covert use. Orbital data is preloaded (short missions) or updated via existing CubeSat uplink.

The on-space system includes a precision time source, L-band RF oscillator, PRN generator, navigation/ data FPGA/processor, transmission power/amplifier electronics, & supporting helical transmission antenna. Power is minimal w/approximately 10W tapped from the existing CubeSat power bus. The user equipment (UE) system includes a L band antenna, LNA, signal oscillator & amplification, A/D, DSP, and associated processor for performing the PRN code correlation, carrier phase ambiguity determination and ranging, and resultant position determination including ephemeride decoding and use. The UE equipment can be cheaply constructed as a discretely operating device, battery powered, and compact enough to operate as a tracking module when coupled with a transmitting device of opportunity.
What is the size of your proposed solution?
The TrakSat in-space payload components are intended to conform to a 1.5U payload volume and mass (10x10x15cm, ~1.9kg) constraint suitable for use on a 3U CubeSat. The in-space components include
precision time source, L-band RF oscillator, PRN generator, navigation/ephemeride data FPGA/processor, related transmission power/amplifier electronics, and supporting helical transmission antenna.
Does your solution help Special Operations Forces missions? How?
As described, the provision of a SOF-controlled/accessible position determination service independent of any infrastructure elements (US or opportunistic) creates a highly available critical functionality for individual navigation and tracking use while minimizing spoofing or disability of existing services currently utilized. A viable-use constellation can be created with 3-4 rapidly deployed TrakSats, enabling fast response and use. LEO-based positioning enables higher power reception if designed correctly, increasing available signal strength and end use. Rapid LEO Doppler changes in frequency enable quick high precision carrier phase-derived range elements to be used for precision positioning. The simplicity of the design enables cheap UE development for individual use or use as tracking beacons when combined with transmission devices. The option for utilizing a translated approach enables the possibility for existing GPS/GNSS UE to be used to interact, saving fielded equipment funds. The option to deploy the compact TrakSat payload as a ground PSV/positioning source further extends the TrakSat service availability in difficult terrain, improving the overall utility of the service.

USSOCOM has already identified the utility and benefit of specific-to-SOF based assets including discrete tactical data and communications networks. The abilit to deploy locally-focused globally-deployable (from outside of theater) SV-based communications specifically for SOF operations has already been in exploration via USSOCOM’s Prometheus program through the Office of Operationally Responsive Space (OSR) in which eight (8) 1.5U CubeSats with unique-to-SOF data/communication payloads have been launched and used since 2013.

A benefit of CubeSats to Iridium and other commercial services is the ability to select and optimize orbital insertions to maximize (for time and area) coverage of the desired function in a region of interest. An additional benefit is that CubeSats may operate in different LEO orbits, creating the opportunity for improved access (for communciations or navigation signals) using lower power when flying at lower LEO positions. One example is the existing Iridium STL provision that is able to transmit its ranging signal (for positioning) at a 300-2400x higher received power by terrestrial users while using less than ½ the transmission power of GPS.

Given the presence and prior (and current) experimentation by USSOCOM in CubeSats to provide specific-to-SOF imaging and communications possibilities, a valid new suggestion is to incorporate position determination that is GPS/GNSS/Iridium STL/existing infrastructure independent and can be extended to include SOF-specific ground pseudolites/PSVs or beacon elements used to either improve positioning further or to be used as tracking devices on assets of interest. Such a capability can be implemented simply via select frequency RF transmitter and antenna elements, PRN code generator, and pre-mission formulated orbital data and data block elements suitable for limited or (via updates) long term operation. The location-providing capability can have further benefits if translatable to existing user equipment (such as GPS/GNSS receivers), reducing the need for unique equipment to operate the system.
Where known, identify platform accommodation requirements for power.
Power to the system is minimally impacting with an estimate of approximately 10W tapped from the existing CubeSat power bus.
Where known, identify platform accommodation requirements for thermal control.
The proposed TrakSat in-space components can be included within a radiation-hardended payload shell common to the CubeSat payload system, minimizing thermal effects. Additionally, the proposed components are minimial in thermal generation due to effective electronics design and low power. The exposed component (antenna) is inert for thermal requirements.
Where known, identify platform accommodation requirements for data transfer rate.
The proposed design suggests a similar-to GPS/GNSS data transfer rate of approximately 25-50 symbols per second for ephemerides/navigation data transmission. Uplinks for ephemeris updating is via the existing CubeSat medium bandwidth capabilities.
Where known, identify platform accommodation requirements for data transfer volume (per orbit).
See above. The proposed TrakSat payload is transmit-only (in this version), not requiring significant in-space bandwidth or data transfer considerations, only in the reception between each SV and UE.
Where known, identify platform accommodation requirements for bus stability and attitude control.
The proposed TrakSat benefits from attitudinally-aligned (tangent of transmission antenna in orbital pattern to orbital tracking point on ground) SV positioning but is not critical. The emitted TrakSat footprint can radiate fairly broadly due to slight attitude variation given the individualized UE determination of real time ranging to each SV. The bus power is required to remain sufficient to enable a higher-than GPS/GNSS reception level at the ground UE position which is very broad.
Can you identify any additional platform accommodation requirements for your solution?
The proposed TrakSat will require attachment and use of a transmit L band antenna in the ground/Earth facing surface of the CubeSat.
Can your concept can be implemented with current state-of-the-art flight-qualified components, or will it require additional development? Please describe.
The proposed in-space TrakSat components can be found today in suitable (when rad-hard payload shell surrounded) packaging via commercial entities. A most-compact discrete design can be rapidly developed to decrease volume. Sources can be provided by request.
Intellectual Property: Do you acknowledge that this is only the Concept Phase of the competition, and all ideas are to remain the property and ownership of USSOCOM for future discretionary use, licensing, or inclusion in future challenges?
Yes
Supporting PDF upload
USSOCOM_TrakSat_JTK_101717.pdf