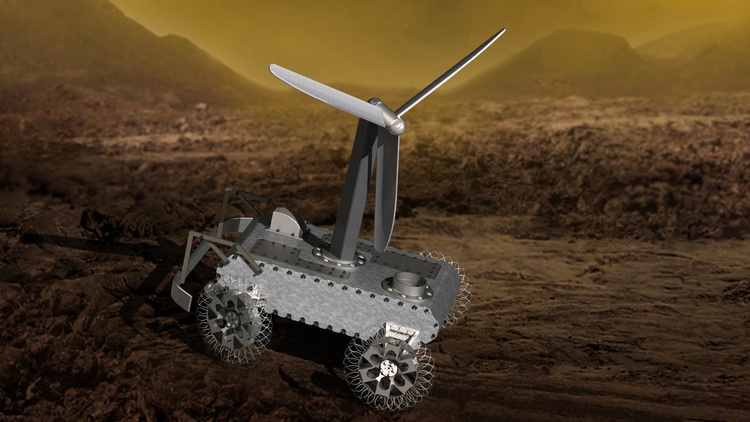 Imagine a world hot enough to turn lead into a puddle, where the atmospheric pressure can crush a nuclear-powered submarine. Now imagine sending a rover to explore that world.

Venus, ancient sister of Earth with a planetary environment just this side of hellish, has been visited by a handful of probes since the early days of space flight.  Of the many missions to our celestial neighbor, only about a dozen have made contact with the surface of the planet. The longest-lived landers only managed to function for a couple of hours before succumbing to the relentlessly oppressive heat and pressure.

Despite the punishing conditions, previous missions to Venus have nevertheless delivered important information, such as:

NASA’s Jet Propulsion Laboratory (JPL), under a grant from the NASA Innovative Advanced Concepts (NIAC) program, is studying a mission concept to return to the surface of Venus, known as the Automaton Rover for Extreme Environments (AREE), something not accomplished since the Soviet Vega 2 landed in 1985.

Current, state-of-the-art, military-grade electronics fail at approximately 125°C, so mission scientists at JPL have taken their design cues from a different source: automatons and clockwork operations. Powered by wind, the AREE mission concept is intended to spend months, not minutes, exploring the landscape of our sister world. Built of advanced alloys, AREE will be able to collect valuable long-term longitudinal scientific data utilizing both indirect and direct sensors.

As the rover explores the surface of Venus, collecting and relaying data to an orbiter overhead, it must also detect obstacles in its path like rocks, crevices, and steep terrain. To assist AREE on its groundbreaking mission concept, JPL needs an equally groundbreaking obstacle avoidance sensor, one that does not rely on vulnerable electronic systems. For that reason, JPL is turning to the global community of innovators and inventors to design this novel avoidance sensor for AREE. JPL is interested in all approaches, regardless of technical maturity.

This sensor will be the primary mechanism by which the potential rover would detect and navigates through dangerous situations during its operational life. By sensing obstacles such as rocks, crevices, and inclines, the rover would then navigate around the obstruction, enabling the rover to continue to explore the surface of Venus and collect more observational data.

JPL has issued this Challenge to the global community because the rover must have the ability to successfully navigate in such a demanding environment in order to qualify for additional developmental funding. While the mission to the surface of Venus may be years off, the development of a suitably robust rover sensor will strengthen the case for returning to Venus with a rover, something that has never been attempted before.

The Exploring Hell Challenge received 572 submissions from people in over 80 countries! The Judging Panel was so thrilled by the number of outstanding and innovative entries that NASA is recognizing an additional 12 solutions!

HeroX and NASA hosted a webinar to recognize the winners and learn more about their winning solutions. You can view the webinar here:

Youssef Ghali is an awarded Egyptian architect and product designer. With a passion for experimenting with engineering solutions, Youssef’s all-time motto and principle is “form follows function” and as a strong believer of practicality and the power of minimalism in inventions he approached this project with a simple yet creative direction that can be summed up in one sentence: “back to basics from a new point of view”

Eric and Martin are two 24-year-old career mechanical engineers living in LA and Santa Barbara, respectively. The two were dorm-mates their freshmen year at UC Santa Barbara, and completed several projects together while attending college, including competing in the SpaceX Hyperloop competition for their senior year capstone project. They both graduated in 2017. Both have a passion for aerospace engineering and love following the amazing projects carried out by NASA.

I undertook this design challenge for two reasons. Firstly, I sometimes feel shortchanged as a mechanically-focused-mechatronics engineer that I wasn’t born in the era of typewriters and automata. The idea of needing clock springs and Stirling engines to solve the world’s problems is an inherently pleasant one to me, as strange as it must sound to normal people. So, seeing this challenge on Scott Manley’s youtube channel naturally made me drop my automatic curtain project and sign up immediately. The second reason I entered was because visiting JPL, seeing the gear, and meeting the people has been an unattainable dream of mine ever since reading “The Martian” six years ago at university. This challenge suddenly made my dream feel slightly more attainable

The judging panel was incredibly impressed by the full-scale prototype developed by KOB ART and awarded an additional, unplanned prize of $2,000 USD to acknowledge their efforts.

KOB ART is a design company located in Riga, Latvia, that specializes in product development, design, and installations as well as in creating special custom-made solutions. Our work is a combination of crafting, technologies, electronics, architecture, and design.

KOB ART is a family business founded by Kristine Berza and Oskars Berzs. We both are dreamers with a technical and artistic background. This project is a challenge for us, a step outside of our comfort zone, but we love to challenge ourselves, to broaden our horizons, use different technologies and find different solutions to make ideas come to life. It is our motto and that is what keeps us going!

The judging panel was incredibly impressed by the use of SONAR and the detailed proposal to support its use and awarded an additional, unplanned prize of $2,000 USD to acknowledge their innovation.

Matthew is a Mechanical Engineer and loves novel engineering challenges. Designing a system to operate on Venus is unlike any challenge he has faced before. Feeling slopes and rocks were simple. Matthew initially tried to design a mechanism to feel for holes, ignoring small ones but anything plausible was heavy & complex.

Matthew decided that a remote hole detector was simpler, and with Venus' thick atmosphere, SONAR became the obvious choice. With difficulty doing anything electrically on Venus, a mechanical SONAR was born.

While we were only able to award five prizes, there were many outstanding entries and NASA would also like to acknowledge the following honorable mentions (in no particular order):

"Cane and Able" by Martin Holmes

"The Double Octopus" by Thomas Schmidt