Imagine a world where everyone has access to clean and affordable energy.

Can you help make this a reality?

In its simplest definition, a tracker is used to reposition solar panels to follow the sun with a certain degree of accuracy. The current method to track the sun is to place solar panels on large, automatically moving frames. However, that may not be the way of the future.

Through this challenge, we are seeking ideas and designs from you about how to reinvent the dual axis tracker frame entirely. Perhaps you propose a new material, a new installation method, or a new approach entirely - we leave that up to you. All you have to do is improve the status quo.

Solar trackers are one of many ways to mount solar panels. Coincidentally, they are also among the most efficient forms of mounting equipment available. Since they “track” the sun’s position in the sky, they’re able to maximize the energy received from the sun throughout the day, rather than being locked into a single position that becomes less efficient as the sun’s angle changes, sacrificing optimal energy production for part of each day.

See Figure 1 for an example of a fixed-tilt set up for solar panels. Here, the module is stationary at this angle at all times. The value of the angle is equal to that of the latitude of the location where the panels are to be used. 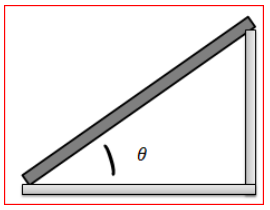 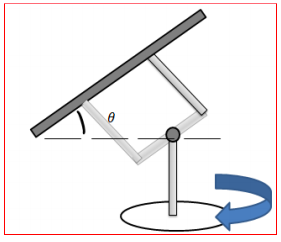 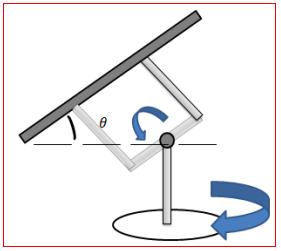 The strength of dual-axis trackers is their ability to maximize energy production. However, this is the status quo. They also have a higher degree of mechanical complexity, making them more expensive and requiring more maintenance over their installed lifetime. As such, single-axis trackers are more commonly used, as the cost of dual-axis trackers is significantly higher than single-axis, while only showing marginal improvement in energy production (3-8% more than single).

Every telescope on the market that can track a planet has improved, the motors have gotten smaller, the price has dropped, and the accuracy has improved. No comparable innovation has occurred in trackers, because the price of solar panels themselves was so high that there was no reason to innovate the trackers. However, the cost of solar panels now is the same or less than the price to manufacture trackers, so we believe it is the perfect time to innovate.

Previous innovations in the software used to track the sun have dropped costs up to 20%, but we see this as linear progress when we believe the opportunity is truly exponential. Current tracker manufacturers will tell you that 80-90% of the cost of trackers today is due to the price of steel, which is out of our control. Therefore, proceeding with the status quo will result in little progress. This is your opportunity to propose a new methodology, material, or infrastructural design and be selected as a finalist to develop a proof of your concept.

The results of this competition will be an immediate drop of one-third of the cost of solar, worldwide. We see that as a significant impact on the world.  Accept this Challenge today, and join us in taking a true step toward abundance through energy independence.

In the past solar energy simply cost too much for most people and storage simply wasn’t practical. But times have changed. Our integrated systems allow you to focus, concentrate and catch solar energy during the day, keep it in an ultra-efficient 112-yearLTO storage bank, and charge as needed from a variable speed genset.

From telco tower to homes, resorts to the grid it means huge savings versus traditional power distribution. Most people outside the largest cities will see savings of 40-50% from their monthly power bill.

Best of all, you don’t pay for equipment, we lease you a system tailored to your energy needs. 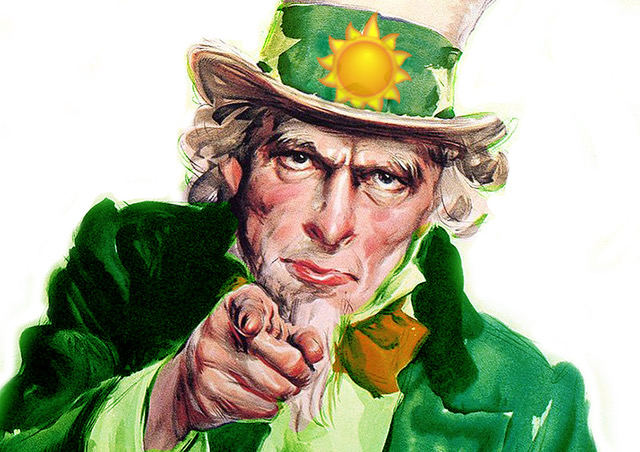 RMD Energy is committed to awarding up to $60,000 in overall prize money:

Phase I: Ideation Round

What you need to do: Submit your idea on how to move a solar panel to track the sun.

Who can participate: We welcome experts and non-experts by giving large awards to qualified submissions that can be reduced to practice, intended to be the model for future manufacturing, and smaller awards to creative ideas that spark new innovation.

What you can win: The Judging Panel will select up to 3 finalists who will receive $5,000 and any necessary feedback in order to pursue their Phase II proof-of-concept design. Additionally, RMD will select up to 5 Novel Idea Winners to receive $1,000 each.

What happens next: This is a non-elimination round. While only 8 entries will receive cash rewards, all teams are welcome to advance to Phase II.

What you need to do: Develop your idea into a robust design

Who can participate: Anyone can enter Phase II. You do not need to submit a Phase I entry to participate in Phase II.

What you can win:

At a minimum, trackers must be able to:

Additionally, entries that can satisfy all minimum criteria will then be ranked according to the additional judging criteria below.

The Novel Idea Awards will grant $1,000 each to the 5 most innovative or original ideas submitted in Phase I. We recognize that great ideas may not be fully technically or physically viable, however, they may serve as a catalyst to spark a design idea that can develop into true viability. Here is how we will judge the Novel Ideas:

The challenge is open to all adult individuals, private teams, public teams, and collegiate teams. Teams may originate from any country. Submissions must be made in English. All challenge-related communication will be in English.

No specific qualifications or expertise in the field of solar, renewable energy, or industrial design is required. Prize organizers encourage outside individuals and non-expert teams to compete and propose new solutions.

Submissions must be made online (only), via upload to the HeroX.com website, on or before the submission deadline (see challenge timeline). No late submissions will be accepted.

If an innovator is selected as the first place winner in Phase 2, the innovator must agree to provide access to their technology in the form of a licensing agreement or receive a stake in a commercial enterprise in exchange for use of their technology. Exact terms will be mutually negotiated. Notwithstanding granting the Challenge Sponsor license for the submission, as noted above, Finalist retains ownership of the submission.

Based on the winning criteria, prizes will be awarded per the Judging Criteria section above. In the case of a tie, the winner(s) will be selected based on the highest votes from the Judges.

In the case of no winner, RMD Energy reserves the right to withhold the Prize amount. In place of the original prize amount, RMD Energy must issue a Consolation Prize to the team or individual closest to the winning solution in the amount of at least 10% of the total original prize purse.

Announcing the results of the RMD Energy Solar Tracking Challenge

RMD Energy would like to thank everyone who followed and contributed to the Solar Tracking Challenge. We set out seven months ago with an audacious goal to redesign how solar panels track the position of the sun. This challenge sought to create an immediate drop in the cost of solar, worldwide. Innovators were tasked with creating a Proof of Concept prototype to demonstrate their solution.

We received innovative ideas from around the world and from innovators ranging from amateur inventors all the way to expert professionals. A number of solutions suggested a viable approach; however, no solution was able to demonstrate a proof of concept design.

What's Next? RMD Energy is working with competitor Issac Li to invest in and develop a proof of concept and physical prototype of Issac's idea and create the next generation of solar tracking.

We are excited to undergo the next steps of this journey in collaboration with Issac Li to develop a more economical tracker to reduce the cost of and increase the accessibility to solar energy.

This is your very last call. There is just one hour remaining to submit your entry to the Solar Tracking Challenge.

Any last minute questions? Please ask them in the challenge forum.

If you're still assembling your submission, you have exactly 8 hours left to complete it!

This is your official two day reminder! Submissions are due Oct. 19, at 4:59 p.m. Pacific Time (Los Angeles).

If you haven't already, now is the time to begin uploading your submission to HeroX. You can save your submission as a draft and come back to edit it at any time before the deadline. Even if you submit it early, you can still make changes!

Best of luck and please let us now if you  have any questions in the challenge forum.

Hello Innovators, How are you progressing?

We have let you work away over the last 6 weeks or so and thought it would be a good time to check in with the community generally. Last week I attended the largest solar industry expo in North America. At it more than 600 vendors showed off the ‘latest and greatest’ in solar, tracking, and energy storage. But most notable to me, only one vendor had a 2-axis tracker on display. That company, Green Source Energy is a partner to RMD and its President, Eric is one of our 5 judges. The point is that nearly no innovation in tracking and especially dual axis tracking appeared. The innovations on which you compete (once the criteria are met) will literally change the landscape for the entire solar industry.

I am enclosing a couple of images from the expo of interesting single axis trackers, but to all of you, realize that your innovations have far reaching results, so keep plugging away. 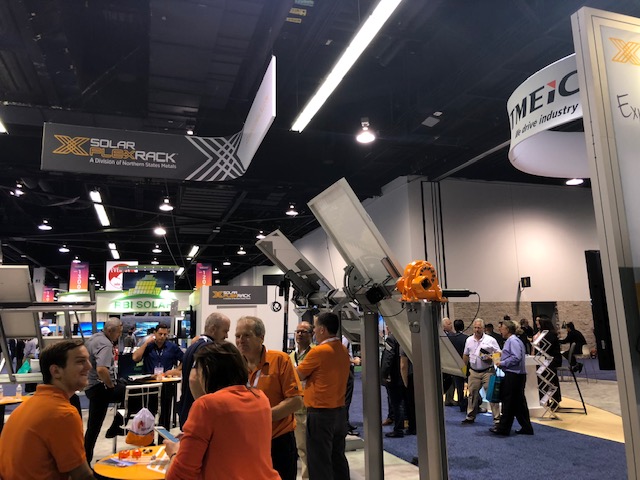 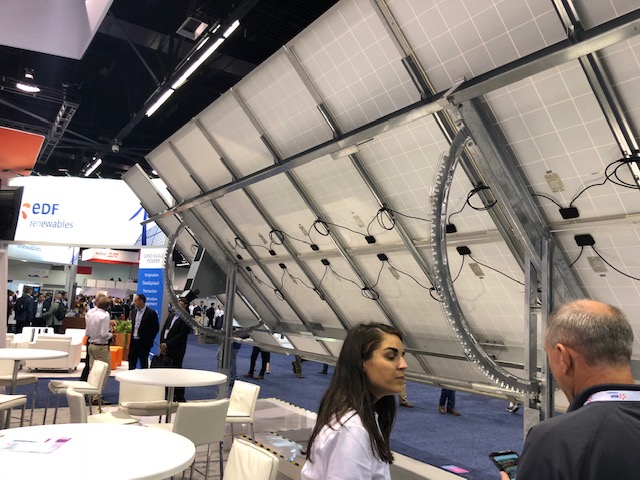 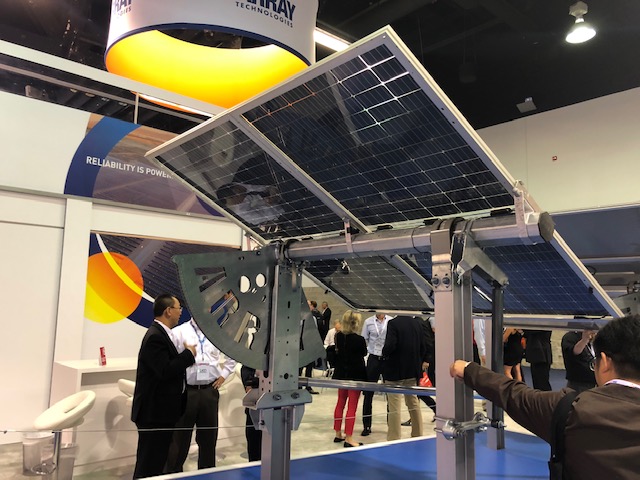 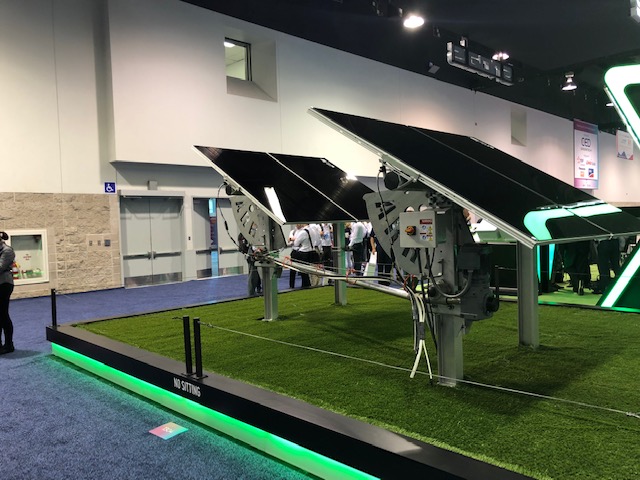