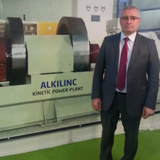 We would like to participate in your Space studies with our project.


Our project and prototype studies are continuing to apply our ALKILINC KINETIC POWER PLANT Technology as the main power source of the spacecraft designed for Mars Journey.

It takes 8 months to go to Mars with current technologies and rocket fuels. Man-made staying in a gravity-free environment for 8 months causes health problems.

VASIMR and MPD rocket-powered spacecraft will be able to go to the planet mars in 39 days, moving at a speed of 100 km per second. These motors need 1 MW of electricity.

It takes about 5 football fields to produce 1 MW of electricity continuously with solar panels, and traveling is difficult with such large panels.

ALKILINC KINETIC POWER PLANT can be transported to space and the electricity needed by the spaceship can be generated. The kinetic power plant can be installed with a 100 kWh input and a system that will generate 1,700 kWh of electricity at the 10th Station with an increase of 33%.

In a second system from the kinetic power plant, it is loaded on the ship for the colony to be established on Mars and used for its needs on the planet Mars.

The first unit will be 100 kW input and the first start will be made with the battery group.

The weight of the Mars ship is calculated as an average of 2,000 tons.

The spacecraft can be made midway between the Earth and the Moon. Even if a screwdriver falls, it stays in place? The distance of the moon from the earth is 400,000 km.

VASIMR The VASIMR plasma thrusters, which are being tested in laboratories today, can reduce the journey to Mars, which is currently planned to take 6-8 months, to 39 days with the electricity it will receive from an advanced power plant inside the spacecraft in the near future.

Considering that Columbus' first expedition once took 34 days, a 39-day trip to a planet sounds good.

MPD technology works by using the Lorentz force, by accelerating charged particles by the effect of an electromagnetic field and obtaining thrust.

It is a powerful engine type that can be used in interplanetary missions and especially in manned missions. It has very high fuel efficiency, namely specific impulse and thrust. So much so that, although only the VASIMR model is more efficient as a specific propulsion force, the thrust produced by MPD is the strongest among electric propulsion systems.

So why isn't he using it in space yet?

Because the solar panels will not be enough for a trip to Mars that will take a few weeks with MPD. Thrusters such as MPD and VASIMR can operate at full capacity with large amounts of energy of 1 MW.

How does MPD work?

It basically has two metal electrodes; a cathode in the center and a cylindrical anode around the cathode. When a high voltage electric current is formed between the anode and the cathode, the cathode begins to scatter electrons. Plasma is formed when these electrons collide with the ionized fuel. Electrons returning to the power source via the cathode create a magnetic field, and this magnetic field interacts with the electron/electric current between the anode and the cathode, creating an electromagnetic force that pushes the plasma out (Lorentz). In addition to this operation, there are two configurations called applied-field and self-field. In the applied-field, the exhaust chamber is surrounded by magnetic field-generating magnet coils, which makes the impulse-generating plasma current more stable and increases its velocity. The self-field and the central cathode are extended backwards. Although Lithium gives the highest performance as a fuel, Barium, Xenon, Neon, Argon, Hydrogen and Hydrazine can also be used.