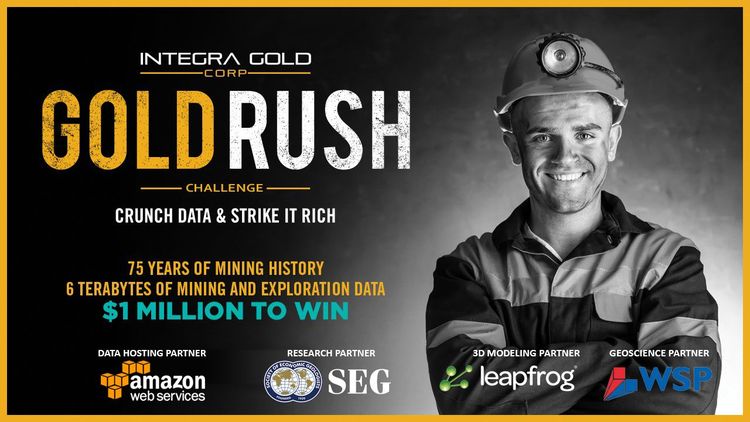 Integra Gold (www.integragold.com) is excited to host the Integra Gold Rush Challenge, one of the largest ever mining industry incentive prize competitions.  We are seeking your help to hunt down the next big gold discovery on our property located in Val-d'Or, Canada - which literally translates to the "valley of gold".  If you're entering - don't delay! Submissions are due by 11:59pm PT on Dec. 1st, 2015!

Val-d’Or, located on the eastern tip of the prolific Abitibi Gold Belt, has been on the map since 1923 when gold was first discovered in the area. The surrounding belt has produced more than 135 million ounces of the mineral.

Adjacent to the town of Val-d'Or is the Lamaque Mine. Opened in 1935, it remained in operation for 50 years, processing more than 24 million tons of ore and 4.5 million ounces of gold.

But in 1985, faced with labour unrest and a low international gold standard, the owners decided to cut their losses and closed production at their Lamaque Mine, leaving it to collect dust and fade into history as one of the longest operating and highest producing mines in the Abitibi Gold Belt.

The Lamaque mine remained untouched and relatively forgotten for nearly 30 years, until Integra purchased the original land, permits and infrastructure of the old Lamaque and Sigma mines out of bankruptcy in October, 2014.

While the initial aim of this acquisition was the milling facility at surface, the truly important part of the purchase turned out to be... data. Lots of it. Over 6 terabytes of data was discovered, spanning 75 years of mining data from the historic Sigma and Lamaque mines.

We believe the production closure of the Lamaque Mine in 1985 had nothing to do with dwindling deposits. The Lamaque main plug had only been mined to a vertical depth of 1,100 meters, while its immediate neighbour the Sigma Mine was mined down to a depth of 1,830 meters, and there were indications that the Lamaque mine still offered significant untapped resources.

Somewhere within the 2.7-million-year-old geology of the Canadian Shield, there was a treasure waiting to be found. However, at over 6 terabytes, the sheer volume of data we now have on these mines would take Integra years to analyze on our own. We need a faster and more cost-effective method to analyze and interpret the data to identify additional gold targets.

Welcome to the Integra Gold Rush Challenge, an incentive prize to point us towards the next big gold deposit on our Sigma-Lamaque property. We want to unlock the value of this database by harnessing the collective brainpower of thousands of individuals around the world. We will be turning over our database to the public to help direct us towards this next discovery. The challenge is open to anyone, from any background. Integra will be offering prizes totalling CAD $1 million for the most innovative and comprehensive solutions.