Dive straight into the data here.

We all like beautiful sandy beaches, and we all love the sea turtles that nest on them, right? But considering climate change and future sea level rise projections, how do we continue to maintain healthy beaches in harmony with sea turtles? - that’s the crux of this challenge.

To preserve our beautiful sandy beaches, the Bureau of Ocean Energy Management (BOEM) authorizes giant dredges to vacuum up sand from the bottom of the ocean to replenish eroded beaches. In the process of collecting sand, however, sea turtles resting near or on the seafloor can be sucked up by the dredge and can be injured, often lethally.

Over twenty years ago, a team of experts developed sea turtle relocation trawling methods to try and prevent sea turtles from being injured or killed during dredging. Essentially a fishing net is dragged along the seafloor to capture sea turtles near where dredging is taking place. These captured sea turtles are then moved out of the dredge area to keep them safe.

Where you come in:

The efficacy of sea turtle relocation trawling has yet to be quantitatively tested. BUT BOEM is ‘swimming’ in great data - and they need your help! Your use of these unique datasets, and potentially data from other sources, will help BOEM understand more about:

Tackle this challenge and the next time you are enjoying your favorite drink on a white sandy beach you can know that you helped keep beaches sandy AND sea turtles safe!!

The data and other helpful resources are available here.

What is Sea Turtle Relocation Trawling?

Sea turtles are intentionally captured and relocated out of the area of dredging operations to reduce risk of sea turtles being injured by a dredge. Modified shrimp trawling equipment is used to sweep the sea floor to capture and relocate sea turtles. This involves the dragging of a net (dim 15 x 35ft) along the sea floor behind a trawling boat to capture turtles. Typically a vessel with two trawling nets (example image below) is operated in a given area at the same time, and each trawl can be pulled for no more than 40 minutes to prevent serious injuries to captured turtles. Relocation trawling must maintain a safe distance from the dredge and other vessel traffic in the area. Therefore, the trawler is often not working directly in front of the hopper dredge but is instead continuously working to remove species from the general dredging area.  Relocation trawling vessels are smaller than dredges and therefore more restricted by the weather conditions in which they can safely operate. Therefore there are times that the dredge operates, but trawling does not. 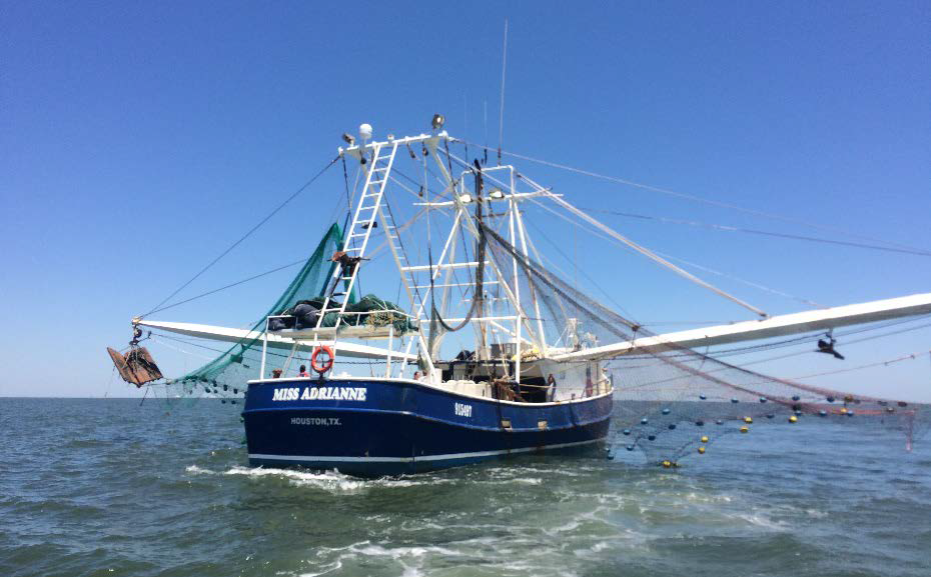 Trailing Suction Hopper Dredges are specialized ships that have a hollow hull which can be filled with sand. Fitted with powerful pumps, the dredges suck sand from the surface of the seafloor through long intake pipes, called dragarms, and store it in compartments in the hull (a.k.a. hoppers). Trailing suction hopper dredges typically have two dragarms, one on each side of the vessel. A dragarm is a pipe suspended over the side of the vessel with a suction opening called a draghead which sits on the bottom and sucks up sand like the head of a vacuum.  Depending on the hopper dredge, a slurry of water and sand is generated from the plowing of the draghead “teeth,” by using high pressure water jets, and the suction pumps. The water and sand slurry is pumped into, and distributed within, the vessel’s hopper where the sand settles to the bottom and the remaining water is pumped back into the ocean. When the hopper attains a full load, dredging stops and the ship travels to either an in‐water placement site, or hooks up to an in‐water pipeline, where the dredged sand is offloaded. The average speed for hopper dredges while dredging is between 1‐3 knots, with most dredges never exceeding 4 knots. The draghead width is approximately 10-16 feet and approximately 6 inches to 2 feet of sand is removed during each pass of the draghead.

With the solutions from this challenge, modeled trawling scenarios using new or varied relocation or turtle avoidance approaches, which have data-backed confidence, will allow BOEM to intelligently test the approaches in the field and make new recommendations on gear or operation modifications that trawlers can make to increase probability of higher at-risk turtle catch rates and lower bycatch. BOEM will better understand the likely effectiveness of a planned trawling operation under different environmental conditions relative to the risk of lethal capture by dredges. Sea turtle relocation trawling operations will be safer and more effective, and better data will be collected.

--> Watch now: "What can you do to cause a breakthrough?" or view the full webinar here.

BOEM has provided two primary data resources (available in the Resources tab) that include:

Solvers can also explore secondary datasets, but should focus on the two primary data sets for exploration. Additional data can include environmental covariates (e.g., oceanographic data (provided here), and dredge data (provided in the challenge data in the Resources tab). Please note that BOEM cannot guarantee the quality and reliability of secondary data as they relate to the primary data.

Driving Questions and Assumptions to Validate

In the exploration of the data, solvers should consider the following questions, based on the assumptions listed below, when you submit your solutions:

--> Watch now: "What is BOEM trying to understand?" or view the full webinar here.

Solvers will run the data through their preferred and ideal analytic tools to create outputs that help BOEM understand trawling effectiveness and plan future field activities. In the process, explain the labor that goes into preparing data for such analyses. What could be done to the data beforehand to make that transformation work less intensive? What data do you feel, if you had easy access to, would make the process easier and also make the analysis more valuable?

Up to four prizes will be awarded to the best submissions received that provide insight into BOEM data, insight into trawling practices, and inform future data and field activities. The first three prizes are tiered and the runner up prize is for a solution that demonstrates a particularly innovative recommendation for improving methods of trawling for sea turtles.

HOW DO I WIN

To be eligible for an award, your proposal must, at minimum:

Be sure to consider the judging criteria weights in constructing your submission.

The Prize is open to anyone age 18 or older participating as an individual or as a team. Individual competitors and teams may originate from any country, as long as United States federal sanctions do not prohibit participation (see: https://www.treasury.gov/resource-center/sanctions/Programs/Pages/Programs.aspx). If you are a NASA employee, a Government contractor, or employed by a Government Contractor, your participation in this challenge may be restricted.

Submissions must be made in English. All challenge-related communication will be in English.

You are required to ensure that all releases or transfers of technical data to non-US persons comply with International Traffic in Arms Regulation (ITAR), 22 C.F.R. §§ 120.1 to 130.17.

No specific qualifications or expertise in the fields of ecology, dredging, or trawling is required. BOEM encourages outside individuals and non-expert teams to compete and propose new solutions.

Innovators who are awarded a prize for their submission must agree to grant the United States Government  a royalty-free, non-exclusive, irrevocable, worldwide license in all Intellectual Property demonstrated by the winning/awarded submissions. See the Challenge-Specific Agreement for complete details.

You may be required to complete an additional form to document this license if you are selected as a winner.

Submissions must be made online (only), via upload to the HeroX.com website, on or before December 15, 2022 at 5pm ET. No late submissions will be accepted.

Based on the winning criteria, prizes will be awarded per the weighted Judging Criteria section above.

The determination of the winners will be made by HeroX based on evaluation by relevant BOEM specialists.

Thank You for your Submissions

Just like that, it’s over! Thank you to all of you who sent in submissions. We can’t wait to finally see what you’ve been working so hard on.

Crowdsourcing would be nothing without the crowd — that’s you! Thank you for being an indispensable part of this process, and using your brainpower for the greater good.

Congratulations on completing your submission. This is not an easy process, and you deserve a pat on the back for your hard work and dedication. Thank you!

You now have less than a day left to submit your Better Call Trawl challenge. Now’s the time to make final changes and send it off!

Please remember that the deadline is at 5pm Eastern Time. We don’t accept any late submissions, so do your best to get it in ahead of time.

We can’t wait to see what you’ve come up with! Best of luck.

The time has almost come! You now have two days left to finish your Better Call Trawl submission. The final project is due on December 15 at 5pm Eastern Time.

We don’t accept any late submissions, so now is the time to make sure that everything is good to go. Double check file formats and make sure that all of your project components are easily accessible.

We are more than happy to answer your last-minute questions about the submission process. Post a question in the forum or leave a comment on this post, and we will be in touch with you.

We can’t wait to see the final projects. Good luck!

This is your one week warning! The final submission deadline is December 15 at 5pm Eastern Time (New York/USA). No late submissions will be accepted, so make sure to give yourself plenty of buffer time.

If there’s anything you’re unsure about, there is still time to ask for help. Post on the discussion forum or leave a comment on this post. We’ll keep an eye out for your questions.

We can’t wait to see what you’ve been working on. Best of luck finishing up your submissions!

This is your official reminder that you have two weeks left to submit your Better Call Trawl solution!

Please remember that we don’t accept any late submissions. It’s a good idea to get 75% of your project done a full week before it’s due to allow time for troubleshooting.

Now is also the time to ask questions and seek help. To ask a question, post on the discussion forum or comment directly on this post. We’re looking forward to hearing from you!

Best of luck in the final stages of your project.

by Bureau of Reclamation
819
Guardians of the Reservoir Challenge
Help sustain America’s reservoirs. We’re looking for ways to remove sedimentation that regularly accumulates in reservoirs.