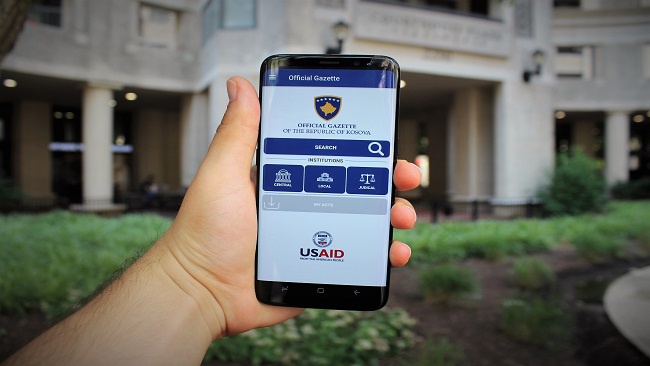 On behalf of USAID Partnerships for Development Project:

What was the development problem the team was trying to solve?

A fundamental element of good governance and rule of law is making the legal framework transparent and easily accessible to all citizens and businesses. This was not common practice for governmental institutions in Kosovo after the war of 1999, and there was no centralized legal information database for legal acts issued by public institutions, requiring citizens and businesses to spend considerable time and energy searching for information.

USAID recognized this gap and, through the Chemonics-implemented Business Enabling Environment Program (BEEP, 2010-2013) and Partnerships for Development project (PFD, 2014-2018), worked with the Office of the Prime Minister of Kosovo to establish a free legal information database: the Official Gazette of Kosovo Online Database https://gzk.rks-gov.net (“OGDB”).

The OGDB is a key element in USAID’s support to economic growth in Kosovo and provides legal certainty to businesses and investors.

What makes your project implementation unique or special?

Kosovo for the first time in its history now has an electronic and fully-accessible database of all legal acts in force in five languages and on mobile devices through specially-created apps. OGDB usage has grown exponentially, as evidenced by data collected from Google Analytics:

Following improvements to the OGDB completed in 2017, it now includes:

What is the name of the technology or initiative? If it doesn’t have a name, please create one

What country(s) was the technology implemented in?

What dates did the technology implementation take place?

First version of the OGDB was launched July 2013, with refinements and upgrades – including mobile applications – being completed July 2017

The upgrades to the OGDB were designed to make it more efficient, easy to use and search from all types of devices, and to extend functionalities for all types of users in accordance with their authority and responsibilities. The project engaged a subcontractor (Komtel PE) to create and later upgrade the Relational Database Management System (RDBMS) to a new version of MS SQL Server 2014, and to use and exploit new features of the server, including improved security, stability, reliability, storage and better end-user experience.

New and upgraded functionalities were implemented to achieve a higher level of usability. Given the high number of visitors who used a mobile devices (approximately 33%) to access the OGDB website, native mobile applications were also developed for Android and iOS operating systems.

The development and improvement of the OGDB, including the creation of mobile apps, increase the development impact of USAID work in Kosovo by strengthening the rule of law and increasing the predictability of the legal system, which is a significant concern for businesses and investors in developing countries.

Improving the OGDB supports better policy development and decision-making by allowing government officials full access to all legislation in force. It supports the comprehensive approximation of Kosovo’s legislation with that of the European Union, which Kosovo aims to join.

Cost and time savings for the Government of Kosovo are significant, eliminating the need for publication in multiple platforms and costly printing of legal acts. The OGDB also creates savings for the private sector, reducing time and costs for identifying applicable legal and regulatory requirements.

For details on level of usage, see statistics above or visit statistics section of OGDB.

Were there any challenges in implementation of the technology? Please describe any lessons learned

One of the significant challenges which was encountered during project implementation was the creation and maintenance of a network of system administrators at central and local government level that would maintain and keep the OGDB current at all times by uploading all new legal acts adopted.

This was overcome through continuous training that lead to a behavioral change and a recognition on the part of both the institutions and the individuals of the importance of the OGDB.

Is this technology project-specific, or could it be replicated to enhance other projects? Please respond to the best of your ability.

The concept of a single unified database containing all laws and other legal acts of a government, as well as the technology to develop such a database, can be easily replicated in most countries.

The technology can have a significant impact in the work of most Democracy and Governance as well as Economic Growth Projects.

If you’d like to record a video summary of your concept, please link to it here.