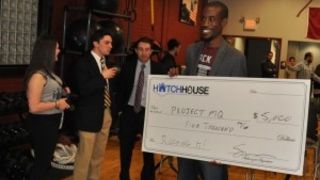 short description
ProjectMQ is the social community for indie game studios and fans worldwide. Gamers use ProjectMQ to discover the best new indie games!
Your Story
Please upload your story using the document and/or video fields below.
Please upload your story - document
YourPathtothePrize.pdf
What is your innovation?
Game discovery is terribly broken, and a lack of quality standards in the gaming industry has flooded the market with poor games. This frustrates gamers that are trying to find and buy quality games. It also makes indie developers/studios struggle to build a social audience and sell their games; the average indie dev only made $500 of revenue in 2014.

ProjectMQ solves both problems, by building a global community of indie game advocates, and curating the best indie games from around the world. ProjectMQ is the top influencer for indie games on Twitter: https://twitter.com/hashtag/IndieDev?src=hash. We built an invitation-only app where our users can enjoy high-definition multimedia from the best indie games worldwide: www.projectmq.com
What is your innovation -- supporting information (optional)
ProjectMQsInnovationSupportingInformation.pdf
Fill in the following one-sentence “mad lib”: A inspired my innovation of B; B is important because of C and has made D impact.
Incredible indie games like Minecraft inspired my innovation of ProjectMQ. ProjectMQ is important because it connects gamers with indie developers, and has helped grow the global indie game community.
What was the motivation behind your innovation?
Our parents got us Super Mario Bros. 3 for Christmas when we were 6, and we’ve been playing video games ever since. Inspired by other social media sites like Facebook, IGN and Youtube, we decided to start(up) a gaming social media site called ProjectMQ.

As fellow life-long game enthusiasts and (aspiring) indie game developers, we are really passionate about helping indie devs. Indie devs have it tough, so we volunteer what resources we have to make them successful. In recent years, with the addition of low/no cost game dev tools and accessible distribution channels, it’s never been easier for anyone to learn game development. It’s clear to us that the future of gaming is indie, and we intend to support that future however we can.
How does your story bring the "Wow Factor"?
The Hatch House Open had more than 70 startups apply from around the world. It was an intense, 3-round competition. The first 2 rounds were grueling critiques of our business plan.

After being selected as a finalist, we began preparing for the remaining round: a live pitch in Pennsylvania. The day before the live pitch, we did a dry run of the pitch to get feedback from our mentors. To our surprise, they advised us to rebuild our pitch from the ground up, a presentation we had worked on for weeks.

Determined to win, I spent the rest of the night creating new slides & a new pitch. I dedicated the entire following day to rehearsing the new presentation. That night, I delivered a captivating pitch that wowed the audience & won 1st place.
Anything else you want to share?
Di-Ann Eisnor and Lupe Fiasco just selected ProjectMQ, out of 700+ startups nationwide, as a finalist for the Neighborhood Start Fund. Di-Ann is a Henry Crown Fellow, & board member for the Grey Area Foundation for the Arts. She's also the Head of Growth for Waze, the GPS navigation app acquired by Google in 2013.

Lupe is an entrepreneur, & a Grammy-winning performing artist. He's also a well-known competitive player of the "Street Fighter" video game franchise. The Neighborhood Start Fund is flying us up to Chicago the weekend of November 19th to pitch ProjectMQ live in the final round. We're honored for this amazing opportunity to present ProjectMQ!

Our site's still pre-alpha, and we're planning to launch our official alpha release this Spring. We share our exciting startup journey, new site features, and more on our ProjectMQ devlog: http://projectmq.silvrback.com/. If you haven't seen it yet, check out our EPIC LAUNCH TRAILER: https://www.youtube.com/watch?v=tCoscCfL5lY
The Incentive Challenge
Name of the incentive challenge related to your story.
Hatch House Open
URL to the incentive challenge (if available)
http://www.hatchhouseventures.com/meet-malcom-marcus-howard-of-projectmq/
Fill in the following one-sentence “mad lib”: The A challenge sought submissions to B. I accomplished this goal through C.
The Hatch House Open challenge sought submissions to identify viable new startups. I accomplished this goal through creating an innovative business plan that detailed ProjectMQ's unique opportunity to disrupt the consumer tech and media industry.
If you convinced someone at a cocktail party they should enter an incentive challenge, what would you say?
Incentive challenges are a great opportunity to apply your specific perspectives and expertise towards solving a unique problem. It's a rare situation where your success is only limited by your creativity and dedication. Even if you don't win the challenge, you created a valuable innovation in the process. You can also expand your network with the organizers, sponsors, collaborators, and others competitors of the challenge.