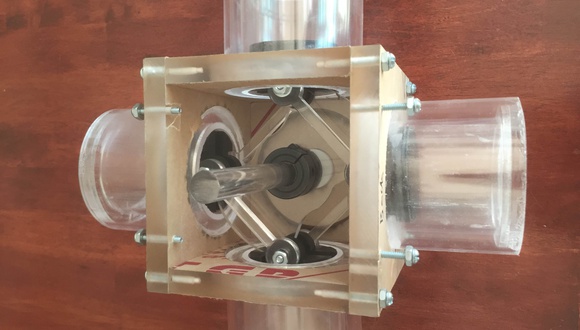 Energy, Environment & Resources , Engineering , Technology
by Jeffery Smith | March 2, 2018
So engines burn cleanly at 2x torque, replace the crank with a fig. 8-shaped cam that keeps the piston at TDC long enough to burn all fuel.

Engines for cars, trucks, farm equipment, boats, planes, etc can all be more efficient--burn less fuel and emit near-zero pollutants. To build this idea, replace the conventional crank with a bi-lobal, figure-8 shaped cam. Arrange four cylinders in a cross, an X. The connecting rods do not join piston and crank, or cam, but join neighboring pistons. As two move toward the central output shaft, the other pair moves toward TDC. Give the cam arcs of enough degrees to keep the piston at TDC long enough at cruising RPM to burn as close as possible 100% of the fuel. The power stroke of 90 degrees in stead of the crank's 180 degrees dramatically raises torque. That allows a lower cruising RPM and lighter weight, both saving fuel and cutting pollution. The prototype works in practice. High torque is preferred for trucks, boats, planes, and racecars, too. Engine makers won't go out of business any time soon and constantly build new factories in developing countries where urban smog is deadly and damaging to child development. Raise the bar so manufacturers must turn to clean alternatives.