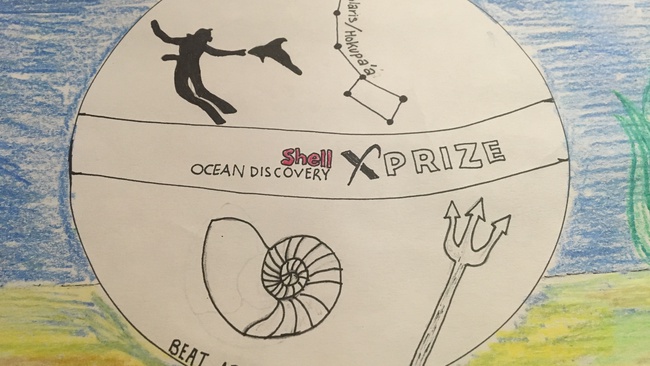 short description
This "treasure" is an unbreakable glass, environmentally friendly sphere designed with images reflecting ocean lore and ocean heroes.
Eligibility
Your Video Submission
Your Submission Description
I designed a “deep sea treasure” that will challenge and ultimately reward the teams in the Shell Ocean Discovery X Prize as they chart the ocean floor. My” treasure” meets the structural and environmental requirements needed to survive in the deep ocean and not disturb the environment and marine life. It also pays tribute to ocean mythology and the to ocean elders who have charted the path for deep ocean exploration.

My deep-sea treasure is a giant solid glass sphere etched with pictures. The sphere should be large enough so that the X Prize teams can detect it either visually or audibly. Constructed of high-tech glass used in submarines, the sphere can withstand 16,000 pounds of pressure per square inch and accordingly would not crack under the pressure of being 4,000 meters under the sea. As a sphere, it would maintain both its structure and design no matter how it falls to the ocean floor. It would not damage marine life and have no harmful environmental effects.

The sphere is reminiscent of an ocean bubble or a glass fishing ball that often finds its way from the ocean to the shore. It also references the shape of the Bathyscaphe Trieste, one of the first vessels to explore the deep ocean.

The sphere is etched with designs that reflect ocean lore and discovery. The most prominent etching highlights the name of the Shell Ocean Discovery X-Prize, so the teams will know they have found the “treasure.”

One etching is a silhouette of “Her Deepness”, Dr. Sylvia Earle who holds the record for deepest solo women’s dive at 1,250 feet under water. I have designed her playing with a dolphin. Sylvia Earle is my personal heroine and I love to think of her being part of the “treasure” on the bottom of the ocean.

The Little Dipper includes Polaris or the North Star, which has guided many ocean explorers. I included it to honor the original Polynesian navigators, including Ocean Elder Nainoa Thompson who guided the outrigger canoe, Hokulea, by following Polaris or Hokupa’a across the ocean.

The Chambered Nautilus etching depicts an animal that has flourished in the ocean depths for over 500 million years. I have included it because this beautiful creature is viewed as symbolic of expansion and renewal. The Nautilus was also the name of the fictional submarine commanded by Captain Nemo in Jules Verne’s 20,000 Leagues Under the Sea and the name of the first U.S. nuclear powered submarine.

The trident is the tool and symbol of Poseidon, the Greek god of the ocean. I have included this to acknowledge the significance of the ocean to human civilizations for thousands of years.

Finally, if you look closely, you will see the words “Beat Army.” This is in tribute to my late grandfather, John P. Craven, and to others who were part of the Navy’s early deep-sea exploration. According to my grandpa, pioneer Navy crews planted a flag with this message at 4000 feet below the sea.
Your Design Drawing