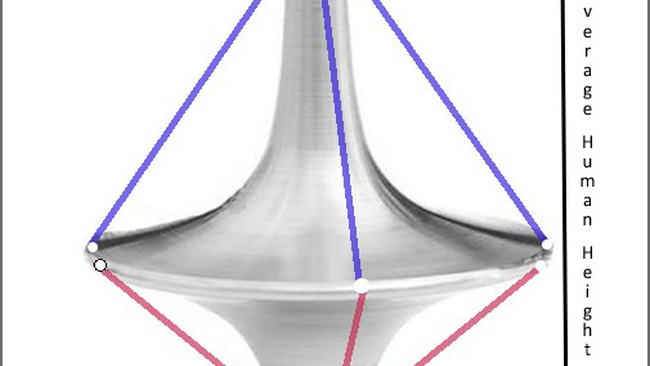 short description
My human-sized modified spinning top is quite simple but will test the abilities of the modern tech devices of the searching teams!!!
Eligibility
Your Video Submission
Your Submission Description
HEROX Deep-Sea Treasure Design Proposal
INTRODUCTION
My name is Melina Daravelis, a 14-year teenage-girl from Athens, Greece.
Following my father’s advice, I became immediately fascinated by the XPRIZE deep-sea treasure design competition.
Following days of thinking for the subject competition, I decided to put through a very simple idea that could be easily constructed, but on the other hand, depends on deep-sea conditions could make teams’ efforts difficult to correctly identify the treasure object.
DESIGN PROPOSAL
My proposal is quite out of the box but straight to the point.
The treasure item I suggest to be built, is a human-sized spinning-top model, with some “extensions / add-ons” to it.
The core element of my proposal is a spinning top (shown in the proposal image). Its size should be average-human height sized.
In the two linear-ends of the core-model, as well as in the oval-shaped area, circular-shaped holes are opened (shown in the proposal image).
Wire-ropes will be installed running from the two linear ends holes, towards the respective holes in the oval-shaped area of the spinning-top.
This proposed spinning top will become orientation-independent, as it is indifferent how my model will land on the deep-sea ocean floor. Any landing is accepted, thus making it easy to fall and land at its landing area in the deep-sea floor. Any damage in the proposed model will be accepted in order to mask the identity of the treasure-model.
In the final landing position, I would like the item to be misjudged by the searching teams. Ideally, my proposed spinning top to resemble a mast of a shipwreck.
In this way in the great depth of the ocean, it will seem like a self-deception/illusion for those who look for it, depending on the deep-sea conditions of the landing site (sand and rock movements, water currents, etc.).
The main body of the spinning top is proposed to be solid without any air sprouts and made out of silicon carbide, a material which is not really expensive but very durable and hard to break (so that the high pressures won’t affect it). Another option for the material is ceramics that are known from the old times for their durability and water resistance. The “mast’s” extensions in the sketch) will be preferably made with thick wire rope (if possible also out of silicon carbide).
Added to that, the colors that will be painted on the spinning top will resemble the ocean floor to camouflage with the surroundings (green, sand-like, brown, grey or mix of all)
CONCLUSION
My deep-sea treasure proposal is based on a very simple kid’s game globally known for ages and transformed it in an out-of-the-box and creative manner.
I believe it will support both the target of the competition (as a treasure-hunt element), as well as a very simple toy to make life difficult for the high-tech underwater explorers.

Melina Daravelis
July the 2nd of July 2018
Your Design Drawing