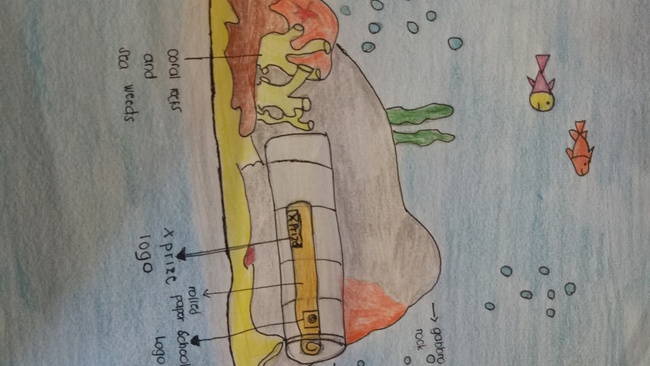 short description
We introduce you our synthetic underwater coral reef treasure design. Why choose this design? So that the searching would be more trickier!
Eligibility
Your Video Submission
Your Submission Description
Unique treasure hunt? We’ve got ours! This object was done with the following efforts of our core team. With the help of the right research and facts we come up with a spectacular idea. Introducing our simple yet sophisticated underwater treasure design. That consists and compose of peridotite rock or gabbro rock which have the density of between 3.0 to 3.4 grams per cubic centimeter. It has 6 m thick with the width of 36 inches and 2m length. The rock would serve as the base of our treasure hunt object because it can withstand the pressure of the 4000 meter depth. At the middle of the rock we will put a flint wide mouth French square cylinder glass bottle that has 4 inches length and 4 inches diameter with 5 inches height. The thickness of the covering is measured as 1 inch and the glass consist the rolled paper where the X-prize logo and our school logo is located.

We will incorporate or make our design by using a special mining drill which will bore or drive a hole in the middle of the rock. This drill would not break the stone because it is highly equipped with advance facilities that would stop the rock from breaking. After which we will insert the strong kind of cylinder glass in the hollow hole that consist the paper inside and we will insert portion of the excavated stone, afterwards. In such a way that it will cover the depth where the cylinder bottle is intercalated. Just in case that it wouldn’t fit we will use a water proof sealant so that the remaining stone parts would stick into the walls of the stone. We would cover up the obvious parts of the sealant with a water proof paint so that it would mask the palpable section of the rock. We would ensure that the rock would not turn upside down because gabbro rock consists of calcium plagioclase feldspar and clinopyroxenitic which is compose of different particles that could endure the ocean pressure. Such this rock is sturdy enough to survive the 4000 meter depth of the ocean floor. The design also consist of corals and seaweeds so that it wouldn’t be prominent and it would mix in with the other marine creatures and coral reefs. Our object is capable of self-righting itself because it is a mono-monostatic object, a three dimensional object that would balance itself and self-right itself. The object that we will use is not harmful to the ocean and to its creatures. Because we don’t use toxic materials as much as possible. The materials we use are Eco-friendly and cruelty free. Rest assured that this object would not destroy marine life and destruct the marine environment. The use of cylinder bottles does not give toxicity to the ocean. And the use of peridotite rock or gabbro rock. The components of these structures does not damage marine animals and species such as fish, coral reefs and other marine biodiversity.
Your Design Drawing