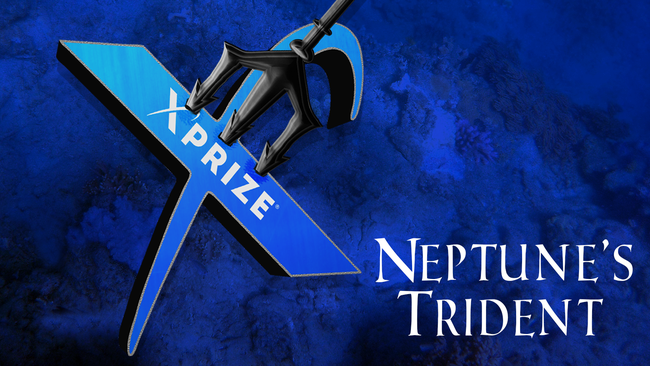 short description
Neptune's Trident impaled on an "X"-shaped base, forged of stainless steel.
Eligibility
Your Video Submission
Your Submission Description
Neptune, the Roman sea god, commands the power of the ocean with his mighty trident. There are many ways to describe Neptune and his trident, but the word that best captures their nature is amazing, because Neptune’s trident is said to have the ability to conjure earthquakes and stir up tidal waves, tsunamis, and storms. Our design for the Deep Sea Treasure XPRIZE competition was inspired by this legendary, and deeply sought-after relic.

The design begins with a large, aqua-blue X, inspired by the XPRIZE logo, as a base. The X is both a symbol for the host organization for the competition, as well as being a reference to the “X” that one would find on a treasure map. We also placed the official XPRIZE logo on the base of the X. The weight of the base will draw on gravity to ensure that the design will land correctly on the ocean floor and won’t tip over. Next, we included a striking trident in the design, which is fused to the X. Upon locating the treasure, the Shell Ocean Discovery competitors will find the trident impaled into the X base, awaiting its new master.

The material used in forging our treasure is marine-grade 316 stainless steel. The steel can withstand deep-sea water pressure, has anti-corrosive properties, is nontoxic, and produces a high-shine appearance. After extensive research, we consulted with an expert professional from a fortune 500 company to confirm the suitability of 316 stainless steel for this project. The marine-grade blue coating on the base also provides a smooth finish and durability. The materials were chosen for their ability to withstand the harsh ocean environment while still being nontoxic to the ecosystem, so they are eco-friendly.

Find the trident, control the ocean. The team that finds Neptune’s trident will have the power of the ocean on their side as they finish the Shell Ocean Discovery XPRIZE competition.
Your Design Drawing