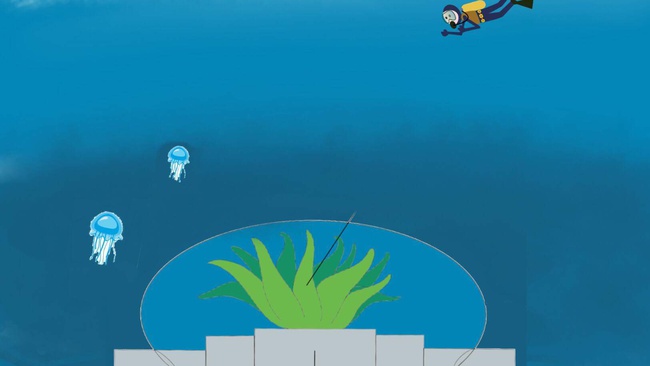 short description
It is a cribrinopsis fernaldi inside an oblong shaped aquarium that has a flat base with 3 dumbo octopi inside of it.
Eligibility
Your Video Submission
Your Submission Description
Our inspiration for making this idea; ANTHAZOA OCTUA, to happen was when we saw a picture of a cribrinopsis fernaldi and an adorable dumbo octopus, while studying for marine life that lives in the ocean as a possible threat or a minor foe to our invention.
We had chosen ‘Anthazoa Octua’ as the name of innovation for;
Anthazoa means that it is a part of a family of marine invertebrates; such as the sea anemones, stony corals, soft corals and gorgonians. While “Octua” was inspired by merging the words “Octopus” and “Aqua”, together as one.
For this contraption we suggested that these will be consisted by the following materials:
An oblong shaped like aquarium that has a flat base made out of acrylic glass. This type of glass could be made from natural raw materials such as sugars, alcohols or fatty acids, according to new research. Compared with the previous chemical production process, a biotechnological process is far more environmentally friendly.
Create two small openings on each side of the aquarium and attach the two hoses on each sides.
By using a plastic DC motor, attach the hose to the machinery’s left side for the water to enter; and attach the other to the right side for the water to exit. It’s like a driving process that sucks in and releases the water out from it in order to make the tentacles move on its own.
Us innovators decided that the tentacles of Anthazoa Octua will be made out of an endo skeleton that will be covered in silicon. When it comes to the environment, silicone is highly durable and more ocean friendly than plastic.
For the 3 dumbo octipi that is found in the middle of our invention; we encourage the builders to use coloured plastic materials such as bottles to be carved in a manner that will resemble these creatures. And the last but not the least, we would also love to place some pebbles and a rock on the middle part of our creation, in order for the three octopi to be securely placed on its base.

Our designer decided to make the cribrinopsis fernaldi’s colour to be dark green in order to have a ‘fearsome’ vibe to it, as well as to keep predators such as the angler fish, the cookie cutter shark, the whale eating shrimps, the grenadier fish and etc. to keep its distance from it. She also decided that we should put 3 dumbo octopi with our favoured colors in its ‘mouth’ as a cipher of ‘us’ innovator’s while surrounding the octopi with pebbles to keep its balance. We prefer that the logo of Xprize will be placed on top of the red dumbo octopus’s ears; as well as our school’s trademark; which is Holy Name University, to be placed on the biggest stone in the middle.
Your Design Drawing