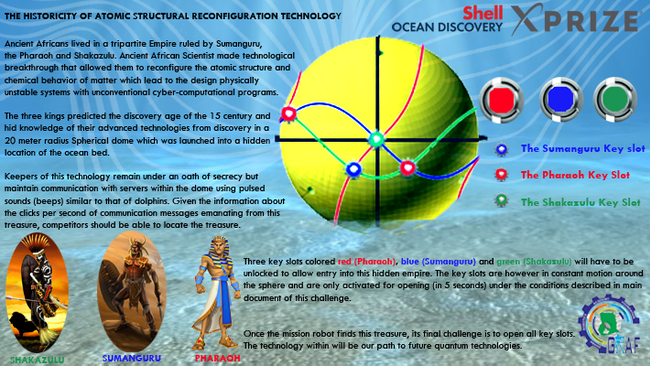 short description
Discovering the secrets of atomic structural reconfiguration; Unleashing a disruptive wave of unconventional cyber technologies.
Eligibility
Your Video Submission
Your Submission Description
We propose a mythical treasure hidden in the ocean bed 4.5 million years down the line of historic Africa.

The early Homo Sapiens in our mythical historicity of Africa lived in a tripartite Empire namely the Ghana Empire ruled by Sumanguru, the Egyptian Empire ruled by the Pharaoh and the Etheopian empire ruled by Shakazulu. These kingdoms by the 2nd Century, had broken the barriers of natural limitations with technologies that allowed them to design physically unstable systems under the control of unconventional cyber-computational systems. The key to their success was a technological breakthrough that allowed them to reconfigure the atomic structure and chemical behavior of matter.

The three kings predicted the discovery age of the 15 century several years before its occurrence and decided to isolate their technology from the rest of the world. They made a 20m radius spherical dome from dragon glass (can be designed with corrosion resistant fiber) with internal conditions to preserve their servers and technological documentations. With the ability to alter atomic structure, their scientists downsized all relevant possessions and technologies of the empires till they could fit everything into this sphere. The sphere was burried in a secrete location 4,000 meters down the ocean. Their technology from that day onwards escaped from the surface of the land and remains hidden in the ocean bed till this day.

We propose this sphere to be the shell ocean discovery XPRIZE hidden treasure. The following features of the hidden sphere will guide competitors in their quest:

1. The hidden servers establishes communication with their outside environment using pulsed sounds (beeps) similar to that of dolphins. The unique feature that distinguishes their messages from that of the dolphins is the number of beeps per second. The servers of this ancient empire use dolphins as agents and routers for their undersea explorations and communication. Given the information about the clicks per second of communication messages emanating from this treasure, competitors should be able to locate the treasure.

2. Three key slots colored Red(Pharo), Blue(Sumanguru) and Green(Shakazulu) will have to be unlocked to allow lifting of the sphere without explosion. The key slots are however, in constant motion around the sphere and are only activated for opening(in 5 seconds) under the conditions described below:

a. The Red key slot traverses the path of a sine wave along the horizontal axes of the sphere and is activated for opening whenever it crosses the path of the Blue key slot.

b. The Blue slot traverses the path of a cosine wave along the horizontal axes of the sphere and is activated for opening whenever it crosses the path of the Green key slot.

c. The Green key slot traverses the path of a tan wave across the horizontal axes and is activated for opening whenever it crosses the path of the Red key slot.

Once the mission robot finds this treasure, its final challenge is to open all key slots. The technology within will be our path to future quantum technologies.
Your Design Drawing