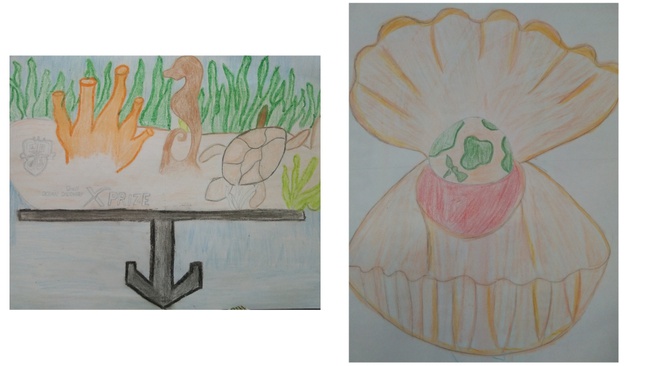 short description
Our design is simple, affordable yet unique.It is not harmful towards the marine environment. It is also useful and very benificial.
Eligibility
Your Video Submission
Your Submission Description
0ur design looks like a simple and ordinary rock we usually see in sea. But there is a trick in it because it is actually a shell disguise into a stone .The rock that is use is an actual rock that we will see in a 4,000 meters deep. We will engrave the design to the stone namely- sea horse, sea turtle, and the corals. The other design is made up of recycled plastic bottle. We cut the bottle and formed it into seaweeds and sea anemone. Our shell is also composed of a plastic bottle, we compiled the plastic bottle and form it like an actual shell using the cement. The cement is a waterproof that can withstand the pressure in the said meter. Aside from that, we will also camouflage our design in the rocks we see in the sea.
Our sea shell is not harmful into ocean because it is from recycled material, in fact the materials that we use is beneficial towards the marine animals since it can serve as their new home. The cement that is use to compile is safe too since it does not acquire harmful elements.
. Our design is something mysterious. The team that will find our designed deep-see treasure might find it hard to see it because they might think of finding something unusual to the ocean but as an alternative and to trick the treasure hunters, we designed something that is usual to the sea. They might not think that it is part of the treasures. At the bottom part of our design, we attached an anchor with an arrow pointing the sand so that the moment you fall our design onto the ocean, it would help our designed object to sink and in order for it not to flow and for it to withstand the pressure underneath the 4000 meter depth. The anchor isn’t something that we usually see that the ships are using. Our team designed an anchor ourselves. The arrow is place at the middle and it is connected to the thick horizontal formed object, it weighs 20,500 pounds. Above the anchor are the designs that we have come up with which is our main treasure, the shell. The inner seashell is formed by plastic bottles and being covered with already dried cement. And make sure that the cement is hard enough and well built for it to withstand the pressure under the said meter. It is formed as a stone to trick the treasure hunters. And the physical appearance of the stone is also engraved the XPrize logo and the Holy Name University’s logo. When you design the shell, make sure that you can open it. Inside the shell there is a globe alternative to a shell which represents the world and the Philippine's map being highlighted which also represents our country.
Your Design Drawing