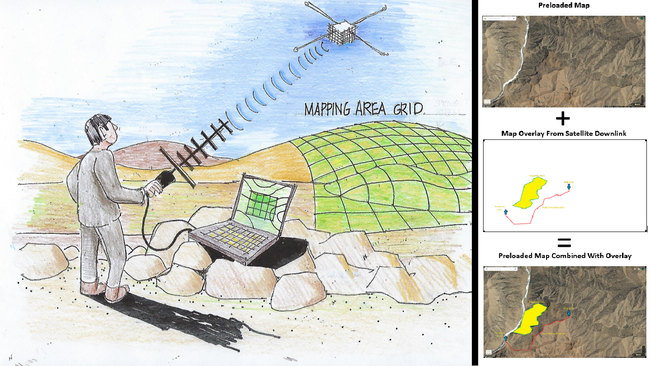 Enables the transmission of detailed, annotated maps (i.e. weather, enemies, and objectives) without the overhead of large data file sizes.

Introduce yourself or your team

What makes you an ideal candidate for this Challenge?

Jason has way too many hobbies. Some of these hobbies include electronics, programming, robotics, woodworking, and amateur astronomy. Jason participated in the NASA Space Robotics Centennial Challenge (2016-2017) whose goal was to develop and display abilities of the R5 robot. He was a solo team that competed with 405 other teams. After making it as far as the final 42 teams with valid submissions, he missed the top 20 finalists by 1.894 seconds (estimated). He also has developed many electronics projects utilizing Arduino, Raspberry Pi, RFID, magnetometer, accelerometer, gyroscopes, and I2C.

Brent also has way too many hobbies and contributed to Jason’s hobbies by supplying him with electronics kits and computers starting with a Timex Sinclair in 1982. Brent is a Landscape architect, photographer, amateur astronomer, artist, woodworker, and science enthusiast. Brent combined astronomy and photography starting in the mid 80’s with an 8-inch Newtonian reflecting telescope. And of course, being in Florida, both Brent and Jason have made numerous trips to Cape Canaveral on NASA’s various launch days.

A typical CubeSat can only transfer 1.8 MB of data per day (combined uplink and downlink).

Highly detailed satellite images are approximately 3 GB per square mile. That would take over FOUR YEARS to transmit one square mile!

The small overlay size would allow the transmission of up to 66 different regional annotations in a single day.

What is the size of your proposed solution?

This solution will easily fit in CubeSat space less than 1.5U.

Does your solution help Special Operations Forces missions? How?

Data from Command Control to Special Forces
• Weather data – is important in determining whether to take shelter or head to high ground due to heavy rain, temperature swings, dust storms, etc.. GIS data can highlight dangerous areas prone to river flooding, landslides, etc.
• Establishing cover – is facilitated with GIS data showing terrain, vantage points, and target locations
• Rendezvous points – can be communicated with GIS data for extractions, force combination, and mission objectives.
• Enemy locations – can be communicated via GIS data to show location, size, and type of enemy forces.
• Landmarks – can be communicated via GIS to help with visual navigation.

Data from Special Forces to Command Control
• Enemy locations – can be communicated via GIS data to show location, size, and type of enemy forces.
• Surveillance of target – such as force movements, activities, man-hunting, and hostage tracking.
• Encrypted and fast – Transmit information back to command quickly and securely.

Problem:
• Special Forces need up-to-date maps with enemy locations, mission objectives, rendezvous points, and weather conditions.
• Oftentimes Special Forces are deployed to areas out of range of traditional communications.
• Satellite phones are not secure and text messages are limited to 160 characters.
• Detailed maps use a lot of storage space. Transmitting maps would also use a lot of bandwidth.
• CubeSats have limited bandwidth and are typically only available 3-16 times a day for up to ten minutes.
• Transmitting a detailed map of one square mile would take over FOUR years!

The Raspberry Pi 3 Model B voltage requirement is: 5 V

The Raspberry Pi 3 Model B base power consumption is: 400 mA

Recommended payload operating temperature should be between -20 C to +60 C.

This is based on the innermost range of the components listed below.

Raspberry Pi has been reported to operate between -100 C to + 85 C.
https://www.geek.com/chips/raspberry-pi-proven-to-be-stable-when-submerged-in-liquid-nitrogen-1555235/
https://raspberrypi.stackexchange.com/questions/103/whats-the-maximum-minimum-running-temperature

Commercial SD cards are specified to operate between -20 C to +65 C.
http://www.cubesatkit.com/content/faq.html

Electronics in general should operate between -20 C and 60 C
http://cubesat.ece.illinois.edu/Structure.html

Data transfer rate is based on a standard CubeSat rate of 1.8 MB per day as determined in “DIY Comms and Control for Amateur Space” by Sandy Antunes. This includes both uplink and downlink communications.

This is a good average depending on the geographic location and the type of orbit.

Approximately 8 GB of this will be used by OS and Map Overlay library management.

The remaining 120 GB is enough to store over 4 million map overlay files at 28 KB.

Information that has already been download can be deleted after each orbit.

No bus stability or attitude control is necessary. Assuming there are four dipole antennas mounted perpendicular to each other in a cross shape (see next section).

Can you identify any additional platform accommodation requirements for your solution?

Four dipole antennas mounted perpendicular to each other in a cross shape.

This will ensure that no matter how the satellite is oriented relative to the ground, a signal can still be received or transmitted.

Assuming the transceiver frequency is between 430 and 450 MHz, one-half wavelength antennas about 35 cm will be sufficient.

Can your concept can be implemented with current state-of-the-art flight-qualified components, or will it require additional development? Please describe.

All required software is open source.

No specialized GIS software needs to be created.

This can be accomplished using existing technology.

Software Setup:
• This can be accomplished using GIF or PNG image files with transparency.
• Existing open-source software called ImageMagick can easily separate the annotations from the map. In fact, I have already included working code in the attachment.
• CSS and HTML language which is already included with every browser can join the annotations with the maps. I have also included working code for this in the attachment.
• Development of complex GIS software is unnecessary.
• Onboard Satellite Prioritization algorithm will determine what to upload or download based on priority and limited time.

Intellectual Property: Do you acknowledge that this is only the Concept Phase of the competition, and all ideas are to remain the property and ownership of USSOCOM for future discretionary use, licensing, or inclusion in future challenges?