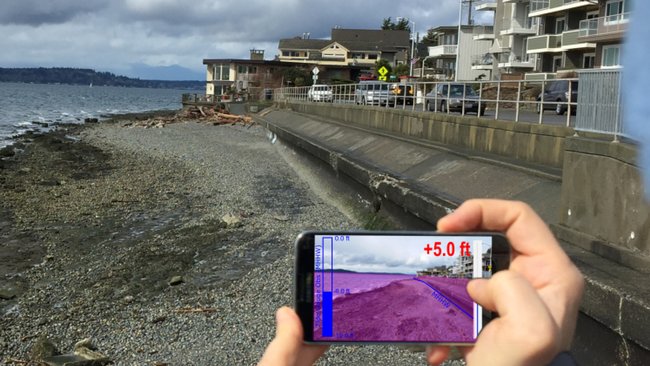 short description
Sea It Rise enables you to plan for sea level rise impacts using your smartphone as a data collection and visualization device.
Eligibility
Mobile ocean app solution and impact
The seas are rising and will rise faster later this century. The historical data is clear and the scientific consensus is unequivocal. Even so, the rate of change is small, and the desire to adapt to sea level increase is not overwhelming. This is unfortunate because sea level rise directly affects public safety, local fisheries, shipping and trade. Indeed, since human society has flourished during a period of relative sea level stability, almost all our coastal infrastructure and livelihoods are built around the current height of the ocean. Unfortunately, if often takes serious weather events like Hurricane Katrina or Tropical Storm Harvey to remind us of the fragility of that infrastructure.

One problem that exists is the simple fact that “seeing is believing”. While the seas rise and fall each day with the comings and goings of the tide, the slow increase caused by sea level rise is small, almost imperceptible. The difficulty of observing these changes is understandable, as anyone who lives along the coast can attest. Perhaps you have begun a nice walk down the beach that became a wet and wild adventure when you forgot to pay attention to the incoming tide. Or maybe the kayak you pulled way up the beach floated away when you neglected to tie it off. Neither of those situations is the result of some massive tidal surge, but rather the impact of slowly increasing water levels sneaking up on you.

Sea level rise is similar—small changes in the average height of sea level can be difficult to visualize until a windstorm combined with high tide brings local flooding. Increasingly, "sunny flooding" is occurring around the world, including up and down the eastern seaboard of the United States. These high-tide events are putting existing infrastructure and coastal communities at risk and are well documented—from TED talks to policy recommendations at the highest national and international levels, the impact and urgency of devising solutions to sea level rise are well understood. Unique among natural disasters, with sea level rise we have both the time and capability of adapting to these changes, but we need to plan for it now. For example, the San Francisco International Airport (SFO) will begin to flood with as little as 1.3 ft of sea-level rise, a height that may be reached in a few decades. Policy makers will of course invest in defensive structures to ensure major infrastructures like SFO do not flood, but current estimates of the global costs of protecting the coast with dikes and flood control are significant. In a 2014 report on sea level rise in the Proceedings of the National Academy of Sciences it was estimated annual investment and maintenance costs will be between US$12–71 billion in the year 2100. A more direct impact was articulated in a recent NOAA report which estimated that a mere 3 feet of sea level rise will permanently inundate 2 million Americans.

Specific estimates of impact vary at the local level. The question is not if, but when and how much sea level rise will create problems for our coastal infrastructure. Humans are the proverbial “frog in a pot of boiling water”—we urgently need to jolt our society into becoming resilient and start to adapt rather than react and rebuild as sea level continues to rise higher. Just like a walk on the beach during an incoming tide, it is possible to plan for increases in sea level rise. Creating this plan will happen faster if we motivate decision makers and the public by using the power in our pockets to show directly the impact of sea level rise.

Our initial concept was to create an augmented reality view of sea level rise using smartphones. The hook for users was to be the “gee whiz” aspect of being able to visualize what a high tide will look like in the future. Raising awareness about the impacts of sea level rise and strategies that can be employed for coastal resilience is a key aspect of our idea.

The basic premise is to use your smartphone as a "viewer" of sea level rise impact, using a simple overlay to indicate future water levels. Wondering what your favorite beach might look like after a couple of feet of sea level rise? Pull out your smartphone, fire up the app and watch the projection of sea level onto your camera view. Want to record what the beach looks like when the closest tidal gauge is at a certain height? Snap a picture, add a note and upload to an archive of other shoreline pictures taken with the app. Want to compare to other tidal heights? Browse the map and timeline for other images taken nearby. Engaging individuals in collecting their own data sparks conversations and interest in a way that showing a map of areas impacted by future sea level rise does not.

There are a number of current public outreach initiatives to raise this awareness using natural high tides combined with crowd sourced photographs to show the impacts of very high tides. In consultation with Washington Sea Grant, who leads this kind of effort each fall, we decided the crowd sourcing and indexing of pictures combined with tide and weather metadata from NOAA databases is the best Minimum Viable Product (MVP) upon which to build further functionality. There are many tide and current phone applications. Sea It Rise is different because our goal is to highlight sea level rise impacts rather than short term tide and weather. Local sea level is controlled by tide height, significant wave height, storm surge and wind. Our application leverages real time data provided by NOAA's Co-Ops tide gauge data and the National Weather Service Marine Forecasts.

For projections of Relative Sea Level (RSL: a function of both global average sea level and local effects) we will integrate data available from NOAA's Office for Coastal Management, which already has a GIS data layer of RSL available. Other efforts that model sea level rise can be integrated via GIS if appropriate, such as the recently announced CoSMoS-COAST model created for California. Importantly, private industry is already providing location based risk-assessment products for sea level rise, such as the efforts from Coastal Risk Consulting (https://floodscores.com/). These products will be straightforward to integrate via API calls, providing our users with a useful product for evaluating their risk; being able to expand the sales channel for such products offers a nice path to monetization for our application.

The basic data needed to effectively visualize sea level rise for a location is provided, with some margin of error, by sensors available in the smartphone: GPS location and phone orientation. For monitoring efforts like the King Tides Project (http://kingtides.net/), crowd sourcing the collection of this data via a smartphone app is hugely beneficial. All image data will be shared under the Creative Commons Share Alike (CC:SA) license allowing for the wide dissemination of these photos to further our impact.

This app makes sea level rise personal. Users can take photos of their favorite piece of coastline and keep track of how it looks in different weather and tide conditions. Real estate agents and buyers will be able to connect to existing risk assessment products to see whether that million dollar view might get too close for comfort. Once we integrate AR technology, it will allow the user to stand on the shoreline, see the existing infrastructure nearby, and with just a couple of clicks see what a 5’ increase in the sea level looks like. Will I need to be swimming at this spot in 50 years? The app turns abstract numbers into something tangible. Everyone, from an engineer building or repairing a bridge to a homeowner thinking about building a second story on top of their beach shack, can see their risk. Augmented reality will help people see the future and use that knowledge to make better decisions today.
Link to your mobile ocean app
https://sea-it-rise.bitballoon.com/
Additional Technical Details
Sea It Rise Technical Implemenation.pdf
Image