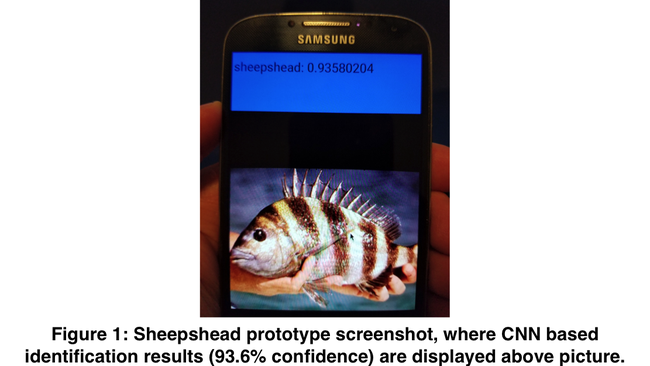 short description
Mobile application that automatically identifies fish species from a single photograph for informing the user of local catch regulations.
Eligibility
Mobile ocean app solution and impact
Solution:
There are no applications in the App Store or Google Play that can identify fish species from a digital photo. The development of an automatic fish identification application will improve regulatory compliance by taking the guesswork out of species identification and local fishing regulations determination. In addition, it will assist biologists with fishery health assessments and enable regulation enforcement on commercial fishing vessels. The benefits of this mobile application will be realized every time regulations are passed to a fisherman and every time a scientist attempts to identify a species while studying the health of a fish population.

Currently, fish species determination is performed through visual inspection of the specimen. The accuracy of the determination relies on the skill and experience of the individual performing the identification. Recreational fishermen do not typically have the means at their disposal to determine if their catch meets local regulations that dictate whether the fish can be retained or must be released. In addition, many recreational fishermen are not able to differentiate between species that have only subtle differences between them, which makes adherence to catch regulations nearly impossible. Moreover, there are no automatic monitoring systems deployed on commercial fishing vessels that verify compliance with regional catch regulations established by local fishery governing bodies. The scientific community is confronted by this problem as well. Today, fishery health is determined through the manual (visual) analysis of underwater video, analysis of dead fish, or through invasive underwater surveying techniques. Until there is a reliable and consistent method for automatically identifying fish species, the time consuming and expensive process of manual species identification will continue with no consistent method applied across the recreational, commercial, and scientific communities.

We have developed a standalone Convolutional Neural Network (CNN) that can identify selected species of fish found off Florida’s east coast and intracoastal waterways using only a digital photograph as input. To facilitate fish species identification anywhere in the world, our CNN will be retrained to identify thousands of different species. The revised CNN will power iOS and Android mobile applications that will enable the user to identify a fish instantaneously either onshore or out at sea.

A typical fishing use case, illustrating the application's current prototype display, is shown in Figure 1. This example shows an image of a Sheepshead captured by the user’s smartphone, possible species matches, and identification confidence values which are posted in the blue area of the application. In this case, our proposed CNN estimates the fish is a Sheepshead with 93.6% confidence. The additional features of the proposed application, discussed in the next paragraph, will be included in its final release in late 2017.

Figure 2 shows a mock-up of the final version of our application, which will place an abundance of information about the fish at the user’s fingertips. Available information includes, but is not limited to, local catch regulations, edible versus poisonous designation, endangered species status (if applicable), habitat information, and field guide caliber background information. The application will take the guesswork out of species identification and the determination of regulations that defined whether the fish can be retained or must be released.

Our application leverages data from the Fishing category of the challenge. The recreational fishing, commercial fishing, and scientific communities will see the largest impact. It serves as a tool for fishermen, biologists, and citizen scientists to automatically identify fish specifics using only a digital photo taken by their smartphone or other mobile device. Our product saves the user a significant amount of time, energy, and money, which currently goes into the manual identification of fish species. In addition, it aids in the preservation of fisheries and help prevent the extinction of endangered species through the availability of information that informs the users of the species type and population status.

App Impact:
Enforcement of existing catch regulations is vital for sustaining fish populations for commercial use, recreational activities, and species preservation. Species-specific catch limits and regulations (e.g., size, weight, number) are defined by regional fishery governing bodies that work to ensure the long-term sustainment of their fisheries. If regulations are not followed, overfishing will deplete fishery populations and could drive individual species to extinction, which will have a negative impact on fishing based economies and worldwide food supplies. Since regulations vary as a function of species, season, and location, compliance relies on the proper identification of the fish species and the local regulations that need to be applied.

For example, the Cod economy in the North Atlantic was decimated due to years of overfishing. It will take decades of hard regulation enforcement and population assessments for this fishery and the regional fishing based economies to recover. This type of economic disaster can be avoided through the effective communication of fishing regulations, autonomous monitoring of commercial fishing vessel catches for identifying regulation violations, and assisting the scientific community in the rapid assessment of fishery health. Enabling regulation monitoring and rapid fishery health assessments will allow local governing bodies to react to an impending economic crisis before a catastrophic decline in the fish population occurs that will take decades to recover.

The potential market penetration of our application is enormous. In 2011, the United States Fish and Wildlife Service National Survey estimated that over 30 million people above the age of 16 engage in fishing related activities. Moreover, statistia.com estimates that over 49 million people participated in fishing related activities and that annual fishing-related expenditures in the United States exceeded over $41 billion. The Pew Research Center estimates that 95% of Americans now own some type of a cell phone. In addition, Statistia.com has published findings that project over 220 million people in the United States now own a smartphone. Therefore, the potential number of users for our application could easily range in the tens of millions in the recreational fishing communities alone. Additional users would include: commercial fishermen, marine biologists, and citizen scientists. In order to achieve maximum market penetration and gain as many worldwide users as possible, a version of our application will be freely available on the App Store and Google Play. The benefits of such a mobile application would be realized every time regulations are passed to a fisherman and every time a scientist attempts to identify a species while studying the health of a fish population.
Link to your mobile ocean app
https://rink.hockeyapp.net/apps/c528b51ca4fd4d9e95e4f290162e182c
Video Explanation
Image