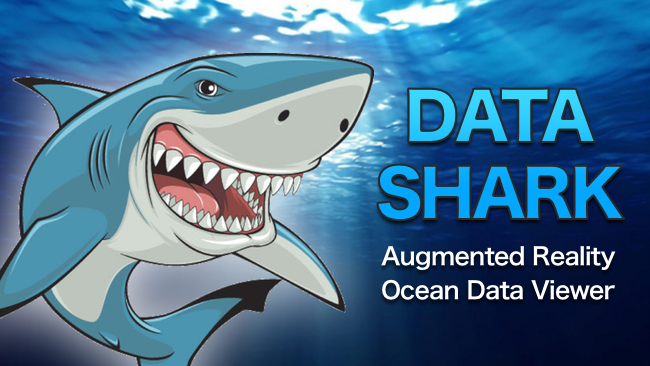 
*** OUR BACKGROUND ***
We have been developing mobile apps for both iOS and Android since 2012 and have experience in crowdsourced competitions.

This includes participating in the Global Learning XPRIZE (Placing in the Top 30 cohort, of 200 international teams as "Team Midnight Illusions" -- http://learning.xprize.org/news/global-learning-xprize-team-midnight-illusions) and achieving First Place Winner in a local Hackathon challenging teams to combine multiple location-based databases into a visually useful and relevant application -- www.guelphmercury.com/news-story/5476565-hackathon-apps-help-residents-wade-through-guelph-s-open-data/

We also have previous experience visualizing database details on a Google Map or iOS Map and have recently completed an Augmented Reality add-on to an app using the very engine that is at the core of Data Shark AR.


*** HOW DATA SHARK AR WORKS ***
Simply hold up your phone in AR mode to the ship or body of water (or anywhere) in front of you and view ship data and distance info. instantly! Tap the summary data for more detailed info. about your ship of interest.

✔ SEARCH BY MMSI OR LATITUDE/LONGITUDE
- Enter a ship's MMSI number and locate it anywhere in the world. This includes Grandma's cruise ship.
- Enter any latitude/longitude and see ships within a 200km radius of that location.

✔ INCLUDES REAL-TIME EXAMPLE
- Landlocked?
- Don't have any MMSI or latitude/longitude numbers to play with?
- Head to the "More Options" section of the app.
- Tap "Browse Example" and view ships in Aberdeen, Scotland!


*** INNOVATION AND DATA ***
Data Shark AR represents a NOVEL AND EVOLUTIONARY new way to interact with Big Ocean location-relevant data in a highly efficient and 360° context-aware manner. The initial "Ships 'n Sails" version of the app also represents only the beginning of an evolving and OPEN-ENDED APP SOLUTION.

We look forward to growing the Data Shark AR app for the ocean community. The cross-category, cross-industry, potential is very exciting!

__Potential Impacts and Benefits__
Data Shark AR positively impacts any user who has a need to track ships, either for industrial, economic, environmental, community or personal application. By bringing ship data into an Augmented Reality 360° space, THE DATA BECOMES SIGNIFICANTLY MORE CONTEXT-ENRICHED and relevant, allowing users to harness and apply the data more efficiently and effectively.

From something as simple as a tugboat operator identifying one of the 5 boats in front of them at the harbour, to the Coast Guard crew keeping an eye on dozens or hundreds of vessels in their area, to the casual user wanting to find out the name of that cool cargo ship docked at port, anyone can just hold up their device, bring the ship(s) into camera view, and work with the Augmented Reality overlaid data.

We have taken the traditional 2D flat map app experience and moved it to the next level. Whether the user is from an industrial, economic, or general community background, ALL USERS CAN BENEFIT from a more direct, context-enriched, and efficient 360° Augmented Reality data resource, allowing them to do their job better or just enjoy the convenience of what Data Shark AR has to offer.

In addition, as Data Shark AR can incorporate ANY type of Big Ocean dataset that contains latitude/longitude points, the future breadth of potential users increases exponentially. For example, ocean scientist users could track ocean temperature or ocean acidification changes in an Augmented Reality 360° space. Plastics and chemical pollutants could be tracked by environmental and municipal organizations. Even pirate activity could be more effectively tracked, with target vessels being instantly identified and seen in real-time, right in AR camera view.


*** ✅ YOUR VOTE = MORE DATABASES DEVELOPED FOR YOU ***
Starting with our "Ships 'n Sails" version for tracking ships, The Data Shark AR app is a proving ground for viewing real-time, near real-time, or static Big Ocean database sets in an Augmented Reality (AR) 360° space. We strongly believe that Augmented Reality (AR) experiences represent the next evolution of viewing and interacting with Big Ocean data. In real time. Right in front of you. Right on your device's screen.

As mentioned previously, Data Shark AR can turn almost ANY data set that includes location info. (latitude/longitude) into an Augmented Reality 360° interaction and YOUR VOTE allows us to continue work on this exciting app!


*** ABOUT OUR TEAM NAME ***
... because with a name like "Team Alpha SuperAwesomeCool Dynamite Wolf Squadron", truly anything is possible! 😎

And yes, the inspiration did come from Shrek: https://www.youtube.com/watch?v=GyobvtzCtLE


*** CLOSING ***
THANK YOU for your consideration. We hope Data Shark AR peaked your interest and we appreciate your time and your vote. We look forward to the opportunity to continue further in the Big Ocean Button Challenge!!! ⚓️

✅ PS Please give our app your vote of approval so we can make it even more awesome for you! Cheers.
Link to your mobile ocean app
https://itunes.apple.com/us/app/data-shark-ar/id1275116058?ls=1&mt=8
Video Explanation
Image