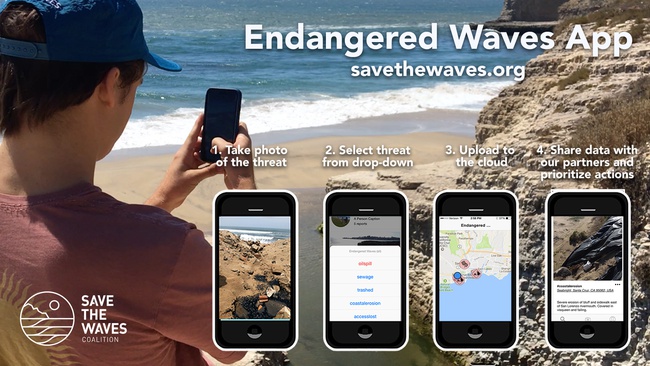 short description
The Endangered Waves App empowers and incentivizes surfers to monitor the health of their own coastlines through crowdsourced data.
Eligibility
Mobile ocean app solution and impact
Why this project is needed:

In every corner of the world there is a substantial lack of data on key coastal issues, especially as coasts alter with climate change. Issues such as water quality, trash / marine debris, and sea level rise / coastal erosion are exacerbated further by climate change. This need was highlighted recently by New Zealand’s Ministry for the Environment in a 2016 report which found that overfishing, ocean acidification, and lack of coastal data are the biggest threats to the country’s marine resource and coastal economies.

Many government agencies and NGOs lack data to prioritize threats and actions at the local level. Part of the hurdle is cost and personnel resources, and the other part is inherent difficulty collecting data on vast coastlines. As budgets in the industrialized world are cut for coastal agencies, and developing nations struggle with resourcing coastal agencies at all, this data gap is becoming more critical. Therefore, a cheap and reliable flow of large data surrounding coastal issues is essential.

Luckily, surfers routinely access some of the most hard to reach coastal areas where data are sparse and can serve as primary data sources. With an estimated 23 million surfers worldwide, and an estimated surf industry of over $7 billion annually, the potential of this network is massive. Surfing, as opposed to other marine recreational activities, is highly dependent on a clean and functioning coastal ecosystem, making surfers a motivated group to participate in this type of citizen science. Surfers also have a higher demand for an intact ecosystem as the threats listed above directly impact their health and ability to practice the sport. Stanford researcher Dr. Dan Reineman recently used a cross section of 4,000 surfers to crowdsource data on sea level rise changes in California, using the surfers' local knowledge of tidal conditions at their surfbreaks as a testament to their heightened sensitivity to coastal conditions. Further, industry studies also show the average surfer is more highly educated, technologically fluent, and is likely to carry a smartphone than the average citizen, making them an ideal user group for crowdsourcing this type of data.

The project further innovates in several ways: First, it uses an incentivized user group with a large industry behind it that relies on a healthy marine environment. Often times surfers are a group that is overlooked in its potential contribution to marine conservation. As mentioned above, this is a mistake as surfers are motivated by self-interest to keep the areas they recreate healthy and functioning. Furthermore, the surf industry also depends on these areas as the backbone of their market potential. Using both of these naturally aligned assets to disrupt traditional data gaps in the context of our changing climate is an innovative approach to further the Fund’s goal of climate change resilience.

The data and impact:

The project fills the data gaps at three levels (individual, organizational, and international) through cutting edge technology and design and tackles documentation of not just coastal issues, but also coastal solutions. Since the app requires a base level of action by the user, it galvanizes local stakeholders and, consequently, their immediate communities become more activated on issues facing their local coastline. The app's integration with social media enables user's to share critical threats beyond their immediate communities and will have the secondary benefit of driving greater app adoption. Because these coastal issues demand collective action from a broad coalition of organizations and institutions, the data architecture is designed to be compatible with other projects such as the Urban Tides project, the Marine Debris Tracker, Litterati, and other large data sets operating at a global level. Furthermore, the app helps local NGOs prioritize issues with automated sharing of localized data to relevant NGO's in the geographic area of the reported issue.

Last, the project encourages users through social, economic, and identity-based incentives to build a large network of adopters. Once the network is large enough, we can begin to answer geo-specific questions that affect public safety such as “What was the southern geographic extent of the Fukushima marine debris on the eastern Pacific coast?” or “What is the extent of the Refugio oil spill in Santa Barbara?” The potential for answering more complex questions will grow as the network grows but initial limited data collection will immediately contribute to localized coastal issue monitoring and response, while also contributing to the larger global collaboration to unify data around these critical issues.
Link to your mobile ocean app
https://beta.itunes.apple.com/v1/invite/154ce2e64aea48ef8f2ca30aeefe9871d0f41ec851f0472ab2e840b3dcf3db0a47ae18cd?ct=53F2SPQ7TV&advp=10000&platform=ios
Video Explanation
Additional Technical Details
Endangered Waves Pitch Deck.pdf
Image