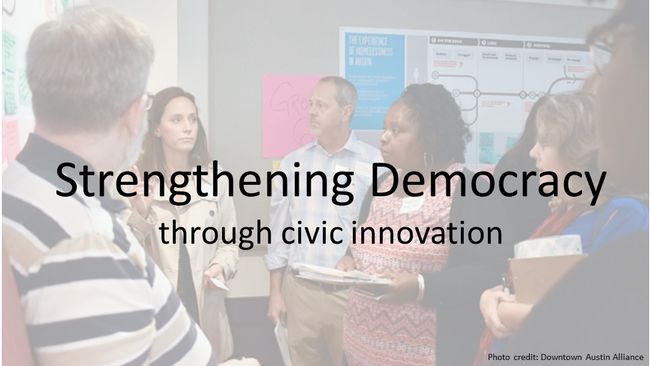 short description
How might we better engage communities on issues and opportunities that affect them using civic technologies and co-creation?
Your Story
What are you passionate about? [public]
I'm passionate about strengthening our democracy. I believe we have a lot of room for growth toward meaningful community engagement in the U.S and throughout the world. I envision a more open, participatory and collaborative relationship between the governed and their government.

I believe government's greatest asset is the power to convene and serve as a platform that empowers communities to solve their own challenges and explore new opportunities.I'm passionate about building a bridge between government and the governed, between policy makers and social entrepreneurs.
Your Prize Concept
If you are selected as a Visioneer, you will develop a prize concept in collaboration with a company sponsor, fellow innovators, and the XPRIZE team. This may or may not be the challenge concept you propose in this application.
What do you prize? [public]
I prize the power of people collaborating together to overcome the most difficult challenges and realize the most amazing new opportunities.
What Grand Challenge do you propose a prize competition should solve? [public]
The Strengthening Democracy XPrize is about bringing more people into the democratic process through civic innovation - people who have traditionally been disengaged or feel that their participation doesn't make a difference. It's about closing the feedback loop and giving people meaningful ways to engage.

It's also about bringing a diverse group of people together and co-creating solutions to our most difficult challenges. According to the Pew Center, "Republicans and Democrats are more divided along ideological lines – and partisan antipathy is deeper and more extensive – than at any point in the last two decades." Yet, I've seen that when small groups of people get together to work on something, they can show one another respect, listen to each other, and find that they have more in common than they thought.

Social media emerged as a powerful tool for democracy - catalyst for the Arab Spring. However, we've also seen how it can serve as an echo chamber, calcifying divisions among ideologies. This challenge prize is about giving more people, and diverse groups of people, the tools they need to collaborate and co-create together.
What would the world look like when the Grand Challenge is solved? [public]
People will have a better understanding of how they can meaningfully contribute to the decisions that affect them most. Government will genuinely and consistently look to the governed as an asset - a capable crowd of problem solvers and innovators that, if empowered, has the potential to help solve public challenges and realize new opportunities.

A stronger democracy will be a more inclusive democracy. Not everyone will get their way, but if people feel that their voice is heard and considered, and that the decision-making process is fair and transparent, then we've made great progress.