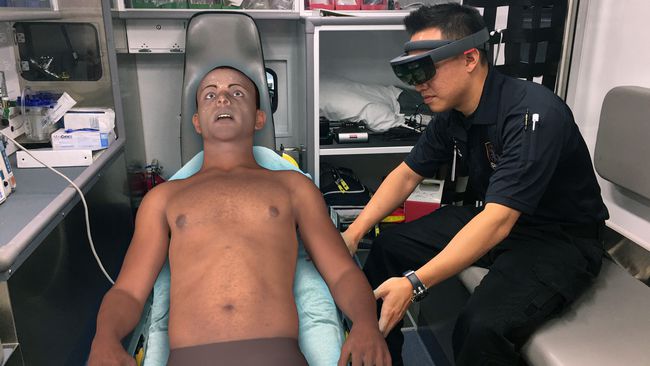 Upon arrival at a scene, an initial assessment of the nature and extent of the incident. Trainees can demonstrate if they correctly assess/secure the scene. Here is a partial list that can be modelled in our system given the sufficient 3D/audio assets, such as:
- Avoid unnecessary contamination of equipment.
- Use of adequate protective equipment while recovering shipping papers or manifests.
- Avoid exposure while approaching a scene.
- Do not approach anyone coming from contaminated areas.
- Do not attempt rescue unless trained and equipped with appropriate PPE for the situation.
- Report all suspicious packages, containers, or people to the command post.
- Immediately establish an Exclusion (Hot) Zone, taking care not to become exposed during the process

Scene 2 Performance Metrics: a. Time to establishing scene safety. b. Ability to communicate level of threat and required resources to address the threat. c. Time elapsed to administering lifesaving interventions based on presentation. d. Proper notification to local hospitals to prepare for threat/ exposure.
Measurements
PerSim can automatically record the following data: trainee/instructor speech, trainee gestures, time taken to perform an action / simulation state change, when/ if actions were performed (see scene descriptions for detailed actions), depth and RGB video of where the trainee is looking, head orientation, head position, scene map.
Based on this data, PerSim can measure:
- Setup time at an emergency scene and reattempt rate – this can be measure through time elapsed between states and between user interactions.
- Accuracy of completing a task (based on virtual patient state)
- Accuracy and precision of location based technologies: On average, this is actually already known for static scenes based on the Hololens’s scene mapping technology. However, having many moving real objects in a scene can disrupt and hinder tracking performance. For this, we can look at how many remapping operations are being performed
- Speed from communication to resulting action, Precision and granularity of voice commands. PerSim can record real time audio from the user and instructor. Thus we can analyze speech patterns and communication frequency, as well as test the correctness of PerSim’s voice command recognition and look at how this impacts performance time.
- Measure multiple technologies on one task—such as, visual, auditory.
- Enabling operations vs. distracting from operations. Because the PerSim simulation is state based, we can infer how distractors impact subsequent states.
Supporting Documents - Visual Aids
herox Figures.pdf
Video Link
https://vimeo.com/215900378/f59c412ac8