HeroX would like to offer our deepest gratitude to everyone who has shown an interest in the High-Performance Fast Computing Challenge thus far. Your enthusiasm and desire to improve the world are what creates game-changing breakthroughs to some of the world's toughest and most pressing problems.

Unfortunately, we are tasked today with announcing some disappointing news for all of us.

After careful deliberation, NASA has decided to cancel the High Performance Fast Computing Challenge competition it announced six weeks ago.  See below to see the full text of NASA’s press release explaining their decision.

But don’t despair, friends! The best thing about HeroX is that there is always another way to contribute. In fact, today we’re announcing a pretty fun one: it’s called The HeroX Fortran Storytelling Competition.  We have already seen some good stories about Fortran in reaction to the High Performance Fast Computing Challenge, and we want to hear more. There is a total of $1,750 up for grabs for the best Fortran Stories shared on video!

And if you were really excited to contribute to NASA’s space missions, we’ve got another coming soon.  Sign up to be the first to hear about our upcoming NASA project involving CubeSats. 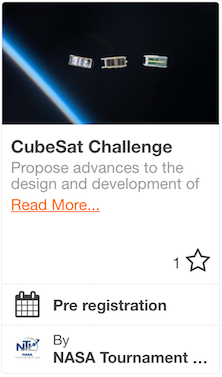 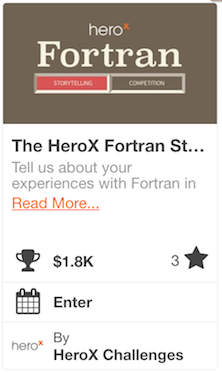 After careful deliberation, NASA has decided to cancel the competition it announced six weeks ago that was designed to solicit the public’s help in speeding up its Pleiades supercomputer software.

Called the High Performance Fast Computing Challenge, the contest was designed to reward qualified contenders who could change the agency’s FUN3D design software so that it could run 10 to 1,000 times faster without a decrease in accuracy.

The extremely high number of applicants, more than 1,800, coupled with the difficulty in satisfying the extensive vetting requirements to control the public distribution of the software made it unlikely we would achieve the challenge’s original objectives in a timely manner.

NASA looked at several alternatives to keep the challenge design intact – things like significantly extending of the challenge performance period, and offering a much smaller portion of the code. Neither were considered viable options.

'We truly appreciate the huge amount of interest shown in this challenge,' said Richard Barhydt, deputy director of NASA’s Transformative Aeronautics Concepts Program. 'It shows that people support what we’re doing and wants to get involved.'

At this time, NASA has no plans to reorganize and offer this particular challenge again. However, the agency firmly supports the use of prize challenges to solve difficult problems and engage a broader community in agency activities.”