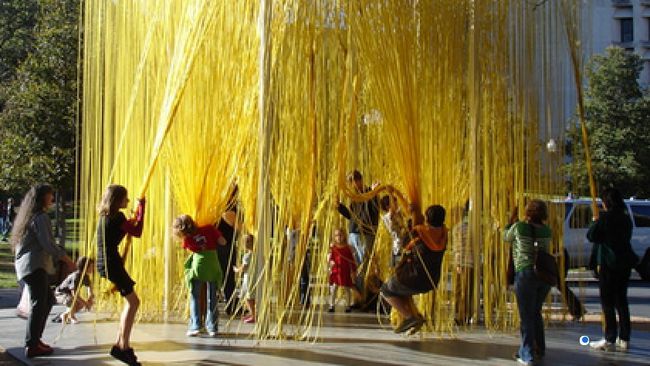 short description
Nature's healing setting with a bold, innovative playground melts worries and brings happiness, fun, and relaxation to the waiting room.
Eligibility
Unfold your idea into a story connected to a specific situation (max 5000 characters)
Ellen arrived at the hospital with her three children, 4-year-old son Adam whose hand she held tightly, 12-year-old Andrew, and 6-year-old Anna. They were nervous about the tests Adam was going to have.

When they arrived at the check-in room they entered what resembled an innovative park and playground in the woods, complete with the gentle sound of singing birds and crickets. (Numerous studies show how being in nature is a powerful way to relax the nerves and delight the senses.)

Plus, what’s a place that most children of all ages love?

Research shows that children’s social and cognitive development can be enhanced not from cookie cutter typical playgrounds, but unstructured ones, known as “child directed play” where kids aren’t pigeonholed into any certain type of play. Instead let kids figure out what to do.

Their first reaction to what they saw was, “cool!” The children were immediately attracted to the hanging multi-colored rubber tubes, and began playing with them. They were so engrossed with what they could do with them, like tie them in knots, climb them, swing on them, or just run through them. Andrew and Anna forgot everything else and laughingly joined other children and parents in imagining what else to do with the tubes!

Nature is brought in the waiting room for this holistic playground that helps soothe and delight physically, mentally, and emotionally.

They then all then walk on a curvy path winding through fake, but real looking grass to the fun check-in desk, which was built into a tree trunk. Checking in feels like they’re checking into a camp. Gone are the straight impersonal lines of a typical hospital and the imposing desk. Nature is full of curves.

In order to make space for children and adults in wheel chairs and other mobility assistance devices, the focus in on a playground set on a flat surface, with several large comfortable seating areas.

Adam dropped his mother’s hand and eagerly began to explore the surroundings with Andrew and Anna while Ellen filled out the necessary forms.

They saw a “mimic” skeleton that mimicked every movement they made, eliciting peels of laughter from the three of them. Laughter is healing, and a great tension breaker.

Healing medicine here is play, relaxation, movement, expression, and fostering community. It sounds so simple, but numerous studies show the impact these simple modalities can have on a person. It’s profound. Not only is this place fun, but also everything in the room has been tried, tested, and shown to help lift the spirits (emotionally and physically) of the children and parents alike. And everything has a proven purpose. You don’t have to re-invent the wheel. Simply do what studies show works, which is what has been done here.

While at the picnic table they notice the silent disco that has headphones with blinking lights, and a dance floor. A silent disco is perfect for a hospital since only the people with headphones can hear the music. The mascot called Huggable Hound asks them if they want to dance. They began dancing and laughing with the headphones on, and others enjoyed watching them have a good time.

They were no longer dwelling on Adam’s tests, but instead their attention was drawn to other things in the room. They heard the soft trickle of water, and noticed a waterfall on a wall with both a fake frog and large turtle below, and colorful ladybugs nearby.

People lift each other’s spirits. Ellen and Adam climbed into an inviting tent bed and briefly snuggled together. The tent beds are also good for a child who is too ill for activity, but avoids loneliness by being around others.

The hospital encourages children to come and play so those who are staying there have others to play with. Kids like making friends, and that makes their stay more pleasant.

The mascot Huggable Hound came to take the now happy and relaxed family to the treatment room.

One study showed when kids are asked what makes them happy, numerous kids reply with play, being with friends and family. This hospital generates happiness, community and stimulates the imagination. Albert Einstein said, “Imagination is more important than knowledge.”

The mascot tells them that they can come play there anytime since the hospital encourages community.

This was a day they'll all fondly remember.
How can your idea be implemented? Who can be a partner or supplier in realising it?
These ideas are based from worldwide research projects on what kids love with play and community.

Why reinvent the wheel when the research has been done and they already know what works and doesn't work. Therefore, the developers and inventors are contacted and they duplicate what they've already done.
Additional Material
ElaineWilkes3104478446.pdf