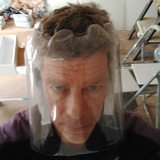 Add upstream dams where possible, build in normal river flow bypass channels at edges of new reservoir to divert river when cleaning out upstream resevoir.
With upstream dam and river bypass in place, lower dam can be run low over time (typically dry season) and then stop diverting river (or have the diversion built around existing dams) and fill up stream reservoir, while cleaning out lower reservoir.
1) solve challenge
2) solves not yet sponsored challenge? for pump hydro adds.
3) Solve not yet sponsored challenge to add to existing Dams safety factor for flash floods and earthquake disaster minimization. (Reference Orville dam near catastrophic disaster. It is the perfect site for this demonstration, noting the neck down between the two main sections of the reservoir, where two water sheds meet, with two main rivers flowing into lake.
Looks to be smaller than 1/10 the existing dam area or less!
19 Replies
reply

Petr Mík July 20, 2020 10:50 p.m. PDT
An interesting contribution, but I just want to ask what would be the financial value of this project? (approximately)
reply

7 Billion face masks July 21, 2020 8:53 p.m. PDT
@Petr Mík
Very very site specific.
Some can have the highest ROIS on the planet, other the worst.
Take the orville dam site.
That would be one of the lowest cost to produce.
How much is not washing away half of a large city worth?
How much is uprating pumps?
Cost is 2 to 4% of new dam for the same
power output add.
But without pumped hydro you run out of water with up-rating the dam outputs oneway.
Storage is the most valuable thing we can add as a society.
It diminishes quickly as we add beyond duck curve slaying amounts (5-10%).
pumped hydro allows for not depleting dams with one way flow as do batteries and other forms of storage.
If it can be integrated with sediment removal of big and small dams its a win win that lowers everyones costs.
Tagged:

7 Billion face masks July 22, 2020 6:01 a.m. PDT
@Petr Mík
I provide solutions, not accounting.
Just one mind, do you have financial expertise?
Would you like to help?
My solutions are based on an acceptable ROI.
Pumped hydro is the cheapest form of storage.
Storage is the fastest growing segment in energy, and will be for a while.
Even higher growth rates that solar.
Combining cleanout of sediment with a revenue stream will be the cheapest solution possible.
How could I possible have $#s for a concept that no one has funded?
Tagged: 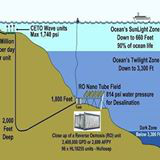 Naturale Desalination July 22, 2020 10:25 a.m. PDT
Pumped Hydro - This is Great. Have you thought of making a new high reservoir near coast, so that you can pump up seawater to reservoir to use energy and returning seawater to ocean to generate power when needed. Ocean or any large body of water can do this. Salton Sea water can be pumped up for storage and generate power on the way back to Salton Sea when power is needed.
Modified on July 22, 2020, 10:26 a.m. PDT
reply

7 Billion face masks July 22, 2020 9:10 p.m. PDT
@Naturale Desalination
That has been proposed by others.
Salinity degrading water tables is an issue.
But it has some places that it can still work, low environmental impact sites.
Away from populations and low ingress inland are key.
The best idea I had to add to this was to build a reservoir out of lava tubes.
Or couple with off shore wind and deliver either electricity to on land pumps and reverse osmosis or other water purification technologies, or integrate the RO into the wind turbine platform and pump fresh water to reservoir.
I had also proposed using a reservoir for emergency cooling water and drinking water.
with the nuclear plant providing power to the RO and uphill pumps.
Down hill reservoir add, allows pumping between.

Also a thought on your pipe concept.
If the pipe (Or a second one) was near the river mouth to the reservoir, it would not be as deep and would not have as much volume that could flow out if damaged or clogged, because it is so shallow at river mouth area.
This could catch most of the sediment that settles out at river mouth.
Then on drought years when the dam is uber low, can use the deep tunnel with lower risk with low lake level.
A movable floating dredge hooked to the pipes can clear out larger areas as well, and have debri filters at the surface, not deep.
Oh, that's good, that may fix the safety issues with a deep pipe close fail scenario.
If it clogs at the dredge its not in the pipe. it can be cleaned out safety, turning off pipe valve while cleaning debry at water surface from machinery.
Tagged:

Petr Mík July 22, 2020 10:53 p.m. PDT
@7 Billion face masks
I would like to help your project in the search for a reduction in the financial value of your project.
Tagged:

7 Billion face masks July 24, 2020 12:25 a.m. PDT
My mind jumped to small house built with a cement extruder that was a like a large 3d printer that kept building the walls.
Is this what you are suggesting?
reply

Petr Mík July 25, 2020 10:25 p.m. PDT
The aim of building the second tank through 3D printing is to speed up the construction of the second tank and reduce the financial value of this project.
Tagged:

Naturale Desalination Aug. 9, 2020 3:50 p.m. PDT
Oroville Dam is pictured below - Where is your secondary upstream dam going to go? How much extra land will it flood?
Attachments 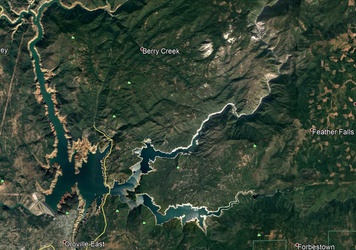 7 Billion face masks Aug. 9, 2020 8:59 p.m. PDT
@Petr Mík
The financial contribution is the pumped hydro is a revenue stream and a sediment removal stream as well.
Both increase utilization of the dam, the electric generation when upgraded and or uprated for two way flow and any flow rate increases that make sense for that watershed.
The pumps can be used for te sediment removal process, when low need for pumped hydro power.
This can be done when low usage of power (nightime) or when solar and -or wind are in excess. This allows for capturing future renewable power curtilment.
The directly results in added income that could not be otherwise captured.
1) Just hydro pumping
2) Sediment only pumping
3) Both hydro pumping and sediment pumping.
4) or power for large sediment ladders.
5) Upper dam keeps sediment out of main dam and results n much cheaper sediment removal over time without draining the main lake.
6) sediment taken to ridge lines and sorted can capture energy when taken down mountain side if done with electric vehicles as is done on mountain top mines now.
Tagged:

None, no extra flooded land for this example.
This is an example that breaks the two parts of the dam into 3/5 & 2/5
The yellow line in the picture crosses the narrow section of the two parts of the lake
It allows for:
Water to be pumped between dams for cleaning out the other without wasting water or wating for a drought year every decade to clean.
This allows cleaning each year in the late summer one of the two sides.
The extra dam can have its own turbines or use the existing ones at the main dams turbine house and just add the piping connections.
On your question about more land used, couple of points that need understanding for context.
Pumped hydro takes a samll fraction of alnd compared to a one way dam.
Pumped hydro land use is a fraction of one way dams.
1/100th to 1/10,000th the volume of a one way dam such as Orville dam. But every location is unique and must use what the topology allows. The surface area is smaller than the volume and can be approximated by triangular troughs, roughly 1/3 of it being the surface area of water to air that covers any new land use. So ~ roughly 1/10th to 1/100th surface area of water. Just the top would be 1/30th to 1/300th the surface area used for pumped hydro to one way hydro.
Depends where the sediment capture dam goes.
If it goes up stream of river it needs to add some land use.
If it is built with the dam surface area, so that water is on both sides f the dam when both are full then no land is used.
By having a way to pay for sediment removal with the pumped hydro synergistic income stream designated to sediment removal less land area is needed for water storage, because each dam with the system holds significantly more water than if no system to clean is present.
This easily swamps out any land use by hydro, just by itself.
Even more significant is the land use avoidance of building more one way dams instead of sediment + pumped hydro.
Pumed Hydro allows less land use not more land use, because more one way dams must be built for the equivalent storage of present, sediment filled one way dams.
If we add pumped Hydro to most foothill dams like Orville, we can drain Hetch Hetchy and return it to its natural prestine wilderness, without loss of water storage.
In the Orville 2nd dam, that was my idea during the near catastrophic collapse of the dam because the spillway was eroding the dam base.
sediment dams at mouth rivers can be built, but may not be needed in this example. Since water can be stored in either section the other can be cleaned out with normal earth moving equipment, without the capitol cost of adding catchments dams at river mouths.
Tagged:

Naturale Desalination Aug. 11, 2020 3:38 p.m. PDT
Physics will not allow you more electrical power by splitting an existing Reservoir into an upper and lower portion. Also each time you move the water from the lower to upper it will cost you about 10% of what you can recover. Typical pumped hydro location have a 100 to 300 foot difference in elevation, which is not possible by dividing up a reservoir. Your idea show creativity, but I do not see it as viable. Second is your assumption that simple excavation equipment will be able to easily and quickly clean up needed debris, I do not agree with, because getting heavy equipment down, working is sludge and back out of reservoir just seem a near impossible task to me.
reply

Geothermal Power is CA's and the worlds greatest potential power provider - IMO. Second best is to have a ridge road at top of mountain ranges with wind mills all along it and the road would provide route for underground power transmission lines and serve as a fire fighting break. Third is rooftop Solar.
Post Your Reply
We were able to work with HeroX to draft challenge guidelines, promote the challenge to a targeted audience of interested parties, and ultimately draw a crowd of innovators from across the globe to submit proposals to address our challenge. We were quite satisfied with the number and diversity of both individuals and proposals that the challenge drew.